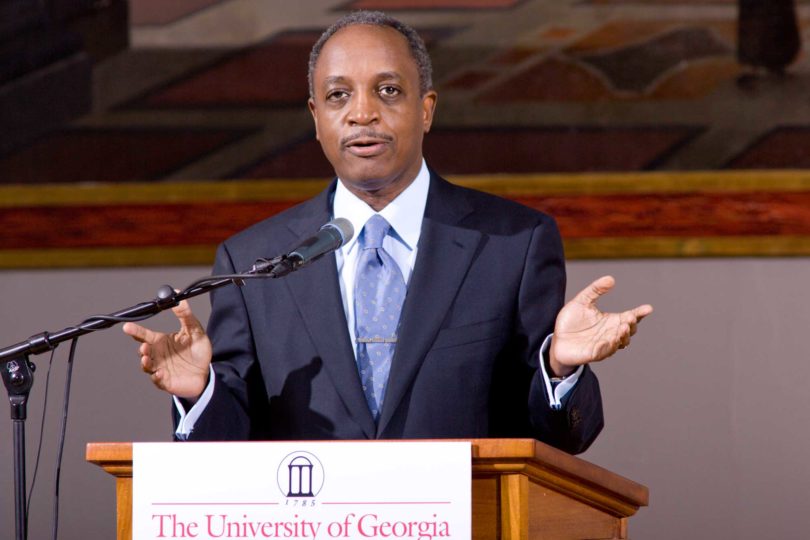 Georgia Department of Labor Commissioner Michael Thurmond urged students to work with others "beyond their comfort zone."

Illuminating some hidden aspects in the story of UGA’s first African-American students and urging students to work with others “beyond their comfort zone,” Georgia Labor Commissioner Michael Thurmond delivered the 23rd Holmes-Hunter Lecture at the Chapel.

“(To be successful) you must build an alliance of people of all races, color and creeds,” Thurmond said.

Thurmond, himself a trailblazer for African Americans in the state and former lecturer at UGA, focused on forgotten members of the story behind the university’s desegregation.

“(In Hunter and Holmes’ day) if you were a person of color, it was impossible to get your hands on an application to the university,” he said. “But a janitor—a janitor who will remain anonymous—somehow allowed two applications to fall into his lunch pail.

“There are others who should receive further recognition for their roles in the struggle,” Thurmond also said. “After Charlayne Hunter and Hamilton Holmes were suspended from school for their own safety, a group of 300 white faculty members signed a petition demanding that the suspension be overturned.”

It was a similar strategy that Thurmond himself used to shatter the trappings of his own misconceptions early in life and hoist himself toward unprecedented success.
After graduating from a newly-integrated high school in Athens and finishing college in South Carolina, he returned home and promptly lost two elections. His campaign strategy of turning out the African-American vote wasn’t succeeding, so he had to rethink it, he said.

After a midnight revelation, he proposed a new plan in the spirit of unity: He asked people of all demographics to vote for him. His idea worked. In 1986, he was elected to the Georgia General Assembly from a majority white district. When he took the office of labor commissioner in 1998, he became the first non-incumbent African American elected to statewide office in Georgia.