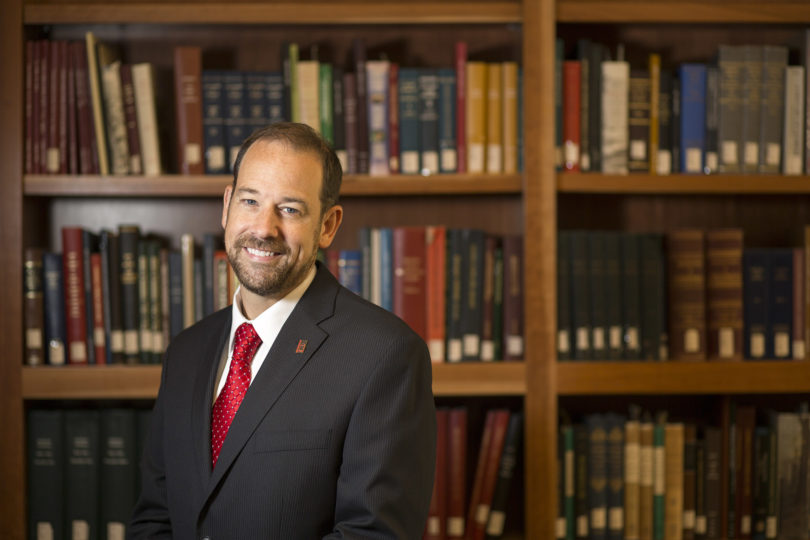 Libraries are able to share information for instruction and research with greater capacity than ever before thanks to digitization and the Web.

P. Toby Graham, university librarian and associate provost, has been at the forefront of that change.

Now Graham, who became university librarian in September, is leading UGA Libraries’ effort to offer greater access to information for the university community and beyond. In addition, staff at the libraries are working toward goals of contributing to student success, offering effective learning environments and publishing high-quality works of scholarship and literature.

Graham’s interest in libraries began with his studies in the humanities. As a graduate student at the University of Alabama, Graham was working on his master’s degree in history when he started thinking about his career path.

“I was looking for a career in which I could use my interest in the humanities and history,” he said.

What piqued Graham’s interest in libraries was technology and historical texts. He found this intersection working in library special collections, which he describes as housing “the raw materials of history.”

Graham worked toward digitizing special collections, which made these rare documents more accessible to scholars around the world, while earning his master’s and doctorate in library information studies at the University of Alabama. This effort continued when Graham directed the Digital Library of Georgia, which now receives more than 4.5 million page views per year. That job brought Graham to UGA in 2003.

With UGA Libraries composed of a range of resources, including several physical libraries, digital libraries, the University of Georgia Press, The Georgia Review and the Miller Learning Center, Graham envisions four key areas of focus for the libraries.

The first is ensuring the libraries are “providing the best possible access to recorded knowledge,” Graham said.

As part of this focus, UGA Libraries is undergoing a comprehensive review of its collections spending.

“It’s the most comprehensive review we’ve done in at least 25 years,” Graham said. “We are making sure we have the best possible alignment of what we’re spending for library collections and the needs of the university.”

The review is expected to conclude later this year.

Another focus Graham emphasizes is the concept of the “teaching library.” Graham said the libraries “engage in some kind of teaching” with about 18,000 students each year. The libraries do this through teaching research skills and information literacy as well as by offering research consultation.

UGA Libraries engages students with innovative teaching at the Richard B. Russell Building Special Collections Libraries, where instructors can teach with the special collections holdings.

The UGA Libraries also will continue to serve as a space for students to learn.

“We try to think of the library, not only as a repository, but also as a student-centered learning environment,” Graham said.

That is why UGA Libraries—partnering with UGA’s Enterprise Information Technology Services and the Center for Teaching and Learning—has ensured that the Miller Learning Center is open 24/7.

UGA Libraries also has seen the renovation of the science library and the reading room of the fourth floor of the main library. In addition, Carnegie Library on the Health Sciences Campus is under renovation and is scheduled to reopen in the summer as an open learning commons for students, Graham said.

“We also are creating spaces where students can engage in experiential learning and create new knowledge,” Graham said.

Examples of projects in development include a Maker Space at the science library for technologies like 3-D printing, offered in partnership with the Office of the Vice President for Research and the Thinc. at UGA initiative; a digital humanities lab at the main library, with the Willson Center for Humanities and Arts and others; and improved GIS support at the main library.

Finally, Graham said UGA Libraries will continue to thrive as publisher through the University of Georgia Press and The Georgia Review, which are housed in the main library.

“Both are quite distinguished, award-winning, successful publishing operations,” Graham said.

Ultimately, the UGA Libraries’ objectives revolve around supporting research and the academic goals of faculty and students. Therefore, Graham said, it is important for the libraries to have strong communication with those stakeholders. Each discipline is assigned a library liaison, and he encouraged faculty to engage with them about the resources and instructional support necessary for their work.

“We exist to support the mission of this institution and its strategic directions,” Graham said. “We welcome feedback from faculty, staff and students to better understand how we can better serve the needs they have.”