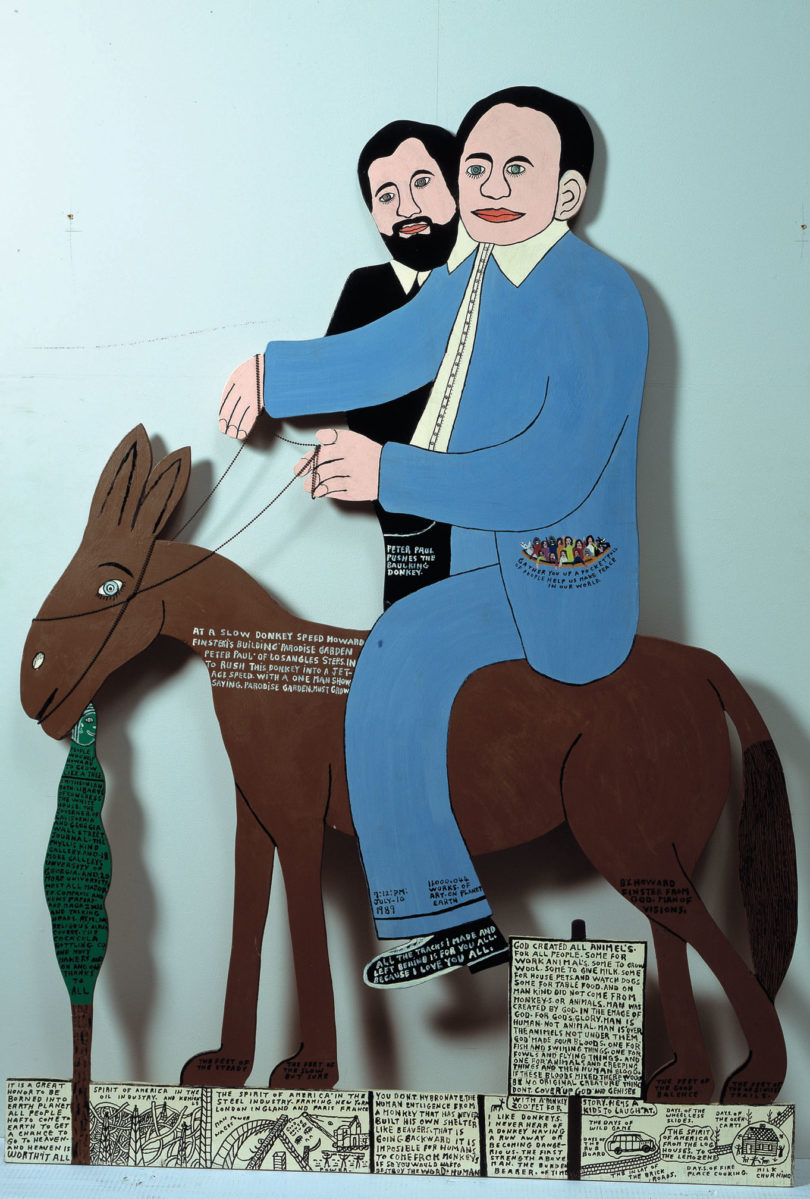 Georgia Museum of Art to hold lecture on ‘Will the Real Howard Finster Come on Down?’ in conjunction with the play.

Athens, Ga. – University of Georgia Theatre, in collaboration with Atlanta’s 7 Stages Theatre, will present the world premiere of “Hidden Man” by playwright Pamela Turner based on research by Russell Blackmon. “Hidden Man” will be performed Feb. 23-25 and 29 and March 1-3 at 8 p.m. and on March 4 at 2:30 p.m. in the Cellar Theatre of the Fine Arts Building.

In conjunction with the production, the Georgia Museum of Art will present a lecture titled “Will the Real Howard Finster Come on Down?” given by Carol Crown, a professor of art history at the University of Memphis. The lecture will take place in the M. Smith Griffith Auditorium Feb. 23 at 5:30 p.m. Crown will discuss the values and religious beliefs embraced in approximately 46,000 creative and complex works of art by backwoods country preacher Finster.

Following the UGA performances, the “Hidden Man” production will move to 7 Stages in Atlanta’s Little Five Points for a three-week run.

The cast as well as the scenic, costume, lighting and sound designers are students or faculty at UGA-including associate professor George Contini in the role of Howard Finster and junior theatre and English major Malcolm Campbell-Taylor in the role of Robert Sherer-will join the 7 Stages production in Atlanta.

“Hidden Man” tells the true story of an unlikely friendship between Sherer, a young, gay, nihilistic punk artist from Atlanta and Finster, a visionary, conservative, Baptist preacher turned folk artist. The story moves between Sherer’s artistic life in Atlanta and Finster’s four-acre folk art “Paradise Garden” in the north Georgia mountains in the early 1980s. It explores the uneasy harmony between artists whose worldviews and temperaments are at opposite poles. This is exemplified not just by their visual art but also by the contrast between sacred harp shape note singing and 80s punk rock, two musical styles that clash and intertwine throughout the play.

The production explores the tropes of vision and dreams, the strangeness of an “outsider artist” and the “good old” South. “Hidden Man” ultimately unearths the reason for creating art and being an artist, which together mark the worlds of both characters.

“In my 32 years as artistic director of 7 Stages, we’ve done many plays that take up the subject of the relationship between the artist and society,” said Del Hamilton, artistic director of 7 Stages. “As unemployment becomes an issue for upcoming grads [in the arts], what is our obligation to tell them the truth? I’m concerned with the spiritual issue of the artist’s role, how he/she fits into and is treated by society.”

Hamilton said that “this young nobody punk,” Sherer, is in the process of learning how to be an artist and how to be an atheist during the strange summer he spends with Finster, “an unsettling, deeply religious preacher who, in the course of the play, is becoming an internationally known artist. These two come together, and there’s something spiritual when people get in the same room together and start exchanging energy.”

Turner is working closely with Hamilton and the UGA production team on the production. “At its very center,” she said, “I envisioned ‘Hidden Man’ as a coming of age story colored by the clash of the old and the new South. But it also became a play about authenticity of place and of person and of soul, and about ‘growing from where you’re planted.'”

Turner drew on Blackmon’s original research to develop the play. In the year before Finster died, Blackmon had interviewed both Finster and Sherer.

During the Georgia Museum of Art lecture, Crown will focus specifically on Finster, a born-again Baptist who called himself a man of visions, a second Noah and God’s last red light come to save the sinful. He gained international acclaim for Paradise Garden, an outdoor park he built in Summerville, with its wedding-cake styled World’s Folk Art Church. Additionally, Finster gained widespread notice in the 1980s by designing album covers for bands such as R.E.M. and Talking Heads. Finster’s art is often associated with his strong evangelical faith and the teachings of Christian fundamentalism.

“I think this lecture will help us learn more about Howard Finster from an expert,” said Carissa DiCindio, the museum’s curator of education. “We planned this lecture to complement the theatre production of ‘Hidden Man,’ and audiences will benefit from attending both events.”