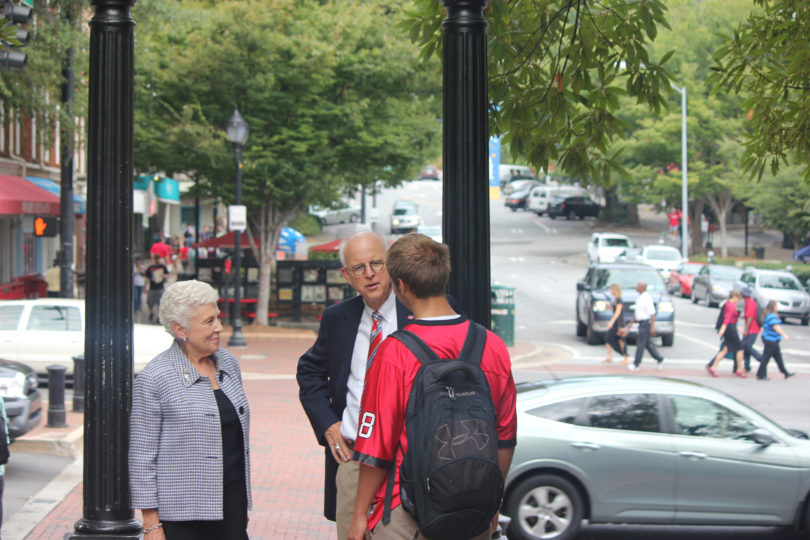 After working decades in the banking industry, C. Patrick Allen began a new career at UGA in 2003 at age 57.

His new job—as the university’s first director of community relations—was to ensure that as UGA expanded, it continued to be a good citizen in the surrounding community.

One of Allen’s priorities was to increase cooperation and trust between “the town” (of Athens) and “the gown” (UGA). Since then, officials from the university and the Athens-Clarke County Unified Government have partnered on a number of projects to improve the local community, and UGA faculty and staff have continued to play a key role there as well.

Allen retires from his second career June 30 after 12 years spent helping the university balance its needs with those of the surrounding community by fostering connections.

Allen came to Athens as a banker in 1985. He was active in the community, serving as chair of the commission that consolidated the Athens and Clarke County governments and as interim president of the Athens Chamber of Commerce.

Not long after he retired from banking, Allen learned that the university was seeking a community diplomat.

There were two major needs to address. The first was confronting concerns from some Athens residents that the growth of the student body and the university as a whole might hurt neighborhoods. UGA also needed to develop closer ties with the Athens-Clarke County government.

“The university needed someone to wake up every morning and ask, ‘How will what we are going to do today at the University of Georgia impact folks in the community?’ ” Allen said.

Allen believes there has been a change of perception about UGA by members of the Athens community during his tenure.

“Now people know that the university cares,” he said.

This perception begins with the work of UGA employees in the community. UGA faculty and staff have always participated in the surrounding community, Allen said, but that participation has flourished in recent years. UGA employees provide leadership on local nonprofit boards, and faculty have teamed with local government for community improvements, such as the work by Jack Crowley, a professor of environment and design, on the Downtown Athens Master Plan.

In addition, the university and the local government have partnered on several mutually beneficial initiatives, such as when the university leased land where an Athens-Clarke County fire station was built. Fire Station 7 now sits next to the new UGA Veterinary Medical Center.

While Allen has helped build the relationships, he doesn’t take credit for coming up with all of the answers.

“My job has not been to provide solutions,” he said, “but to connect people to the solutions.”