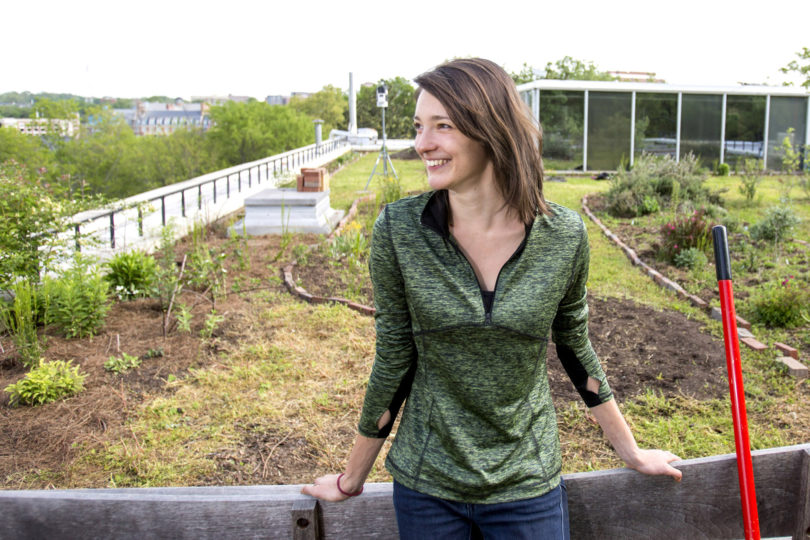 There’s something different about the geography-geology building roof.

Instead of the usual flat, gray roof, the geography-geology building is 2,200 square feet of grass, vegetables and green space. Topped with raised beds full of rich soil, plants and produce bursting with color, the Green Roof Garden is a student-run garden that started about seven years ago by a team of faculty and students known as the Athens Urban Food Collective in the geography department.

In the spring, the garden is planted with a range of crops like turnips, radishes, beets, collards, spinach and salad mixes. Carrots were a Green Roof favorite last year.

“They were gorgeous. You pulled them out of the ground, and the color was the most brilliant. It was just the brightest orange I had ever seen,” said Carson Dann, the urban agriculture intern in UGA’s Office of Sustainability who leads the Green Roof Garden initiative.

The garden has many purposes, including serving as an opportunity for students to learn about gardening. Staffed by Dann and an array of student volunteers, the garden grows kale, collards, radishes, carrots and beets. There’s a fig tree, blueberry trees, blackberries and an herb garden.

The Green Roof Garden donates its produce to Campus Kitchen at UGA, which donates it to Athens families in need, as well as the Food Bank of Northeast Georgia and other institutions working toward food insecurity. Campus Kitchen at UGA is part of the Office of Service-Learning, which is overseen jointly by the vice presidents for public service and outreach and instruction.

The garden also helps combat high temperatures and overheating. That’s a primary role of the green roof since its creation in the 1960s to support the UGA Climatology Research Lab—by providing a temperature buffer for the lab. In 2007, the lab allowed other geography faculty and students to share the space and convert some of the green roof area to a vegetable garden.

The garden helps to cool the rooftop by holding storm water, absorbing sunlight and then releasing the water vapor back to the atmosphere, creating a cooling effect similar to the human body producing sweat.

“The plants buffer the building’s temperature,” Dann said.”They insulate in the winter and cool it in the summer, reducing energy costs and unnecessary energy waste.”

Dann is a senior agriscience and environmental systems major with an emphasis in sustainable agriculture and has worked at the garden since summer 2016. She oversees the garden’s management, maintenance and volunteers and leads tours of the garden.

In late October, Dann received a grant to provide pollinator species like bees, butterflies and moths with a safe habitat at the center of the busy, commercialized city of Athens.

The project, known as RoofBuzz, was funded by the Pollination Project, a program that supports initiatives to increase sustainability and social change.

Dann used the grant money to buy plants like aster, spiked wild indigo and sage as well as mulch and mushroom compost, from the Mimsie Lanier Center for Native Plant Studies at the State Botanical Garden of Georgia, a unit of UGA Public Service and Outreach. Faculty and staff from the center helped her identify native plants that would attract native pollinators and grow successfully in the rooftop environment.

Since RoofBuzz started, the garden has attracted lots of new insects like bees, butterflies and beetles.

“It’s so encouraging to see them finding the habitat and sticking around to enjoy it. It’s working,” Dann said. “The university’s urban landscape is highly fragmented by traffic, developments, city expansion and pesticide use. As a pollinator, there aren’t many options for you. So to have a space on campus that can support these populations is truly fantastic.”

In August, Dann will write a final report to turn in to the Pollination Project about RoofBuzz, detailing pollinator numbers observed throughout the fall and spring, the health of the garden’s pollinator plants, and the various outreach and education initiatives undertaken. By then, the project will be completed and the habitat should be stable, in place and sustained.

Dann also wants to turn the Green Roof Garden into a learning environment for students and welcomes students to tour the garden. Educational tours of the space are offered to students, organizations, faculty groups and classes.

The tours discuss pollinator decline, how important pollinators are to food crops, the importance of incorporating native plants to serve as pollinator habitat and practices that anyone can employ to support their local pollinators.

“The mission is to reach a diversity of ages and backgrounds with the goal of promoting pollinator habitat, not just on a university campus, but throughout the Athens community,” Dann said.

Collette Copeland, a studio art major, has put in over 16 hours tilling soil, planting, weeding and learning about the garden and its plants.

“It really is beautiful up there,” she said. “It’s a great place to relax if you want to be alone, or just want to look at the UGA campus from another vantage point.”

To set up a tour of the garden or volunteer, contact Dann at carson.dann25@uga.edu.