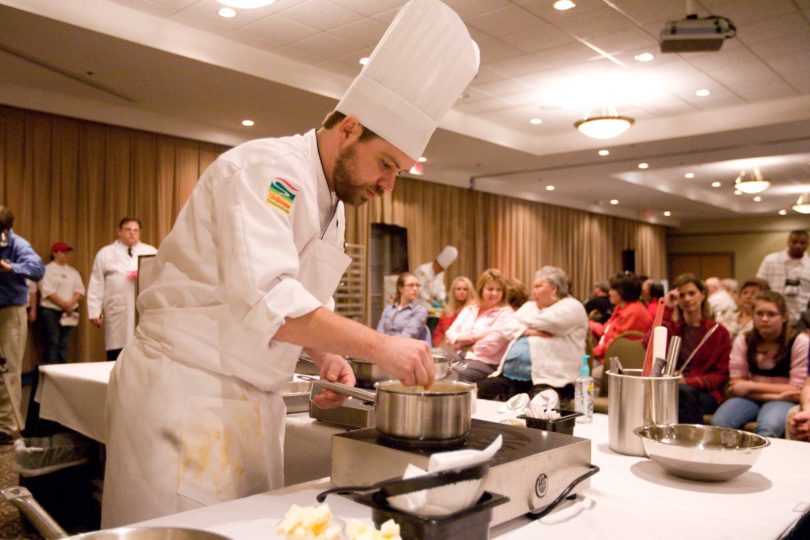 The meal must be cooked in 60 minutes. The “kitchen” is a conference room table with two induction burners and a chafing dish. A crowd of several hundred chefs and food services personnel watches the contestants every peel and sauté, and stern judges pass by every few minutes taking careful note of their food preparation-right down to the contents of their garbage bowl.

Held in Athens at the Classic Center this year, six chefs from the National Association of College and University Food Services’ southern region, which include states from New Mexico to North Carolina, brandished their knives to prepare a winning recipe with striped bass, this year’s protein choice. Recipes ranged from Marinated Rock Fish to Seared Striped Bass with Apple Buerre Blanc.

The competition was part of a conference for food services personnel, which included classes, speakers, a vendor showcase and local band performances.
On March 19, Snelling Dining Common’s cafeteria manager Bryan Varin competed against chefs from Rice University, Georgia Southern University, Emory University and Texas Tech for the top spot and a chance to advance to the national competition July 10 in Washington, D.C.

Though appearing calm and collective while dicing butter into perfect cubes and finely chopping onions into a classic brunoise cut, Varin admitted to being “a ball of nerves” while preparing his Crispy Pan-Fried Striped Bass with Callaloo, Spicy Black-Eyed Peas and Key Lime Buerre Blanc.

“The event is always stressful because you’re under the microscope,” he said.

When he went to plate his dish and pour the buerre blanc, he said his hands were shaking so much so that it looked like he was scattering-not pouring- the sauce.

A veteran of four competitions, he said it never gets any easier. “We practice these things, and it’s always different the day of the actual competition,” he said.

To prepare, Varin, who came to UGA in 2002 from the University of Washington’s food services department and graduated from the New England Culinary Institute in Montpelier, Vt., said he used spring break to practice getting his timing down and held taste testings with his Snelling Dining Commons colleagues.

Trained in classic French cuisine, Varin said the Caribbean dish was a bit of a departure from his usual recipes, but he decided to do something different and fun this time. The idea for the dish came about while creating the Caribbean style menu for the Pirates of Port dinner, the dining hall’s annual themed dinner.

The judges agreed and praised the dish for its texture and flavor. They liked that Varin constantly tasted his dish and said they enjoyed the tartness of the key lime buerre blanc balanced with the rest of the dish.

Varin also earned a silver medal from the American Culinary Federation for his dish. An award for excellence, the medal is based on the points his dish scored for flavor, sanitation, organization, creativity, cooking skills, flavor and other qualities.

In retrospect, Varin said there were a few things he would have done differently: utilized his preparation time better or chop quicker so he would have had more time for other things. But, he was happy with his dish and the way it turned out.

“Overall, it timed out perfectly,” he said. “As soon as my buzzer went off, I went to plate, which is perfect timing. It’s exactly what they’re looking for. I was proud of that.”