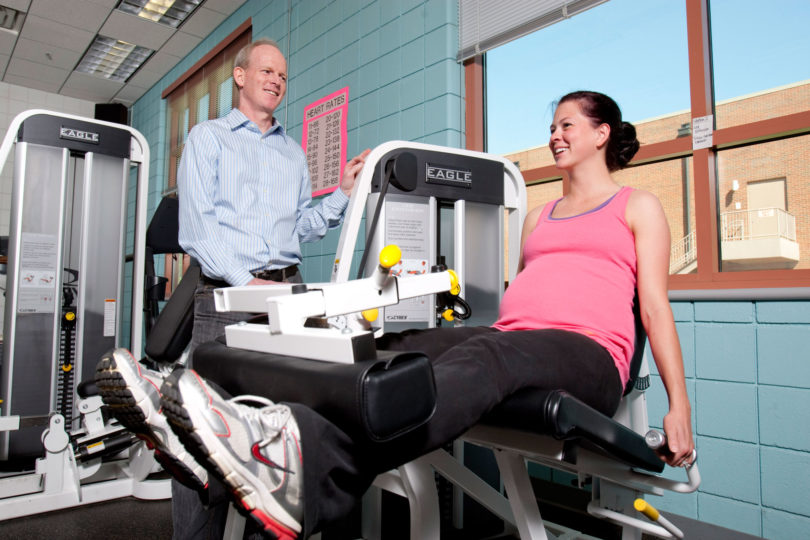 Despite decades of doctors’ reluctance to recommend weight training to pregnant women, a new UGA study has found that a supervised, low-to-moderate intensity program is safe and beneficial.

The research, published in the current edition of the Journal of Physical Activity and Health, measured progression in the amount of weight used, changes in resting blood pressure and potential adverse side effects in 32 pregnant women over a 12-week period. After a total of 618 exercise sessions, none of the pregnant women in the study experienced a musculoskeletal injury.

“Doctors often have been unwilling to prescribe weightlifting, in part, because there was little evidence that it is safe and effective,” said Patrick O’Connor, a researcher in the department of kinesiology in UGA’s College of Education. “I think that the appropriate conclusion of this study is that the adoption of a supervised, low-to-moderate intensity weight-lifting exercise program can be safe for women with a low-risk pregnancy.”

The 32 participating women did a series of six exercises twice a week that targeted muscles that play an important role in back pain and function. The group increased the amount of weight lifted in all of the exercises by an average of 36 percent over the 12-week period.

“The data shows women can increase their strength even though they are pregnant and have never done weight training before,” O’Connor said. “And their body is changing over the 12-week period as the baby grows.”

One reason physicians have been reluctant to prescribe weight lifting to pregnant women is that they produce high amounts of a hormone called relaxin, which makes connective tissue become more lax so that the body is ready to give birth, according to O’Connor. Increased laxity could be associated with orthopedic injury. The research focused on low-to-moderate exercise so as to avoid injury associated with increased relaxin in the body.

Thirteen incidents of potentially problematic symptoms were reported after the 618 workout sessions, all of which involved headache, pelvic pain and dizziness. Some pelvic pain can be expected in pregnant women with back pain, according to O’Connor.

“The one thing you have to be a little careful about is dizziness,” he said. Rates of dizziness went down after the first few workouts, as the women learned to lift weights while maintaining proper breathing techniques for exercise.

The researchers also monitored blood pressure over the course of the study.

People often experience a small reduction in blood pressure immediately after a workout, but the researchers found no change in the 32 pregnant women after each individual session or after the entire 12-week program.

“So the weight-training program was neither good nor bad for blood pressure,” he said.

O’Connor collaborated with Melanie Poudevigne, now the director of health and fitness management in the department of natural sciences at Clayton State University. O’Connor said that the research could not have been completed without the support of forward-thinking physicians. The researchers worked in conjunction with obstetricians and midwives in Athens.

O’Connor next plan is to study whether the weight-training program can help reduce back pain in pregnant women.