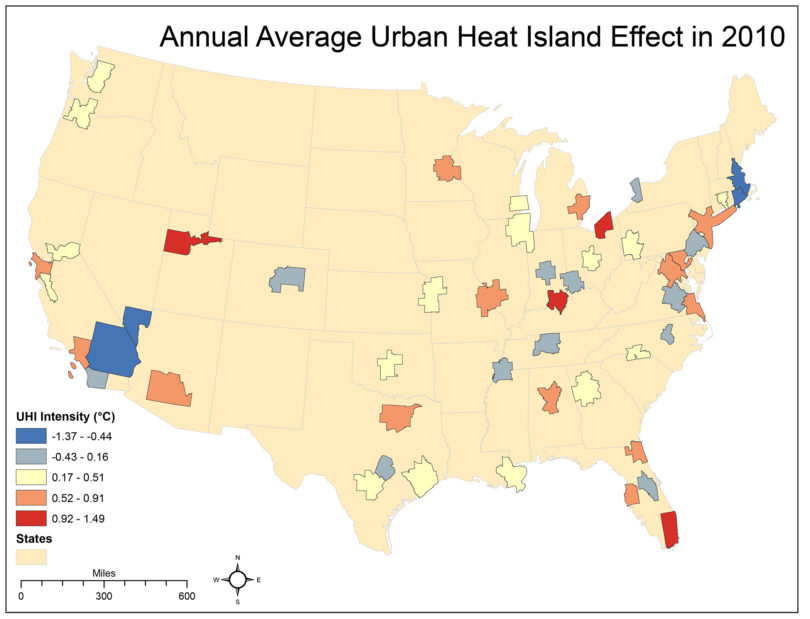 Athens, Ga. – Inner cities as well as suburbs show distinctly warmer temperatures—known as the urban heat island effect—than rural areas as a result of land use and human activities, which can affect rainfall, air quality and public health.

A University of Georgia study using a new method for calculating urban heat island intensities clarifies the conflict on whether urban density or sprawl amplify these effects more. It also provides a ranking of the top urban heat island cities among the 50 largest metropolitan statistical areas.

The urban heat island effect describes how the spatial configuration of cities, the materials in them (such as asphalt), lack of vegetation and waste heat can modify temperature.

The study, published in the journal Computers, Environment and Urban Systems, identifies Salt Lake City, Miami and Louisville as the top three urban heat island cities in the U.S.

Urban morphology—the patterns of a city’s physical configuration and the process of its development—has long been associated with the formation of urban heat islands. By examining the UHI intensities of 50 cities with various urban morphologies, the researchers evaluated the degree to which city configuration influences the UHI effect.

“The overall goal of our study was to clarify which urban form—sprawl or more-dense development—is most appropriate for UHI mitigation,” said the study’s lead author Neil Debbage, doctoral student in the Franklin College of Arts and Sciences’ department of geography.

The use of spatially gridded temperature data, rather than urban versus rural point comparisons, represents a new method for calculating a city’s canopy heat island intensity. The results identify the spatial contiguity of developed areas as a significant factor influencing the magnitude of the heat island effect.

“Not just whether cities have high-density development, but how the built infrastructure is connected—and disconnected by green spaces—has a great impact on heat island intensity,” said study co-author Marshall Shepherd, the UGA Athletic Association Distinguished Professor of Geography and Atmospheric Sciences.

“We found that more contiguous sprawling and dense urban development both enhanced UHI intensities. In other words, it does not appear to be a simplistic either-or situation regarding sprawl or density,” Debbage said.

The researchers hope the results can help influence local governments and city planners in the formulation of effective codes and policies to mitigate the urban heat island effect.

“It’s crucial to work toward a better understanding of the complex processes at the intersection of urbanization, climate and human health,” Shepherd said. “Current and future cities will be modified or designed with weather and climate in mind, and research at UGA will play a key role.

The study on “The Urban Heat Island Effect and City Contiguity” is available at www.sciencedirect.com/science/article/pii/S0198971515300089.