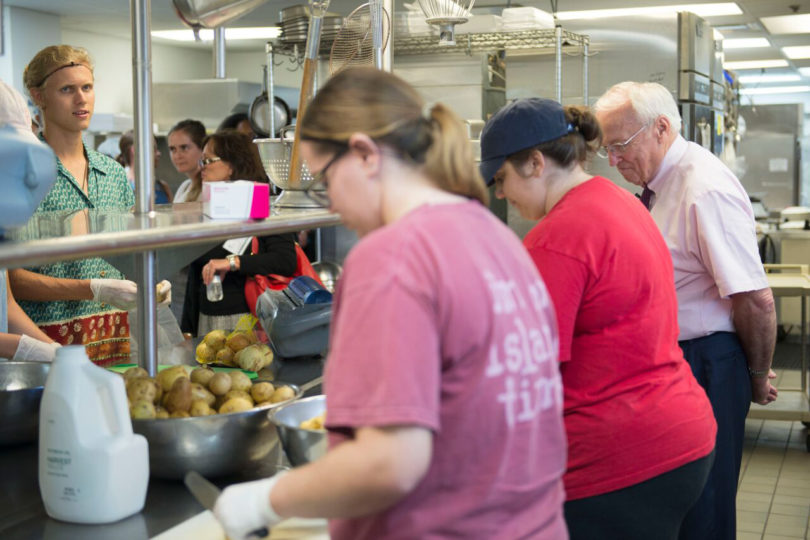 Athens, Ga. – About 1.8 million Georgians depend on government assistance to feed their families. On Wednesday, the U.S. Department of Agriculture undersecretary for food, nutrition and consumer services visited Athens to see how the university is working within the community to make it easier for those families to eat healthier.

Kevin Concannon, who has been undersecretary since 2009, toured the student-run UGArden, ate lunch prepared by students at Clarke Middle School, and got an inside look at Campus Kitchen, a student-run program within the Office of Service-Learning, a UGA Public Service and Outreach unit, that recovers food from local businesses and gardens and prepares meals for needy people in the Athens area.

“It’s wonderful to see the reach of the university in a variety of community-based settings,” Concannon said, following his visit to Talmage Terrace retirement community, where UGA students in Campus Kitchen prepare meals to deliver to grandparents raising grandchildren, a population identified as a high priority need by the Athens Community Council on Aging. Because many grandparents don’t have legal custody of the grandchildren who live with them, they can’t qualify for federal assistance for them.

Since 2008, the number of SNAP-authorized farmers, roadside farm stands and farmers markets that accept SNAP has increased from 735 to more than 6,500, making healthy food more accessible to low-income families.

But Concannon emphasized that efforts like those at UGA are critical to meet the needs of people who are food insecure.

“That’s where farmers markets and people working on farm-to-schools come in,” Concannon said.

The UGArden sells its produce to the public on Thursdays. But it donates 60 percent of what it grows to Campus Kitchen, said Aidan Holley, who interns with both the garden and Campus Kitchen. The students also offer cooking demonstrations and provide recipes with the produce delivered to area families.

Wick Prichard, an Americorps VISTA volunteer working for the Office of Service-Learning, oversees the garden and culinary program at Clarke Middle School. Students at CMS plant, maintain and harvest the food and prepare it to serve to people in the Athens community. Local chefs teach them new recipes.

On Wednesday, the students, in hairnets and red aprons with the CMS owl mascot on the front, served cups of gazpacho, pulled pork sandwiches, vegetables and peach cobbler to Concannon and others from UGA and area nonprofit organizations.

The programs helps grow gardeners and people who appreciate food and its origins, Prichard said.

The farm-to-school concept is one that Concannon also promotes. Teaching children healthy habits will lead them to be healthy adults, he said.

“These are values the students will take with them for a lifetime.”

Learn more about programs within the Office of Service-Learning at service-learning.uga.edu.

Learn more about SNAP at www.fns.usda.gov.