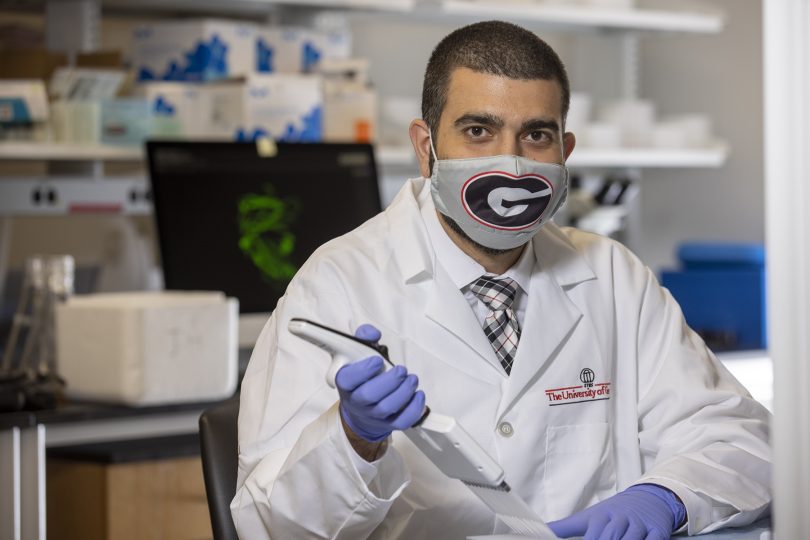 Jarrod Mousa works in his lab.

The work performed in Jarrod Mousa’s lab might sound like magic at first, but most great science does. Vaccines, a hot topic in today’s world, are still very much an arcane field of study. Through various methods, scientists develop new vaccine candidates and therapies designed to prevent and treat infectious diseases. In Jarrod Mousa’s lab, the method of choice is based on monoclonal antibodies—proteins produced by our own immune systems. 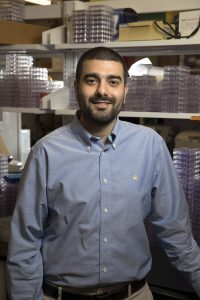 Jarrod Mousa is an assistant professor in the College of Veterinary Medicine. (Photo by Dorothy Kozlowski/UGA)

When Mousa, an assistant professor in the UGA College of Veterinary Medicine, began his undergraduate studies at the University of North Florida, his initial goal was to become a physician. That changed when he started conducting research, and he dove into chemistry. “I was interested in synthetic chemistry and how to better synthesize drugs on the market today, which is a big challenge right now,” Mousa said. The basis of synthetic chemistry is the development of special molecules—built and designed in a lab to accomplish a specific task in the body.

However, early in his graduate studies at the University of Florida in the lab of Steven Bruner, Mousa realized bacteria and fungi are better chemists than humans.

“I really started to look into protein structures. Many antibiotics come from fungi and bacteria. They aren’t synthesized—they’re discovered,” Mousa explained. “When just focusing on lab-made drug molecules, you don’t get to see how these bacteria interact and fight one another.”

In other words, there are opportunities to discover new drugs by studying how these pathogens defend themselves.

Mousa fully made the jump to the study of vaccines and monoclonal antibody therapies during his postdoctoral training in the lab of Dr. James E. Crowe at Vanderbilt University. The Crowe lab is known for its work in vaccines and antibody therapies. And where Mousa’s previous experience had largely focused on drug molecules, this training brought him into contact with his own lab’s focus today—monoclonal antibodies.

“Just as bacteria make molecules to defend themselves, the immune system makes antibody proteins for the same purpose,” Mousa said. And as the molecules in fungi and bacteria are used in antibiotics, antibodies form the basis of the drugs developed in Mousa’s lab.

“Antibodies are large proteins that your immune system makes to defend itself. And a major advantage is how specific they can be,” Mousa said. “Where some drugs can have some side effects, antibodies often have a specific target. We mostly study antibodies derived from humans, so any off-target effects are minimal.” Their specificity also limits the number of off-target effects that can plague synthetic drugs and cause unwanted side effects.

There are a few guiding questions researchers turn to in this work: What are the regions that antibodies bind in order to neutralize a pathogen? Can we use that information to develop vaccines, and can those antibodies be used as therapies? Incorporating his prior studies, Mousa’s lab uses protein structure techniques to help answer these questions.

Today, Mousa’s lab predominantly focuses on vaccine and therapy development for respiratory viruses, such as influenza and human metapneumovirus—a virus with no current vaccines or therapies. But the lab occasionally works with bacteria. In fact, the lab recently released findings on a new monoclonal antibody effective in preventing and combating Streptococcus pneumoniae, a major cause of pneumonia.

Mousa said advancing new discoveries into the clinic is a major goal for his lab. The other is mentoring and training the next generation of scientists.

With eight trainees in total ranging from postdoctoral to undergraduate studies, Mousa’s lab provides a great stepping stone for them as they build their own careers.

“I enjoy seeing students making new discoveries and seeing their research end up in scientific publications,” Mousa said. “With help from the UGA PREP program, we’ve seen students come with little research experience who are accepted into graduate school during their time in the lab.”

Mousa also teaches several classes at the College of Veterinary Medicine including the T-Cell and B-Cell sections of Introduction to Immunology for undergraduate and graduate students as well as a graduate-level course in structural immunology.