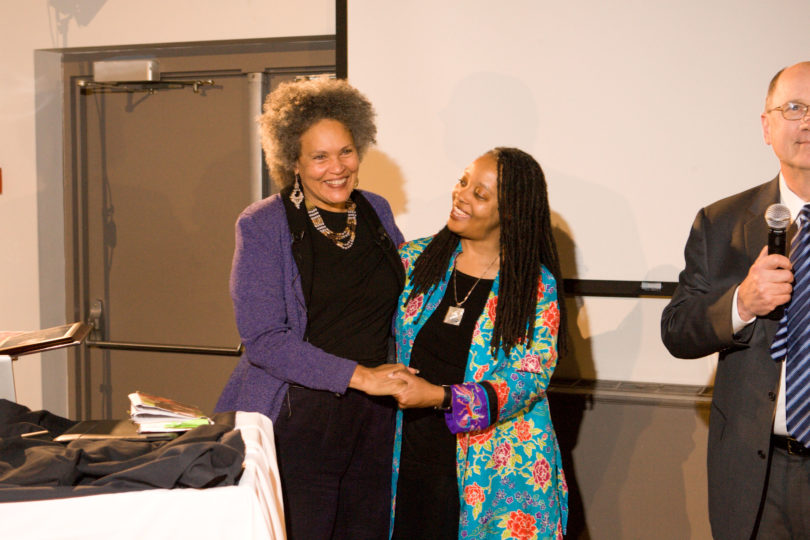 Valerie Boyd, associate professor of journalism, grew up in Atlanta, where the names Hamilton Holmes and Charlayne Hunter-Gault, the first black students to attend UGA, were always in the air.

Hunter-Gault, who went on to be a newspaper, television and radio journalist, was also a childhood inspiration for Boyd.

“She’s one of the reasons I became a journalist,” Boyd said. “As a black child growing up in Atlanta in the ’70s, there were few role models as journalists, and Charlayne was one of them.”

Since 2007, Boyd has been the Charlayne Hunter-Gault Distinguished Writer-in-Residence in the Grady College of Journalism and Mass Communication, the school Hunter-Gault graduated from in 1963-the same year Boyd was born.

“It’s amazing to hold a titled [position] named after Charlayne Hunter-Gault both because of the contributions she’s made to American culture and because of that childhood admiration I had for her,” Boyd said.

Boyd spent many years at the Atlanta Journal-Constitution before transitioning to teaching after publishing her first book. Boyd writes books about black women’s lives.

“I’m really interested in telling history through the lives of individuals,” she said.

She’s written a biography, Wrapped in Rainbows, about Pulitzer Prize-winning author Zora Neale Hurston, and is finishing a book about black women in Hollywood.

The only African-American faculty member in Grady College, Boyd said she hopes to expand Hunter-Gault’s legacy of inclusiveness.

“I hope my presence here can make people feel like this can be their place too and that the university is a welcoming place for all kinds of people,” she said.

The nation, according to Boyd, has changed a lot in the half century since the race riots, court orders and police presence that accompanied Holmes and Hunter-Gault’s first days on campus. “People didn’t want to sit next to [Charlayne] in class. That’s ridiculous racism,” she said. “We don’t see that kind of blatant racism expressed anymore as a common practice. “

She also said that students of this generation have different racial attitudes and few likely have experienced blatant racism.

“Having President Barrack Obama in office makes a difference in term of racial perception,” she said. “I don’t think our nation is post racial. Race is still a factor. It’s good if we can talk about it openly, and we’re still struggling to do that as a country.”