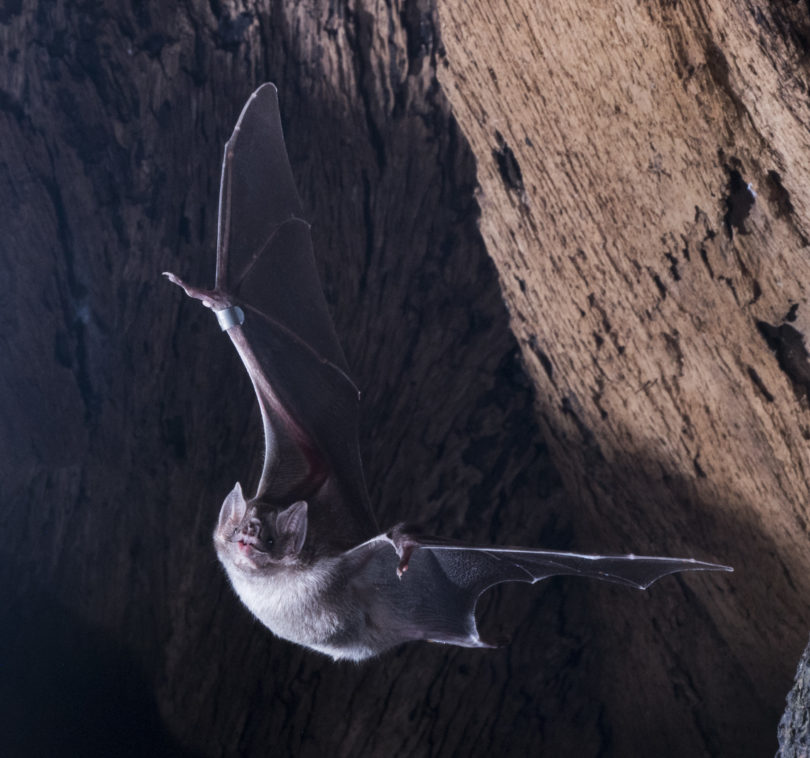 Vampire bats captured for the study were tagged and released back into the wild after the researchers collected hair and blood samples and recorded age, sex and reproductive state. (Credit: Brock Fenton)

The availability of livestock as a food source for vampire bats influences their immune response and infection by bacterial pathogens, according to a new paper in Philosophical Transactions of the Royal Society B. Because cattle ranching is common in areas where the bats live, the findings have implications for human as well as animal health.

The study explores how the availability of livestock as a food source influences bat immunity, infection risk and reproduction, from microscopic to landscape scales. It was led by University of Georgia Odum School of Ecology doctoral student Daniel Becker and co-authored by an international team of researchers, including Odum School faculty Sonia Altizer and Daniel Streicker. The paper is part of a special theme issue, edited by Becker, Altizer and colleagues, about the complex ways that human-provided food alters infectious diseases in wildlife.

“In this study we examined several ways that food provided by people would affect infection in vampire bats,” said Becker, who is now a postdoctoral researcher at Montana State University. “If we want to understand how supplemental feeding or land use changes affect disease risk, it’s important to quantify different processes like population size, immunity and feeding behavior.” 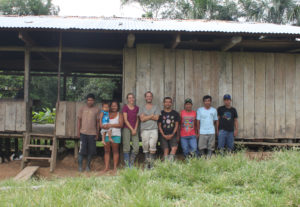 Daniel Becker (fifth from right), co-author Jorge Carrera (fourth from right) and members of the field team pose with a local family of cattle owners who allowed the researchers to collect bats at their property in the Peruvian Amazon. (Credit: Katherine Ineson)

Whether intentional—as with backyard bird feeders—or inadvertent—as when agriculture moves into areas where wildlife live—access to human-provided sources of food can affect both wildlife and public health.

In some cases, easy access to plentiful food means wildlife benefit from improved nutrition and reduced stress, allowing them to better fight off infection. In other cases, infection rates can rise, such as when supplemental food increases wildlife reproduction rates; the resulting larger population sizes can help some diseases to spread. Easily accessible food sources can also bring together animal species that would not otherwise interact, allowing pathogens to cross over from one species to another—including to humans.

Earlier work on this topic by Becker and UGA ecologist Richard Hall used computer simulation models to show that pathogen spread depended strongly on how supplemental feeding influenced host immunity. In the new research, Becker and his co-authors explored this idea in a real-world animal system. They conducted a four-year field study of vampire bat colonies in Peru and Belize at sites ranging from relatively undisturbed forest, with little animal prey for vampire bats, to high-intensity cattle ranching that provided ample vampire bat food.

They looked at whether immune response differed because of the availability of livestock as a food source, and whether these changes predicted infection risk by two kinds of bacteria common in bats, Bartonella and hemoplasmas.

Becker and his colleagues collected hair and blood samples from hundreds of bats and recorded each bat’s age, sex and reproductive state, tagging each one with a unique identifier before releasing it back into the wild.

Stable isotope analysis of the bat hair samples showed that bats in all areas fed on livestock—even in heavily forested habitat where a few subsistence farmers might be raising just a pig or some chickens, Becker said. “They’re going to seek them out because it’s just such an easy food source,” he said.

But livestock abundance was associated with significant differences in bat reproduction, immunity and rates of infection.

Areas with more livestock had more reproductive bats and more male bats. Previous studies have shown that more male bats are born when maternal condition is good—which might be expected where there is plenty of food available—and because male bats from other areas may immigrate to such locations.

Bats from areas with more livestock also had lower rates of pathogen infection, especially in the case of Bartonella, which is likely transmitted by insects like bat flies or fleas.

“You might not expect transmission of an insect-transmitted pathogen to be affected by provisioning, because it’s not really clear how having more food would influence bat-fly-bat contact,” said Becker. “So in that case, if bats are better able to clear infection, this could explain why bats in livestock-dense areas have lower infection risk.”

Because hemoplasmas are thought to be directly transmitted from bat to bat, denser colonies—a result of increased immigration and reproduction in areas with more livestock—could raise contact rates enough to partially overcome bats’ enhanced innate immunity, he said.

The results of the study have implications for animal and human health. Because adaptive immunity can play a greater role than innate immunity in fighting viruses, bats in high-livestock areas might be more susceptible to viruses like rabies and influenza that can be transmitted to domesticated animals and humans. And activities that bring bats into proximity with livestock and people increase the risk of cross-species transmission of pathogens.

Becker said that it was important to note that his team’s data suggests that there’s a difference between subsistence farming and large-scale cattle ranching.

“We’re definitely not trying to suggest that people in these regions should get rid of all their chickens, or small numbers of other livestock,” he said. “It’s when you start clearing vast tracts of forest that’s probably a big driver of what’s going on here, because then you’re depleting the bats’ natural food and replacing it with this new food source, and that’s having all these individual and population level consequences for the bats.”

Besides Becker, Altizer and Streicker, who is also on the faculty of the University of Glasgow, the study’s other co-authors are Gábor Czirják of the Leibniz Institute for Zoo and Wildlife Research; Dmitriy Volokhov and Vladimir Chizhikov of the U.S. Food and Drug Administration; Alexandra Bentz and Kristen Navara of the UGA department of poultry science; Jorge Carrera of the Universidad Nacional de Piura; Melinda Camus of the UGA College of Veterinary Medicine; Brock Fenton of the University of Western Ontario; Nancy Simmons of the American Museum of Natural History; Sergio Recuenco of the Universidad Nacional Mayor de San Marcos; and Amy Gilbert of the U.S. Department of Agriculture Animal and Plant Health Inspection Service Wildlife Services.