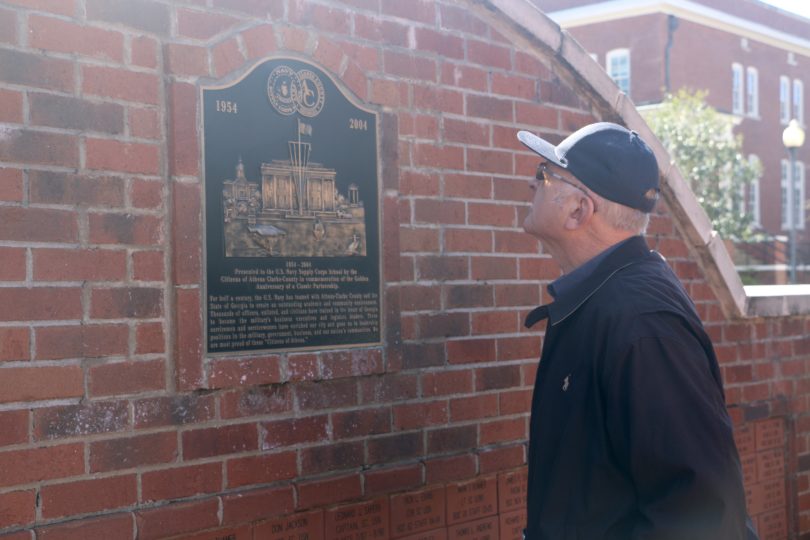 Steve Kassay inspects a plaque on the Health Sciences Campus that was donated to the Navy Supply Corps School — where he served — on its 50th year in Athens.

Steve Kassay donated some of his Navy items to the university

As Steve Kassay walks around the University of Georgia Health Sciences Campus, hand-in-hand with his wife, Nancy, he points out places that spark memories. Kassay has returned to the campus he called home for six months when the grounds of the Health Sciences Campus were used as the Navy Supply Corps School for the U.S. Navy. 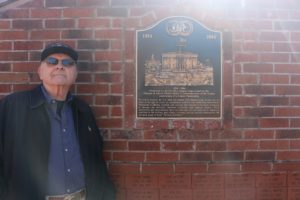 The Navy Supply Corps was at this location on Prince Avenue from 1953–2010. During this time, all active-duty supply corps officers in the U.S. Navy were trained in Athens. Following its closing in 2010, the Navy transferred the property to the U.S. Department of Education who then deeded the property to UGA. The campus now houses the Augusta University/University of Georgia Medical Partnership and the UGA College of Public Health.

Kassay suffers from the early stages of dementia, but remembers the mornings spent in Royar Square in front of Winnie Davis Hall with amazing accuracy.

“This is where we would line up in the mornings,” Kassay said. “If we weren’t dressed just right, we would get demerits.” 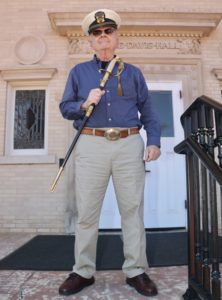 Kassay was born on March 12, 1942, in Cleveland, Ohio. He graduated from Purdue University in 1964, followed by graduate school at Tulane University. After one year at Tulane, he decided to leave the university and started thinking about a different future.

“I looked at the draft board and realized my chances of being drafted were very high,” he said. “That’s what led me to join the Navy.”

Kassay settled on the Navy through the process of elimination. “I’m flatfooted, so the Army wouldn’t take me, and the Air Force wanted you in for five years, so I worked my way to the Navy and met with a recruiter so they could take a look at me,” Kassay said. “And that’s how I ended up in the Navy.”

In June 1965, he started Officer Candidate School in Rhode Island. Kassay said OCS was more about breaking you down mentally than physically. “They would tell us to do these impossible things like read 900 pages in a book each night,” said Kassay. “Others were going crazy trying to do these things, and I told them to sit back and relax, because it was impossible.”

“Kassay doesn’t like rules,” said Nancy, who said he found his way around a few things. “He couldn’t make a bed to save his life,” she said, “so he traded off with his roommate. The roommate would make the bed, and Kassay would help with academics.”

He left OCS in September 1965 and got word he would be coming to Athens to go through Navy Supply School. 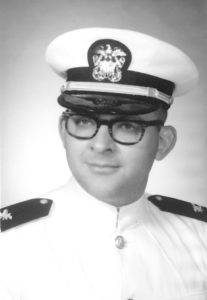 “Up until then I didn’t know where the South was,” Kassay said. “My family didn’t travel, so my whole world was within 100 miles of Cleveland.”

He arrived in Athens in October 1965 after driving the whole way from Ohio. “It was like going to school,” Kassay said of his time here.

The Kassays are pretty certain that Kassay lived in what is now Miller Hall that currently houses UGA College of Public Health faculty.

Following his training at the Navy Supply Corps School, Kassay left Athens in March 1966 for San Diego where he worked on the USS Nereus, a submarine tender. As a supply officer on board, Kassay made sure submarines were stocked and supplied properly. During his time in San Diego, Kassay was promoted to lieutenant junior grade before working his way to lieutenant.

In August 1968, Kassay was released from active duty and became listed as a reserve officer.

Nancy and Kassay met in Santa Monica, California, in August 1971. At the time, he was selling medical insurance with New York Life and made a personal sales call to her office. They later married in Las Vegas, Nevada, on Dec. 21, 1972. 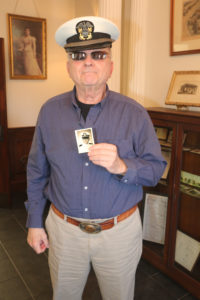 In June of 1974, Kassay was granted honorable discharge from the Navy. Following this, Kassay spent the majority of his career in the computer software business and also taught math for 12 years.

Kassay and Nancy decided to move to Athens from Los Angeles in 2003 after they had both retired. Nancy still has family in South Georgia, and the two also wanted the atmosphere of a college town.

In fall 2018, the Kassays made a trip to the AU/UGA Medical Partnership to donate some of Kassay’s old Navy items—his sword (engraved with his name), his hat and insignias. The Kassays do not have children and wanted the memorabilia to go to a special place.

“We didn’t want to give the items to someone they don’t mean anything to,” said Nancy.

“That sword is significant,” said Kassay’s caregiver Kaitlyn Quinn. “It represents an accomplishment during a time in his life, and he wanted it to be taken care of.”

When Kassay and Nancy were invited back to the medical partnership to tour the campus and give an interview, Nancy said Kassay was giddy with excitement. “This is all he’s been talking about” she said. “I’ve heard about it every single day.”

Staff members at the medical partnership are going through ways to properly display Kassay’s Navy belongings with the honor that they deserve.

As for Kassay, he feels glad that his Navy items have returned to their home. “It’s a great place for them to be,” he said. “I’m thrilled they’re back.”