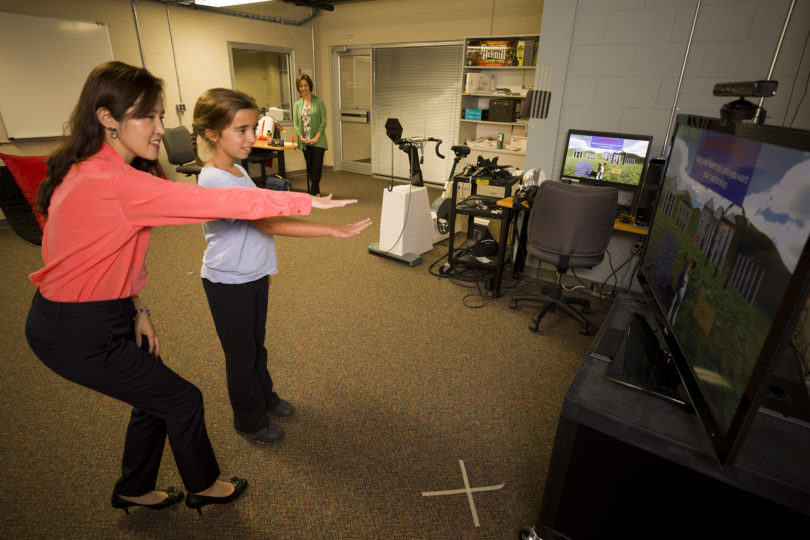 Associate Professor Dr. Sun Joo (Grace) Ahn, left, helps nine year old Maddie Lacey of Watkinsville with interacting with the virtual buddy fitness kiosk in the GAVEL Lab at the Grady College of Journalism. (Andrew Davis Tucker, University of Georgia) Photographic Services File: 35137-028 The University of Georgia owns the rights to this image or has permission to redistribute this image. Permission to use this image is granted for internal UGA publications and promotions and for a one-time use for news purposes. Separate permission and payment of a fee is required to use any image for any other purpose, including but not limited to, commercial, advertising or illustrative purposes. Unauthorized use of any of these copyrighted photographs is unlawful and may subject the user to civil and criminal penalties. Possession of this image signifies agreement to all the terms described above.

University of Georgia researchers have been awarded a $3.3 million grant from the National Science Foundation to use virtual reality to help children develop a more active lifestyle.

The Virtual Fitness Buddy Ecosystem: Using Digital Technology to Promote and Sustain Moderate to Vigorous Intensive Physical Activity in Children will fund a five-year program through the after-school program sponsored by the Metro Atlanta YMCA. Children ages 6 to 10 years old will participate with their parents in the program.

“With this grant, we will try to encourage kids to exercise more, learn how to communicate with their parents regarding the exercise, and maintain and sustain a level of physical activity that they experience after school,” said Sun Joo “Grace” Ahn, associate professor of advertising in UGA’s Grady College of Journalism and Mass Communication and principal investigator for the study.

Each child participating in the study will wear a personal fitness tracker, like a Fitbit, and set personal physical fitness goals.

One of the keys to the program will be social support from the parents. Every time the child participates in physical activity, a virtual buddy kiosk will send a text message to the parents notifying them of the activity, even when they are not with the children. They can, in turn, send a message back to the child encouraging them and motivating them to maintain the activity. Parents can also closely monitor the child’s physical activity progress over time through a password-protected website specially created for the project.

Ahn says a lot of parents want to be involved with their child’s activity level and have good intentions of doing so, but don’t have the resources available to them while they work.

Ahn predicts that by harnessing the power of technology to connect people and devices, physical activity among children will increase and will be maintained over extended periods of time.

“Dr. Ahn’s work explores issues critical to the health and vitality of American children, using the very latest in digital technology,” said Charles N. Davis, dean of Grady College. “Her research really represents Grady’s depth in emerging media technologies that can be used to address so many different issues of vital importance to citizens.”

Several successful pilot studies have already been conducted over a three-day time period to test the feasibility of bringing virtual reality to children of this age group. This grant allows the study to become much larger and increase the trial period to three months and include 720 children and their parents.

“With an innovative and multidisciplinary approach, Dr. Ahn and her colleagues are working to help young people lead healthier and more active lives,” said Senior Vice President for Academic Affairs and Provost Pamela Whitten. “They exemplify how the breadth of the expertise at the University of Georgia makes this institution uniquely positioned to address some of the most important challenges facing our state and world.”

When the study is complete, a three-month, six-month and 12-month follow-up will be conducted to see if the physical activity levels were sustained. Self-reports of data evaluating the continued interaction between the parents and children will be recorded, along with physical activity levels as read by the personal fitness trackers. Results will be compared with a control group that will have the physical fitness trackers, but not the virtual buddy kiosk nor the parental interaction.

In addition to the benefits of increased physical activity among children and increased involvement with the parents, Ahn said the program has the potential to reduce labor costs with traditional methods of hiring and training personnel who work as physical coaches.