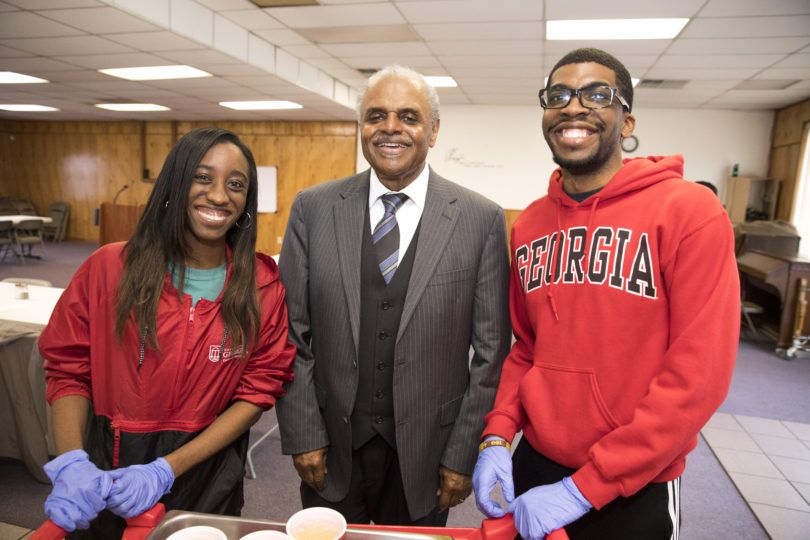 The Rev. Winfred Hope’s work in the church and community focuses on enriching the lives of young people. Shown with Hope are Ashley Austin, left, a pharmacy student from Dublin, and Timothy Pritchett, right, an early childhood education student from Hampton.

With a last name like his, the Rev. Winfred Hope strives to instill hope, dedication and hard work into the Athens community by investing in young people’s success.

Hope has pastored at Ebenezer Baptist Church West in Athens for nearly 40 years and has turned the church into a sanctuary for its members and those in need.

Born in Mobile, Alabama, he is one of 11 children, and his father and brother were ministers as well. He received his bachelor’s degree in sociology from Fort Valley State College, a Master of Divinity from the Morehouse School of Religion and a Doctor of Ministry from San Francisco Theological Seminary.

In January, he received the 2018 President’s Fulfilling the Dream Award at the Martin Luther King Jr. Freedom Breakfast. His work within the church and the community focuses on enriching the lives of young people, much like King’s vision of equality, justice and human rights.

Hope has felt a deep connection to King for quite some time. His first-born daughter was born April 4, 1968, the night that King was shot in Memphis, Tennessee, and photos of King and Barack Obama hang on the wall across from his desk at the church.

His first pastoral opportunity was at Mt. Calvary Baptist Church in the small Georgia town of Cairo, where he pastored for seven years while studying at Morehouse and working with the Georgia Mental Health Institute in Atlanta. He and his wife, Betty, a former school teacher in Fulton County at that time, shared a car, and he sometimes fought his way through Atlanta traffic on a bicycle.

Hope also served on the Clarke County Board of Education for two years where he reviewed student achievements, unexcused absences and grades and encouraged students who weren’t living up to their full potential.

Hope helps students reach their goals by matching them with internships and summer jobs, writing school references and admission letters and running a Foster Student/Parent Program that matches students with church members who can help them on the road to success.

Hope’s sermons are laced with funny stories and visual elements that appeal to all members of his congregation, like an interactive activity that teaches young people to focus on the goals they set for themselves using only himself, a plate of Ritz crackers and a few dollar bills.

“I am the prize. Keep your eyes on the prize,” Hope told the congregation as he ran up and down the sanctuary’s aisles. He dropped coins on the floor, causing some of the adolescents to stop watching him and pick them up. Some were so preoccupied that they didn’t notice when he started to drop dollar bills instead.

“You could’ve had everything I have because I’m the prize,” Hope told them as he returned to the pulpit. “You stopped to get something of less value.”

He said they understood that message.

Hope also does outreach within the Athens community and collaborated with another local church and Habitat for Humanity to build three homes for local families. The Ebenezer family found land for one of the houses and sent volunteers with handiwork and carpentry skills to help build the houses.

Hope’s work extends much farther than Athens, and in 2014, Ebenezer sent its first large group of volunteers to Kisii, Kenya. Sixteen church members went on the trip where they partnered with the St. Carl Home of the Champions School and Orphanage.

Their mission work since 2014 allowed them to add windows, doors, bunk beds, blankets, mosquito nets to the orphanage; buy uniforms and shoes for the children; and provide them with toothbrushes, toothpaste, medicines, hygiene kits for the teen girls and other essential toiletry items.

Hope and his church members also served ice cream cups to the children, some of whom had never had ice cream before. He saw hope in the children he met there, and it’s an experience he will never forget.

Ebenezer sends a financial donation to St. Carl Orphanage every month to buy food, and they are planning a third trip to Kenya in September. Hope plans to go.

More than anything else, he loves to help others.

“I try to live up to my name because for a number of people, at every age, hope is about all they have left,” he said. “Nothing is hopeless, just believe.”