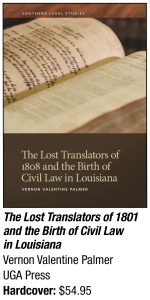 In 1808, the Louisiana territory legislature appointed two men to translate the “Digest of the Laws in Force in the Territory of Orleans” from French into English. However, those officials didn’t disclose who received the commission, and the translators never identified themselves. In fact, the “translators of 1808” protected their secret so well that their identities remained unknown for more than 200 years. Everything about them—their names, personalities, careers and credentials—have been a missing chapter in Louisiana legal history.

In The Lost Translators of 1801 and the Birth of Civil Law in Louisiana, Vernon Valentine Palmer, through meticulous research, uncovers the identity of the translators. He presents their life stories and examines their translation in the context of the birth of Louisiana civil law. One consequence of the translators’ previous anonymity was that the translation itself hasn’t been completely examined before this study.

Although the translation has its criticisms—including specific errors that have been pointed out—but Palmer’s study is the first general evaluation that contemplates the translation’s goals, the Louisiana context, its merits and demerits, its innovations, failures and successes. It allows readers to comprehend how much and in what ways the translators influenced the future of Louisiana law.