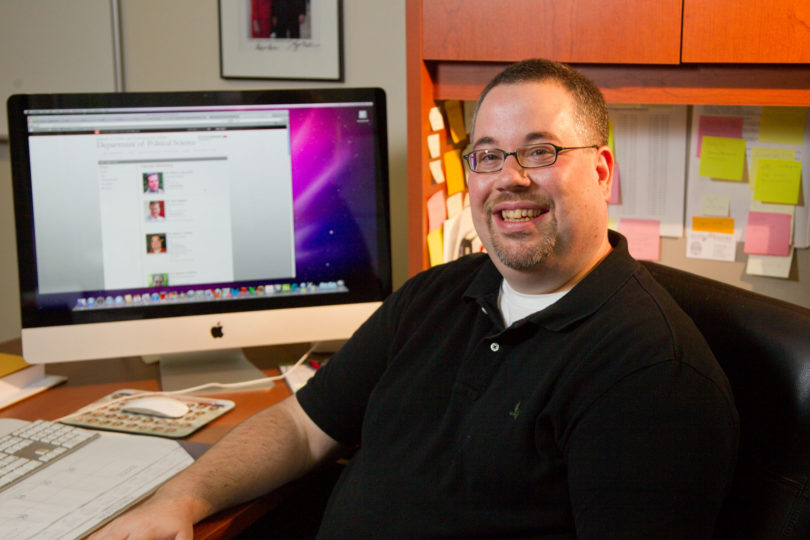 Jamie Carson just might be the man of the year.

That’s because his research and teaching focus, U.S. elections, is sure to command wide-ranging interest throughout the year.

In the classroom, Carson, an associate professor of political science, teaches the history and theory of American elections—oftentimes to students who will vote for the first time.

He’s spent the last 10 years researching the forthcoming Ambition, Competition and Electoral Reform: The Politics of Congressional Elections Across Time, the first analysis of U.S. congressional elections before 1946.

The manuscript, co-authored by Jason Matthew Roberts at the University of North Carolina at Chapel Hill, sheds new light on modern politics by exposing previously unseen trends in American voting.

“The argument’s always been, ‘Well, this is how elections work in the modern era. They’re going to be very different than in the past,’ ” Carson said. “But I re-analyzed elections in this earlier period and found similarities even though there were different circumstances—party machines used to be more prevalent, and this was before the secret ballot—but we still saw a lot of the same outcomes. There weren’t nearly as many differences as we were led to believe, but more importantly, because the electoral system was so different, we can actually get at some interesting modern puzzles.”

Before World War II, politicians operated in a different environment, without the modern media or large, professionalized staffs. Yet American voters behaved much like they do today, re-electing incumbents and supporting pork barrel legislation in their districts.

“We can look at things like the incumbency advantage. Incumbents have larger staffs, they have their accomplishments to run on, they have greater money… but a lot of these are modern things,” Carson said.  “One of the things my co-author and I do in the book is look at an earlier time, when incumbents didn’t have all the advantages they have today. If they’re just as likely to win back then, that tells us it’s not these perks of office as much as it is who their opponent is. And challengers, like today, were risk-averse.”

That kind of enthusiasm and his linking-past-to-present approach ignites a fire in Carson’s students, if professorial ratings are any indication.

Carson’s  teaching focus changes with the election cycle. This fall, as Americans line up at the ballot box, he’ll be teaching an Honors course on that very topic.

“It’s one of my favorite classes to teach,” he said. “The students are highly motivated and they get very excited. So we go over these ideas, why do incumbents do better, how much does money really influence outcomes? Then we watch the elections; and afterward they write a paper that says, Given what happened, how well do these theories explain it?’ ”