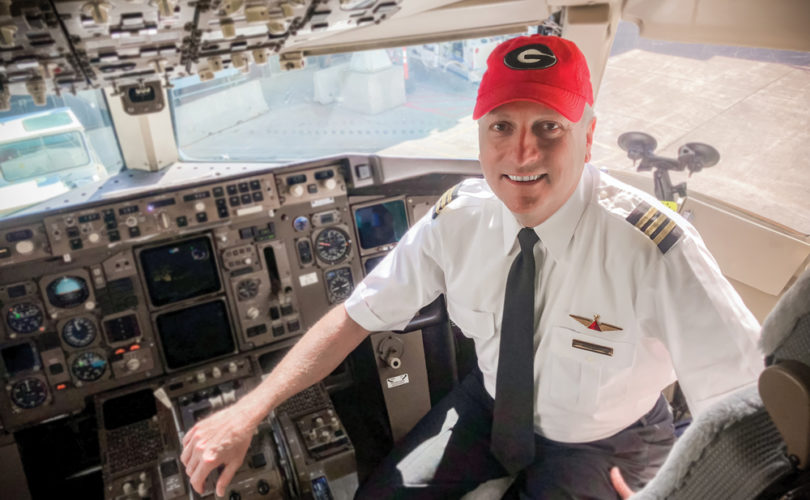 Walter Sams BS '84 has been pilot with Delta Air Lines for 14 years. He also serves as a major general in the Air Force Reserve. (Photo/Special)

In the end, it only took one day for Walter “Buck” Sams to realize his calling.

He was 11 years old when his dad took him to see an airshow at what was then Turner Field in Albany. “I was hooked on flying from that moment on,” says Sams BS ’84.

A handful of years later, he was studying computer science at UGA when his roommate convinced him to take the test to qualify as an officer in the U.S. Air Force. Sams gave it a shot and passed, launching him into Air Force ROTC and a military career that has spanned more than three decades.

During his 15 years in active duty, followed by four in the Air National Guard and 14 (so far) in the Air Force Reserve, Sams saw multiple deployments overseas, served as an F-16 instructor pilot, and commanded a fighter squadron and fighter wing, among other accomplishments. But what sticks out to him most is the camaraderie.

When Sept. 11 catapulted the nation into a war overseas, Sams was serving in the South Carolina Air National Guard. He didn’t hesitate.

“While I was in the Middle East, I saw great airmen doing extraordinary work,” he says. “I saw doctors who left their lucrative civilian practices to work in surgical field hospitals. I saw pilots who left their jobs with major air carriers and quickly transitioned to combat military aviators. All around me, there were great Americans doing amazing things for their country.”

After joining the Reserve in 2004, Sams became a full-time pilot for Delta Air Lines. His military obligations didn’t wane, though.

“The Air Force Reserve is no longer the one-weekend-a-month, two-weeks-a-year service from our previous generation,” Sams explains. He’s currently serving as the senior Reserve adviser to the commander, U.S. Pacific Air Forces at Pearl Harbor-Hickam base in Hawaii. “In the Reserve, we talk about balancing the three-legged stool: One leg is the civilian employer, one leg is Air Force Reserve, and the most important leg is your home and family life. It is a daily challenge to keep all three happy, balanced, and in harmony.”

But he wouldn’t have it any other way.

“In no other country would an average farm kid from a small town be given the tremendous opportunities I’ve been given,” he says. “UGA prepared me well for the path I’ve taken and was the key in making this life happen.”