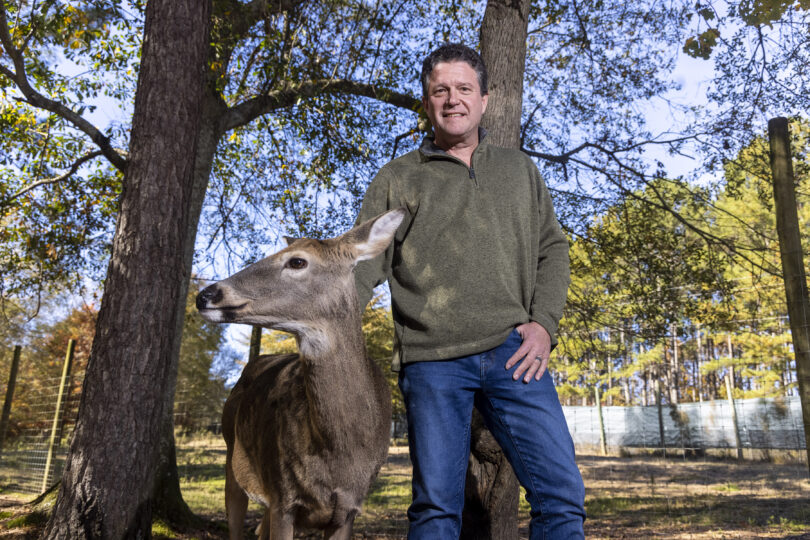 Environmental portrait of Wildlife Research Coordinator David Osborn, shown at the Whitehall Deer Research Facility, is a wildlife research coordinator with the Warnell School of Forestry and Natural Resources. (Photo by Dorothy Kozlowski/UGA)

David Osborn’s desire to learn about wildlife and their habitats has taken him across the country and around the globe.

From Maryland to Oregon and from Portugal to China, his goal is to see and explore all kinds of natural resources.

“There is a part of me that has to break away from this artificial world we live in and reconnect with nature,” said Osborn, wildlife research coordinator in the Warnell School of Forestry and Natural Resources. “Hunting, fishing and outdoor exploring gives me the opportunity to do that.”

Osborn coordinates UGA’s Deer Lab, directed by Gino D’Angelo, assistant professor of deer ecology and management. He’s involved in various parts of the research process, at times providing research ideas, helping to conduct the research and submitting the findings for publication. At other times, Osborn serves in a more administrative role for the lab by acquiring permits, ordering supplies, submitting payroll and other duties while serving as manager of the Whitehall Deer Research Facility. In addition, he provides logistical support for the lab’s graduate students and occasionally guest lectures.

“I think it’s important for people to understand how diverse our university system is,” he said. “There are a lot of people in the university community who might be completely unaware that we have a world-class wildlife research program. We’re representing the University of Georgia globally.”

During his time at UGA, Osborn has participated in wildlife research spanning at least 10 states. And research conducted at the UGA Deer Lab is diverse and has real-world applications, he said. For example, he’s helped with deer vision and hearing studies focused on deer-vehicle collisions and studies centered on the effect of bears, bobcats and coyotes on deer population management. He’s currently working with D’Angelo on a study looking at historical and current rabbit population trends in 31 eastern states. This will allow those states to better understand the local and regional status of rabbit populations and to measure changes in response to a newly emerging rabbit disease.

“My favorite part of my job is when I actually get to participate in the experiments,” he said. “The hands-on things, whether it be working at the captive deer research facility or doing field work, I find those things, because I’m an outdoors person, to be the most enjoyable.”

Before coming to UGA in August 1993, Osborn served as an assistant district wildlife biologist for the Arkansas Game and Fish Commission and as a wildlife resource biologist for the Florida Game and Fresh Water Fish Commission. He earned a bachelor’s degree in fisheries and wildlife management from Arkansas Tech University and a master’s degree in wildlife management from Texas Tech University.

Osborn has always enjoyed the outdoors, hunting and fishing since he was 9 years old. When he’s not out in nature, he enjoys spending time with his family and being active in his church.

Osborn’s other passion is travel, both domestic and foreign. In February 2020, he visited Portugal, renting a car and traveling the country, specifically to learn more about Iberian red deer in the mountainous region bordering Spain. While in Portugal, he taught an invited seminar about the North American Model of Wildlife Management to students at the University of Aveiro. He’s also traveled to China to study a particular fruit tree with potential as a wildlife food source in the U.S. At an international symposium hosted in Baoding, China, he had the honor of serving on the 10-member working group to discuss the global significance of this fruit tree. In the future, he’d like to explore South America and more of Europe.

But Osborn is equally as content serving in his role at the UGA Deer Lab .