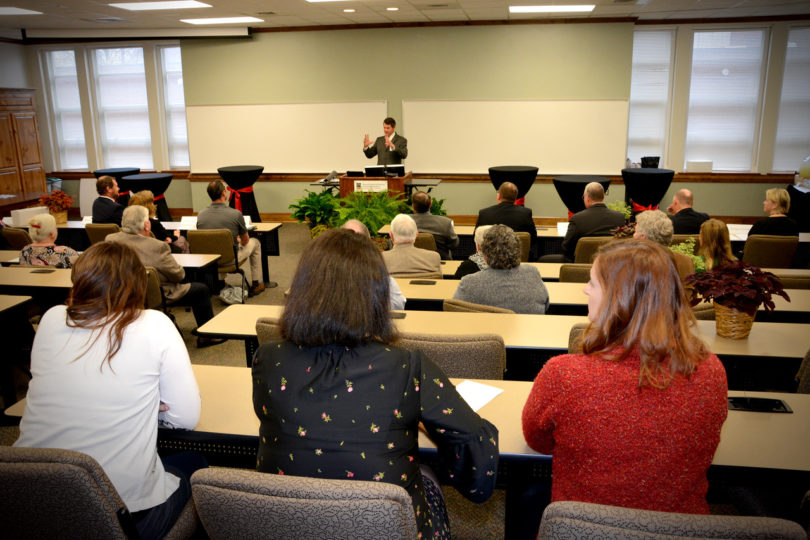 John W. Langdale, III, president and CEO of the The Langdale Company, speaks at the dedication of a classroom and the Center for Forest Business at UGA's Warnell School of Forestry and Natural Resources. The room and center were named in honor of alumnus Harley Langdale Jr.

The University of Georgia’s Warnell School of Forestry and Natural Resources dedicated a classroom and its Center for Forest Business after prominent alumnus Harley Langdale Jr. on March 6.

Langdale, who graduated from UGA in 1937, died in 2013. Gifts from his estate and the Harley Langdale, Jr. Foundation totaling $3.6 million allowed the Center for Forest Business to expand its education efforts and research, as well as its service to the forest industry and private landowners. The center has been renamed the Harley Langdale Jr. Center for Forest Business.

“Harley Langdale Jr. was the consummate entrepreneur,” said Bob Izlar, director of the center. “When he encountered obstacles, he found innovative ways around them, whether it was brow beating the chairman of the regents, reforming national banking laws, helping enact capital gains tax treatment of timber, or creating new and sustainable markets for economic development of forestland. His life was a model for all Georgia. We are humbled by the legacy he has imparted to us.”

In addition to the classroom and center, he will also be recognized with a named professorship, the Harley Langdale Jr. Endowed Chair in Forest Business.

Langdale graduated from what was then the George Foster Peabody School of Forestry in 1937, and over the next few decades he became one of the foremost pioneers in Georgia’s forest industry. As one of the first foresters to make the move from producing turpentine to planting trees for harvest, Langdale’s vision and passion ushered in an era of tree farming and sustainability.