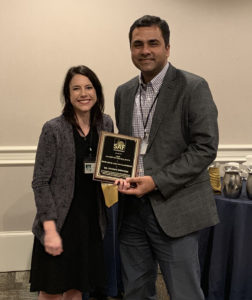 Puneet Dwivedi, associate professor of forest sustainability at the Warnell School of Forestry and Natural Resources, recently received the 2019 Research and Development Award from Southeastern SAF at the organization’s annual meeting in Panama City Beach, Florida. Dwivedi analyzes the sustainability of wood-based bioenergy development, as well as perceptions of forest landowners and modeling of forest-based ecosystem services.

The award recognizes an individual’s outstanding research and development activities that have made significant contributions to forestry within the states served by SESAF, Alabama, Georgia and Florida.

Dwivedi’s research has been cited more than 1,500 times, and he has published 69 articles. He serves as an associate editor at the journal Forest Policy and Economics and as an academic editor at PLOS ONE.