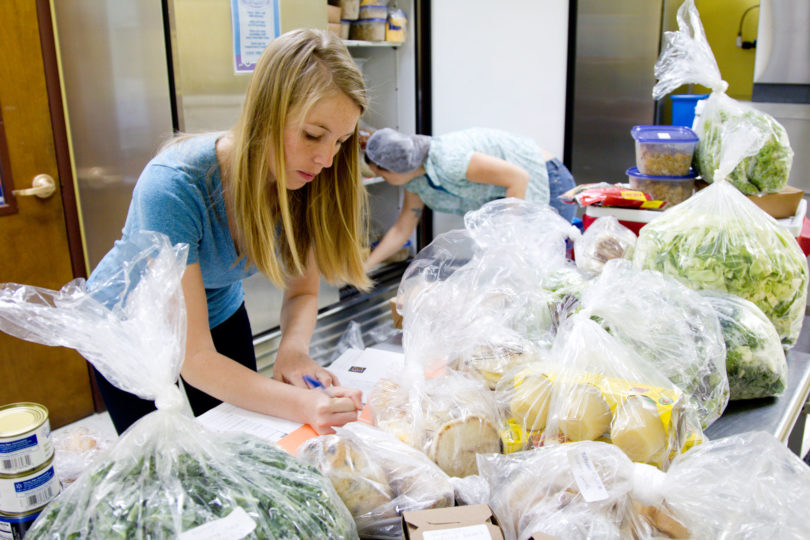 Students in the class learn about food waste, food justice and about hunger among the elderly, among other issues. They read about these subjects, discuss them in class—and then go out in the community and conduct research projects to determine how much edible food grocery stores throw out and see how prevalent levels of hunger are right here in Athens, especially among the aging population.

For the past three springs, the service-learning class, along with the Athens Urban Food Collective service learning course, have helped to set up UGA’s Campus Kitchen Project, a student organization based on a national model that takes surplus food from area businesses and transforms it into nutritious supplemental meals for those who need it most.

The UGA chapter feeds about 25 grandparents raising grandchildren. All the families are food insecure, meaning they might not have enough food, have trouble affording groceries or getting fresh fruits and vegetables.

Food insecurity is an overwhelming problem in Athens, according to Eve Anthony, chief operating officer for the Athens Community Council on Aging, whose clients Campus Kitchen serves. Poverty is an issue, so is access to food. And even then, Anthony said it’s a matter of adequate and appropriate food.

“Are seniors getting fresh fruits and vegetables or are they living on frozen meals?” she said. “If they have diabetes, are they eating right?”

With grandparents raising grandchildren, the problem is compounded.

The idea behind Campus Kitchen is to provide supplemental meals. It’s not food every day, but it’s enough to help.

Families on the program get deliveries every two weeks and get about two to three meals per person, plus a loaf of bread and some fresh produce.

And in the last year, more than 300 UGA students have collected almost 20,000 pounds of surplus food and transformed it into 3,900 meals.

Meals range from flank steak with mashed sweet potatoes to pesto chicken and mixed greens. It all depends on what’s donated by local businesses like Trader Joe’s and Fresh Market and what the UGArden yields.

At the Georgia Center for Continuing Education, when groups overestimate their attendance for meals, the extra meatloaf, baked chicken, vegetables, breads and desserts are donated to Campus Kitchen instead of being thrown away.

For local businesses, donations include meat at its sell-by dates that stores can no longer sell, but can be safely frozen until it is ready to cook. A bag of oranges with one bad fruit or a carton of eggs with one or two broken also isn’t sellable, but Campus Kitchen will gladly discard an orange or the broken eggs and distribute the remaining food to local grandparents and their grandchildren.

The meals are cooked in a commercial kitchen, either at Talmadge Terrace or Jittery Joe’s bakery. Volunteers don hairnets and gloves and learn all about food safety—how to sort food, when food needs to be thrown out or when it can be salvaged. They learn that some expiration dates—like those on canned goods—can be stretched and some—like those for prepared food—are a strict seven days. For meat, freezing will extend its life well beyond the sell-by date.

Deliveries are a highlight for many of the volunteers.

“I got to see the impact this made and how happy they were to see the food, to just have someone come by that cares about them, someone to talk to,” said Amber Flannigan, a fourth-year student from Lithonia majoring in psychology.

Campus Kitchen is about more than food, it also is about providing support.

Deanna Schmidt, an Athens grandmother raising a teenage granddaughter, said Campus Kitchen helps at the time when her budget falls short of the necessities.

“When you’re a grandparent, sometimes you feel isolated and alone. Some days all you want to do is sit down and rest, you’ve earned it,” she said.

Katie Faulkner, a senior women’s studies and art history double major, was in the service-learning class this spring. She’s stayed on with the organization’s leadership and helps plans fundraisers and activities like group meals.

Even with her full class load, Faulkner makes the time for Campus Kitchen.