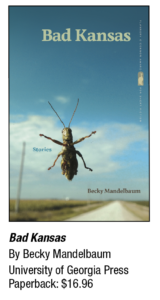 Becky Mandelbaum, winner of the 2016 Flannery O’Connor Award for short fiction, has released a collection of 11 short stories that reveal the complicated underbelly of Kansas, the country’s most flown-over state and the quirky characters who call it home.

In the darkly humorous collection of Bad Kansas, published by the University of Georgia Press, Kansas becomes a state of mind as Mandelbaum’s characters struggle to define their relationship to home and what it means to stay or leave, to hold on or let go.

When a desperate woman finds herself on a date with a rugged man she has nothing in common with, she must decide whether to sacrifice the life of a bear to keep a man’s affection. When his mother starts dating a slimy pizza parlor owner, a young boy must choose whether to align with his mischievous older brother or remain loyal to his mom.

The deeply appealing and peculiar characters in Bad Kansas are determined to get what they want.