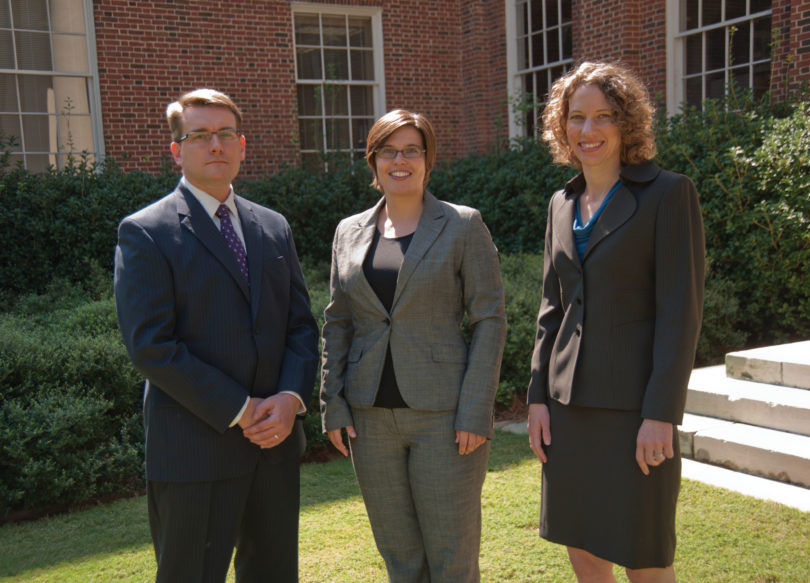 he fact that no one lives forever is concisely expressed in the language of corporate finance.

“Health,” said economist Sara Holland, “is a depreciating asset.” But we can delay the inevitable by making investments in our health, be it simple things such as a gym membership or bigger commitments-a long-term drug regimen, for example, or heart surgery-when necessary.

Understanding the efficiency and effectiveness of how we allocate resources, both individually and collectively, to preserve health is at the center of the field of health economics. UGA’s Terry College of Business made an investment of its own this year, bringing in three new faculty members-Holland, Christina Marsh and William Vogt-whose research agendas are all focused on the health care system and on the institutions, including employers, insurers and hospitals, that support it.

Investing in human capital
Holland joined the college’s department of banking and finance in 2010 after finishing her Ph.D. at the University of California, Berkeley. She is combining “health capital” with the broader measure of “human capital”-the accumulated knowledge, motivation and skills of workers-that businesses use in the production process. Because they can invest in human capital, just as they can in technology or buildings, businesses often spend huge sums of money on health care-which is where Holland’s research is directed.

“I am exploring why firms spend so much on the health of their employees and how it affects firms’ financial results,” said Holland. “The big takeaway so far is that investing in health capital is not destroying shareholder value. Controlling for a number of factors and only looking at large publicly traded firms, my findings suggest that they are close to equilibrium with respect to their health capital investments. This goes against the conventional wisdom that providing health benefits is burdensome to businesses because it exposes companies to higher health costs and takes resources away from production.”

Sharing the costs
Marsh completed her Ph.D. at the University of Minnesota earlier this year and promptly joined UGA’s department of economics. Her research addresses the problem of predicting price responses in health care when the formula is complicated by the presence of “nonlinear reimbursements.” The most common such “nonlinear” is the health insurance deductible, whereby a patient pays medical costs out of pocket until the deductible is met; from that point on, the costs are fully or mostly covered by the insurer.

“The advantage of my approach over those previously cited in the literature is that I was able to control for the bias that the deductible introduces,” Marsh said.

Applying her method, she is able to test scenarios in which employees have higher deductibles or spend more on co-payments but are given lower insurance premiums in return, and vice versa.

“I find that the best scenario has the employee and the employer sharing the costs,” Marsh said, “even if it’s in the form of patients paying small co-payments from the very beginning in exchange for a lower monthly premium.”

Beyond the gold standard
Vogt, the most senior of the new health economics faculty, came to UGA from the RAND Corp. in Pittsburgh, where he was a senior economist. Prior to that he was a health economist at Carnegie Mellon University.

At UGA, Vogt is currently the principal investigator on a million-dollar grant and co-investigator on a multimillion-dollar grant, both funded by the National Institute on Aging. The first project is a reanalysis of data from the 1990s Women’s Health Initiative, a series of mammoth randomized controlled trials or RCTs that addressed heart disease, cancer and osteoporosis in postmenopausal women.

“Although RCTs are the gold standard for measuring the effects of medical treatments, they can only measure these effects for people enrolled in the trial,” Vogt said. “When you are evaluating the effect that a policy change-such as changing the price or availability of a medication-will have on health, you need to consider the population that will start or stop taking the medication in response. I’m developing economic and statistical tools to apply RCT results to these policy-relevant populations.”

Vogt’s second NIA-funded study examines Medicare Part D, the prescription-drug-coverage program administered by private health plans, which are given wide latitude in the benefits they cover and at what price.

In all, the Terry College hired 19 new faculty members in 2010-a banner year that included 15 research-active faculty who are tenured or tenure-track. To commit three of those openings to faculty engaged in health economics was an exceptional measure.

“Entering the field of health economics is an important step for the Terry College,” said Daniel Feldman, associate dean for academic affairs. “With growing public attention to the affordability of health care, it is critical that Terry has a strong set of faculty who can address these issues in rigorous ways. Adding the field of health economics also complements several other health care initiatives of the university as a whole, such as the start of the medical school campus and the recent accreditation of the College of Public Health.”