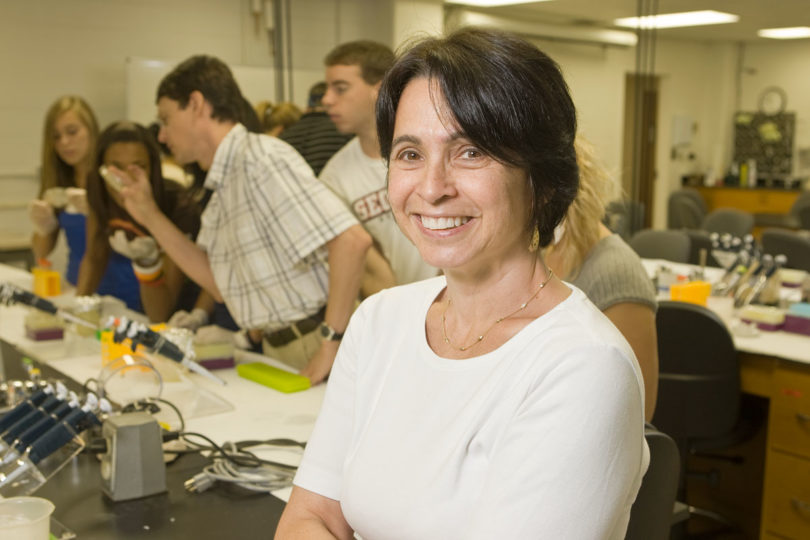 Susan R. Wessler, Distinguished Research Professor of Plant Biology at UGA, has been named a Regents Professor by the University System of Georgia Board of Regents. Her new position takes effect in August.

Regents Professorships are granted by the board to outstanding faculty members for an initial period of three years and are renewable for a second three-year period based on recommendations. Wessler is the first woman named a Regents Professor at UGA.

Awardees receive a $10,000 permanent increase in salary, in addition to the merit raise, in the year of initial appointment. They also receive a yearly fund of $5,000 in support of their scholarship.

“I consider this a great honor, and I am grateful to the regents for the recognition,” says Wessler. “It is a tribute to the work of many talented people in my lab over many years.”

Wessler is recognized for her work in molecular biology and genetics. She is best known for her studies of transposable elements in plant genomes and their contribution to gene and genome evolution.

“I am personally delighted that Dr. Wessler, one of our best and brightest, has received this award,” says Garnett S. Stokes, dean of the Franklin College of Arts and Sciences. “It is a tribute to a magnificent career that will continue to bear fruit for many years to come.”

Wessler was born in New York City in 1953. She is a graduate of the Bronx High School of Science and received her bachelor’s degree in 1974 in biology from the State University of New York at Stony Brook. She received her Ph.D. in biochemistry from Cornell University in 1980 and was a postdoctoral fellow of the American Cancer Society at the Carnegie Institution of Washington, department of embryology, in 1980-1982. She began her career at the University of Georgia in 1983 as an assistant professor of botany, rising through the ranks to full professor of botany and genetics in 1992. She has held the title of Distinguished Research Professor since 1994. She is the recipient of the Creative Research Medal (1991) and the Lamar Dodd Award (1997) from the University of Georgia. In 1998 she was elected to the National Academy of Sciences and in 2004 was elected Councilor of the Academy.

“Susan Wessler is an outstanding scientist who has done pioneering work on transposable elements and their role in evolution,” says Wyatt Anderson, former dean of the Franklin College and himself an NAS member.

She is co-author of The Mutants of Maize and of more than 100 research articles. She is one of the principle authors of Introduction to Genetic Analysis (eighth edition), the leading textbook used in introductory genetics courses in colleges and universities throughout the world. In addition, she is an associate editor of the journal Genetics and is on the editorial boards of the Proceedings of the National Academy of Sciences and Current Opinions in Plant Biology. Wessler is also a much sought-after speaker at seminars worldwide, appearing across the U.S. and in such other places as China and Ireland.