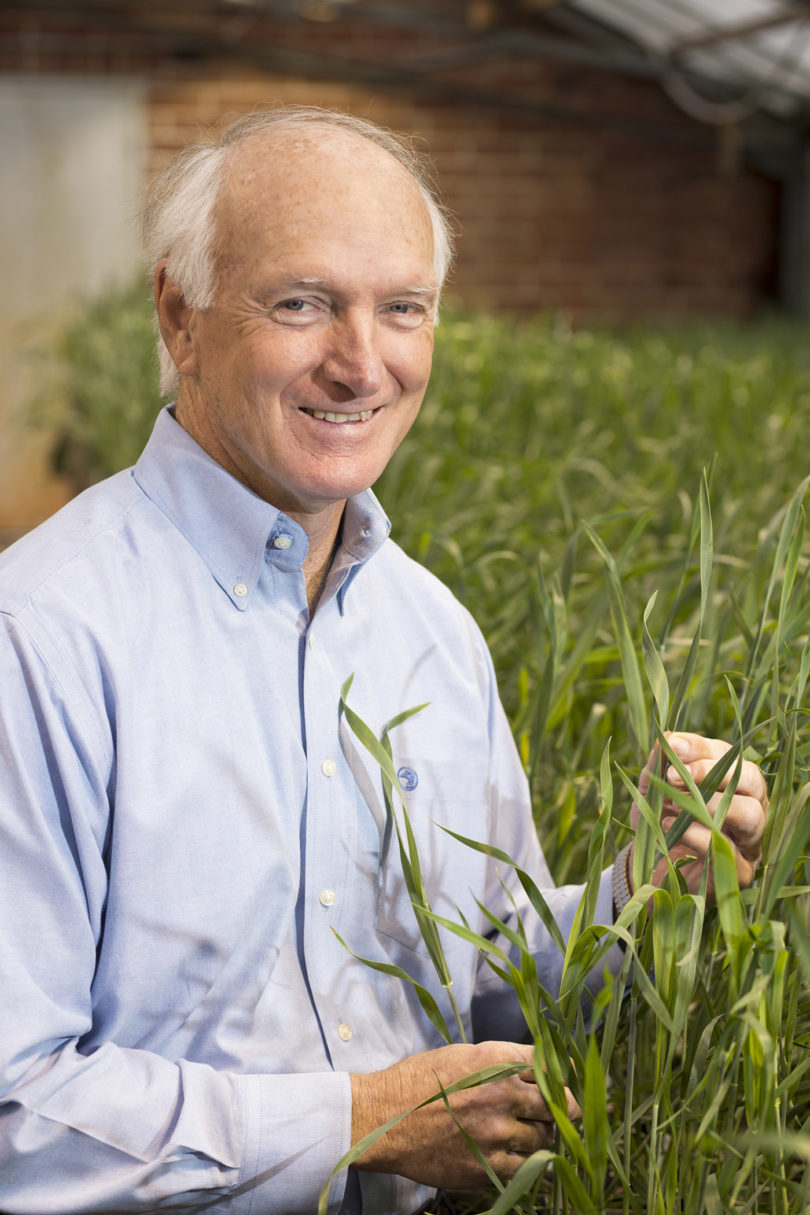 As a young man working on his family’s farm in Perry, Jerry Johnson loved the sight of wheat growing in the fields. Decades later, Johnson, now a respected plant breeder and crop and soil sciences professor, received the 2015 Inventor’s Award from the UGA Research Foundation for his work breeding wheat varieties for farmers in Georgia and across the Southeast.

“I grew a lot of wheat and soybeans with my father and my uncle. I always thought the wheat was pretty growing in the fields during the wintertime, when everything else is brown and there are no leaves on the trees,” he said.

Johnson attended Abraham Baldwin Agricultural College and UGA, completing his undergraduate degree in agronomy. While at UGA, he worked with Morris Bitzer in his wheat breeding program before accepting an assistantship at Purdue University. There, he earned master’s and doctoral degrees in plant breeding and genetics. He was an assistant professor at the University of Maryland before returning home to UGA in 1977 to teach and conduct research at the Griffin campus.

Thirty-eight years later, Johnson has produced close to 50 wheat varieties. Throughout his career, he made at least 1,000 wheat crosses annually, which led to an average of two new wheat varieties each year.

To breed a new variety, Johnson takes two plants and crosses them together to get what’s called an “initial cross.” He watches those crosses grow generations for about six years before selecting the best crosses. Three more years of field testing gives Johnson time to view, evaluate and record the new variety’s performance.

All of the wheat varieties released through Johnson’s research program in UGA’s College of Agricultural and Environmental Sciences were bred to increase farmers’ yields while decreasing the impact of insects and disease.

“The primary goal is that we breed for yield—because that’s how farmers get paid—and excellent test weight,” he said. “To maintain the yield, we have to build in Hessian fly (a major wheat pest) and soil-borne disease resistance. Other diseases, like leaf rust, can be controlled with fungicides if necessary, but there’s a cost involved there.”

Johnson, who recently retired but plans to help transition the UGA wheat breeding program into the hands of Mohamed Mergoum, newly named program breeder, is most proud of AGS2000. UGARF licensed AGS2000 to Georgia-based AgSouth Genetics and the variety “helped them become successful,” Johnson said.