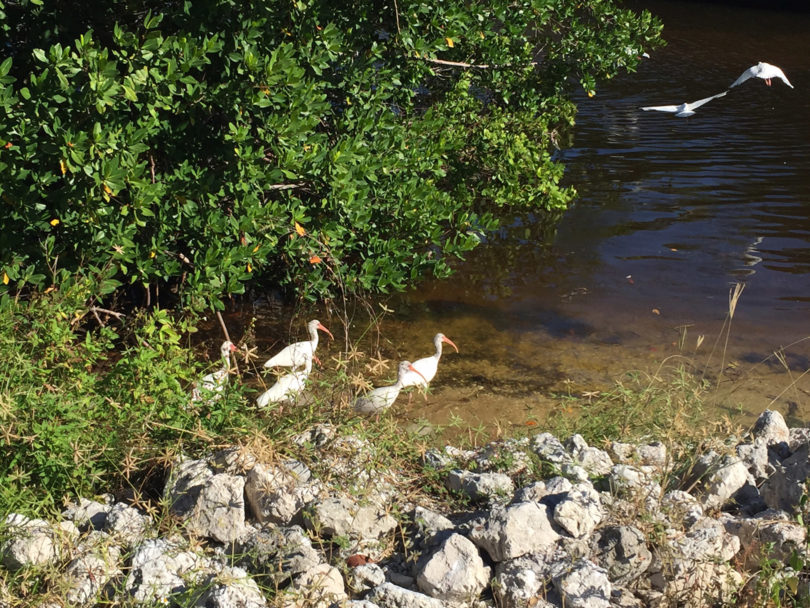 The more urbanized a place is

Athens, Ga. – The more urbanized a place is, the more white ibises there are carrying salmonella—the same kind that can make people sick, a new University of Georgia study has found.

In a recently published paper, Georgia researchers looked at how urbanized white ibises might be shedding salmonella, particularly as people feeding birds at public parks has become a concern for wildlife biologists.

“White ibises likely become infected with salmonella from environmental sources, and then have the potential to transmit it to people visiting urban parks,” said Sonia M. Hernandez, an associate professor with a joint appointment at UGA’s Warnell School of Forestry and Natural Resources and the Southeastern Wildlife Disease Study at the College of Veterinary Medicine.
“People feed ibises in these parks, and these birds form large flocks that drop a lot of feces on picnic tables, benches and other surfaces,” she said.

Salmonella is one of the most common causes of intestinal diseases for both people and animals. Found worldwide, Salmonella enterica sickens 1.2 million people and kills 450 each year.

Salmonella can also be deadly to wildlife, and researchers have found instances of avian salmonellosis on the rise, even causing “catastrophic outbreaks,” Hernandez said.

People feeding white ibises at public parks turns the birds into beggars and changes their health, ecology and behavior, and Hernandez and other Georgia researchers are also looking into the overall effects of this problem.

For this study, they collected fecal samples from white ibises at 17 sites in Palm Beach County, Florida-two were within natural areas, but the other 15 were urban parks, zoos or neighborhoods. They also collected feces from ibis nestlings in Broward and Miami-Dade counties, ultimately collecting a total of one sample each from 333 birds.

The found that 55 of the birds they collected samples from were shedding salmonella, and that the rate of salmonella shedding went down as the percentage of wetlands and grasslands around the sample site increased. The opposite was also true: The more developed the surrounding area was, the higher the salmonella rates they found in the ibises. Of importance is that even urbanized ibises have to go back to natural areas to breed, thus, they can move various strains of salmonella from cities to natural areas, Hernandez said.

By testing the serotypes of salmonella the ibises carried, researchers learned that 33 percent of them were in the top 20 that infected humans during the years of the study, 2010 to 2013, according to the Centers for Disease Control and Prevention. Fifteen percent of those were most frequently reported in Florida for human infections the same years they conducted the study.

“Probably the most important finding with regards to public health is that 44 percent of the strains of salmonella we found exactly matched strains in the PulseNet Database managed by the CDC that had caused disease in people and which were not associated with food outbreaks,” Hernandez said.

The article, “Urbanized white ibises (Eudocimus albus) as carriers of Salmonella enterica of significance to public health and wildlife,” was recently published in PLOS One. The article can be found online at http://journals.plos.org/plosone/article?id=10.1371/journal.pone.0164402.