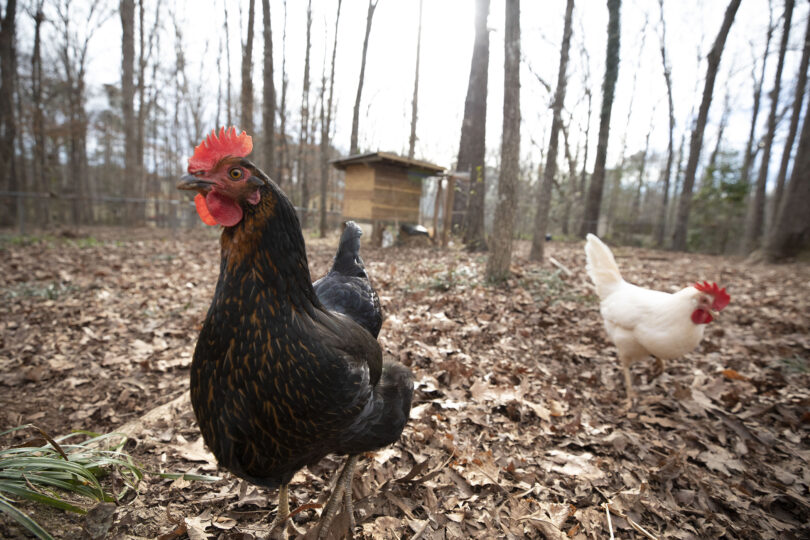 Wild birds come into contact with backyard chicken flocks more frequently than people realize, creating a pathway for pathogens to transmit back and forth, according to new research from the University of Georgia. Such pathways increase the risk for spillover events that can threaten the health of all these groups—wild birds, backyard chickens and the people who care for them.

“Most people probably don’t realize how frequently wild birds come in and take advantage of the food and water that’s put out for chickens,” said Sonia Hernandez, professor of wildlife disease at the Warnell School of Forestry and Natural Resources and the College of Veterinary Medicine. “Wild birds learn that resource, and those contact points can become places where pathogens like Newcastle disease virus and avian influenza virus can be transmitted back and forth.”

For the study, published in Epidemiology and Infection, Hernandez and a team including first author Andrea Ayala conducted a supplemental feeding experiment followed by observations at three sites with backyard chickens in north Georgia. At each site, they identified the species of wild birds that shared habitat with the chickens, were detected more frequently, and entered the coops. The team identified 14 wild bird species that entered the coop to consume supplemental feed and were considered high risk for pathogen transmission.

“Interestingly, seasonality played a role—but not the one that we expected,” said Ayala, a postdoctoral researcher at Yale University who earned a Ph.D. in comparative biomedical sciences at UGA. “We had hypothesized that feeding rates would be highest in winter, but for some species such as blue jays, the opposite was detected.”

Over 60 hours of observation, 1,574 individual wild birds were detected across the three sites, comprising 72 species from 24 families. Tufted titmice (15.6%), northern cardinals (13.2%), Carolina chickadees (7%) and Carolina wrens (6%) were the four most commonly detected species. Tufted titmice and northern cardinals had the highest contact rates with backyard chickens.

There were some surprises in terms of species, according to Hernandez. The sites attracted species that were seed eaters and grain eaters, and also some insectivores.

“The northern cardinals are ubiquitous seed eaters, so we expected them to be frequent, but that’s not the case for the tufted titmouse or the Carolina wren,” she said. “They will eat bird food, but they’re also insectivores and were likely attracted to insects that were attracted to the food.” 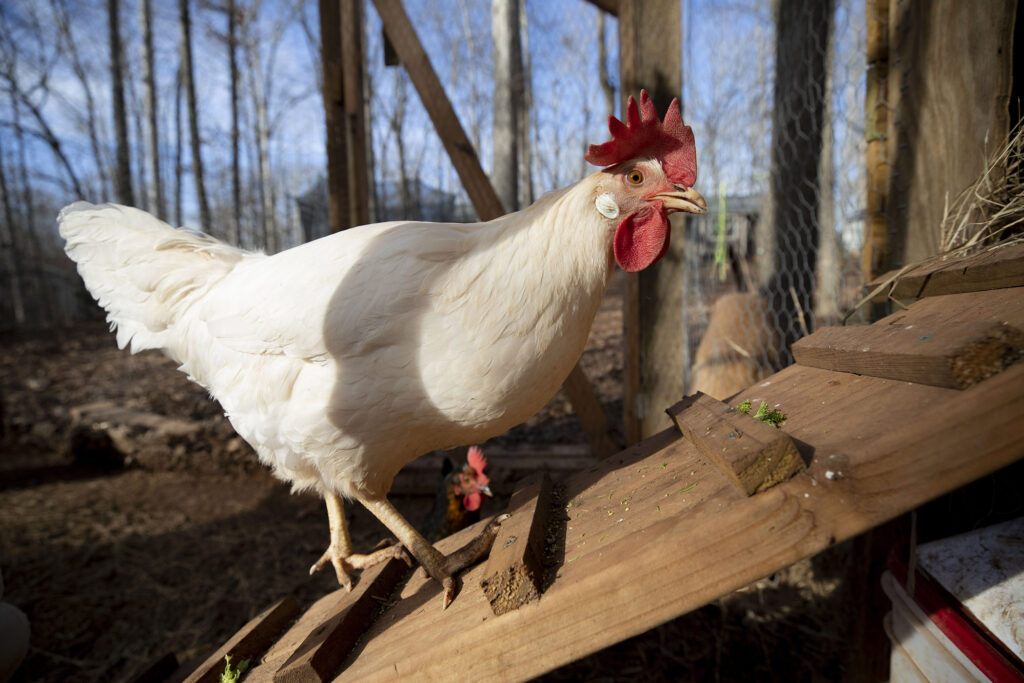 The presence of food presents an ecological opportunity that may attract birds who wouldn’t necessarily come down to the ground, said Hernandez. In the forest, some birds are at the very top of the canopy, some are in the middle, some are in the understory, and some are on the ground.

“Offering supplemental food blurs those lines, because birds are more willing to cross those lines for a resource that’s provided artificially,” she said.

The best way to prevent contact between backyard chickens and wild birds is to offer food in a place that’s secure—in the coop behind mesh where chickens can access it, but wild birds can’t.

“Offering food in the coop saves the owner money, keeps the food from being exposed to rain and other elements, and minimizes the amount of waste in the area,” Hernandez said. “If chickens are allowed to free range, don’t offer them food during that time. A songbird has no reason to come down near a chicken unless there’s a food source.”

Songbirds and other wildlife are extremely vulnerable to the introduction of pathogens from domestic animals, Hernandez said. Newcastle disease virus and avian influenza virus circulate in backyard chickens, but there are other pathogens that can also circulate.

“Salmonella is something that kills songbirds every year, and mycoplasma makes songbirds sick,” she said.

“Wild birds in North America are currently experiencing an avian influenza outbreak that’s severely impacting species like bald eagles, vultures and waterfowl. Some of those species have needed very careful management to return them to viable populations because they were at the brink of extinction not that long ago. Yet avian influenza threatens to undo all that effort, planning and careful monitoring. By studying how pathogens move among domestic and wild birds, we can better understand how to manage and prevent problems in the future.”

“Families with children would be susceptible if they’re handling chickens that are shedding salmonella, since children are less likely to have good hygiene,” she said.

Last year, the Centers for Disease Control and Prevention reported an outbreak of salmonella typhimurium, which causes disease in people but also kills songbirds.

“What was unusual about that outbreak is that a high percentage of people reported contact with either wild birds or bird feeders,” said Hernandez, who is working with the CDC on this topic.

“This paper is yet another piece of that puzzle. Sometimes people get sick and don’t know where it comes from,” she said. “It’s possible that it comes from handling the dishes, the feeders or the waterers, either from the chickens or from the wild birds.”

Although pathogen crossover can have serious consequences, Hernandez wants to promote awareness—and responsible practices—rather than fear.

“We live in an era in which the boundaries between human health and wild animal health are very tenuous because we’ve created circumstances that allow for crossover,” she said. “We want people to be aware that all the things that impact the environment and impact the health of animals—pollution, contaminants and pathogens—also affect our health. We are not separated from our environments.”

For people who like to feed birds, Hernandez suggests that instead of providing food, it’s better to create a backyard habitat that allows wild birds to feed themselves.

“Given an opportunity to forage for natural food, songbirds will do better with that,” she said.