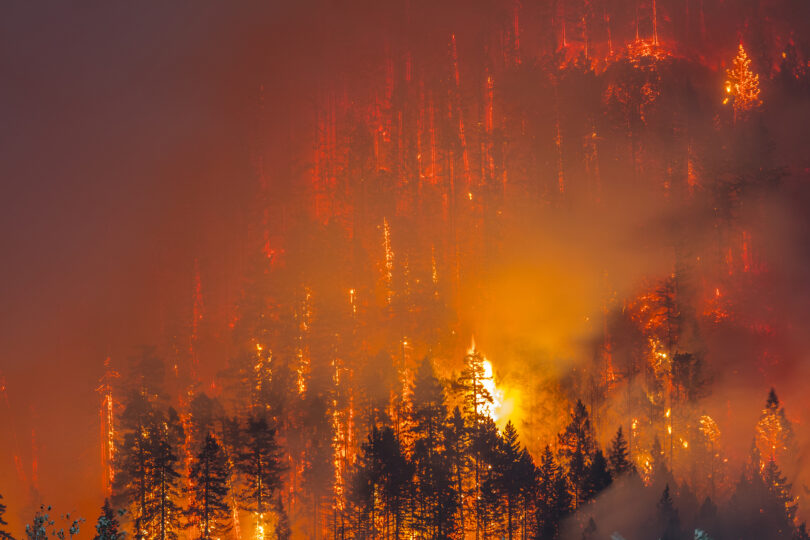 New research from the University of Georgia identified the 14 states in the lower 48 with the highest wildfire risk in the U.S. (Getty Images)

Editor’s note: Dean Matthew Auer testified before a Congressional subcommittee on the growing impact of wildfires on the insurance market Sept. 22.

With fires raging from California to Alaska, the 2022 wildfire season is off to a violent start. It’s an ominous sign of what promises to be another record-breaking fire season in the U.S.

Many of those at risk are lower-income Americans who face canceled homeowners insurance policies and rising premiums, according to new research from the University of Georgia.

Published in Forests, the study found that counties with moderate-to-high wildfire risk are more likely to have higher poverty rates. Many of these counties reside in states that are dominated by a handful of insurance companies. Homeowners’ options in these areas may be limited if they need to replace a policy that has been terminated.

“The overlap of wildfire risk, poverty and concentrated insurance markets should get people thinking about policies and interventions to help the most vulnerable homeowners,” said Matthew Auer, lead author of the study and dean of the School of Public and International Affairs.

Among those states, 98 counties had high wildfire hazard potential, the study found. The only states without a high-risk county were Oklahoma and Wyoming. About 60% of the high-risk counties in the remaining 12 states were designated as higher poverty, based on U.S. Census Bureau data.

None of us, really, in this day and age can be blasé about wildfire risk.” —Matthew Auer, School of Public and International Affairs

The researchers also found discrepancies between the U.S. Forest Service’s data on which counties are at high risk of wildfires and the number of counties deemed at risk by First Street Foundation, a nonprofit that provides a national, peer reviewed wildfire risk model for properties in the lower 48.

“The First Street Foundation data should give everybody pause because in it there are entire states that have comparatively high wildfire risk,” Auer said. “States we tend not to think about as majorly susceptible to destructive wildfire are in harm’s way, including, for example, Nebraska and Oklahoma.”

“None of us, really, in this day and age can be blasé about wildfire risk.”

Protecting against wildfires may require government intervention in insurance industry

The ones that are staying in the market are not only upping their prices and frequently reducing what their policies cover. They’re also requiring homeowners to adopt fire safety measures, such as clearing landscaping and brush away from their homes to stall a potential fire’s spread.

That’s doable in wealthier counties, where incomes are high and homeowners can cope with higher premiums or even entirely rebuild their homes, if necessary. But for others, those changes add up.

“For folks who are in poorer counties, homeowners don’t have as much flexibility, and they don’t have the ability to afford all of the wildfire prevention strategies that may be required by the few companies willing to insure homes in wildfire-prone areas,” Auer said. “This issue hasn’t been addressed in some states, and it needs to be because the situation we see today is just going to get worse.”

In California, the state has stepped in to prevent insurance companies from not renewing policies in areas affected by catastrophic wildfire. The commissioner also created a program called Safer from Wildfires, which incentivizes homeowners to make fire-protective upgrades and encourages insurers to come back to the market.

California homeowners who find themselves without a lot of insurance options often have to settle for what’s referred to as “insurance of last resort.” The premiums are high, and the policies don’t cover much. Policyholders may also have to take measures to reduce the risk of fire damage to their homes.

But it’s better than nothing.

“Wildfire doesn’t care about party affiliation,” he said. “Our homes aren’t Republican or Democrat homes. They’re just homes in the way of wildfire.”