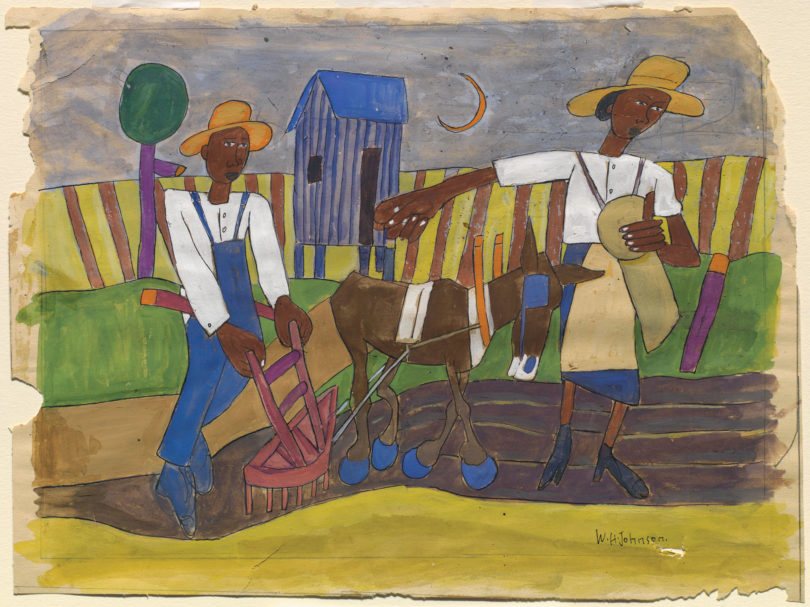 Athens, Ga. – A new exhibition from the Smithsonian Institution Traveling Exhibition Service will feature rare paintings by William H. Johnson from the collection of the James E. Lewis Museum at Morgan State University, at the Georgia Museum of Art from Feb. 16 to May 12.

An essential figure in modern American art, William H. Johnson (1901-1970) was a virtuoso skilled in various media and techniques and produced thousands of works over a career that spanned decades, continents and genres.

The exhibition made its debut at the Gari Melchers Home and Studio in Fredericksburg, Va., and will continue on a 10-city tour through 2014. Developed by Morgan State University and SITES, the exhibition is made possible through the generous support of the National Endowment for the Arts, the Henry Luce Foundation and Morgan State University Foundation Inc. Additional support for this exhibition was provided by Ford Motor Company Fund.

The pivotal stages of Johnson’s career as a modernist painter are assembled in this group of rarely seen paintings. Every step of his artistic development is conveyed-from his post-impressionist and expressionist works of the 1920s, to vibrant vernacular paintings from the end of his career in the 1940s, in which Johnson articulated his distinctive, unforgettable vision as an American modern artist.

The paintings boast a remarkable history. In 1956, the Harmon Foundation, a nonprofit that helped foster awareness of African art from 1922 until its demise in 1967, took ownership of Johnson’s own collection of art-saving it all from being destroyed. When the foundation had to shut its doors, it donated more than 1,000 works to the Smithsonian’s National Collections of Fine Arts (now the Smithsonian American Art Museum). The terms of the agreement called for the Smithsonian to donate works to several black colleges and universities, including Morgan State University. The founding chair of Morgan’s art department, James E. Lewis, was first to select these works for his museum’s permanent collection.

The exhibition is complemented by an illustrated companion book, “William H. Johnson: An American Modern” (University of Washington Press, 2011) with essays by Richard J. Powell, Leslie King Hammond and others. The book features some of the world’s premier scholars of Johnson and African-American art history re-examining the artist and his work.

GMOA will present several events in conjunction with the exhibition, including its annual Black History Month dinner, Thursday, Feb. 21, at 5:30 p.m. Carissa DiCindio, curator of education at the museum, will lead a discussion on Johnson’s painting “High Peaks,” which is in GMOA’s permanent collection, Wednesday, Feb. 27, at 2 p.m. A Family Day event, Portraits: Bold and Bright, will focus on Johnson’s work and is scheduled for Saturday, March 23, from 10 a.m. to noon. On Friday, March 22, at 6 p.m., the museum will celebrate this exhibition as well as others at its spring quarterly reception, 90 Carlton. Paul Manoguerra, in-house curator, will lead a tour Wednesday, March 27, at 2 p.m., and on Thursday, April 25, Museum Mix, an after-hours art party featuring a live DJ and free refreshments, will encourage new audiences to experience Johnson’s work. Most events are free and open to the public.

Morgan State University, founded in 1867, is a Carnegie-classified doctoral research institution offering more than 60 academic programs leading to bachelor’s degrees as well as programs at the master’s and doctoral levels. As Maryland’s public urban university, Morgan serves a multiethnic and multiracial student body and seeks to ensure that the doors of higher education are opened as wide as possible to as many as possible. For more information on Morgan State University, see www.morgan.edu.

The National Endowment for the Arts was established by Congress in 1965 as an independent agency of the federal government. To date, the NEA has awarded more than $4 billion to support artistic excellence, creativity and innovation for the benefit of individuals and communities. The NEA extends its work through partnerships with state arts agencies, local leaders, other federal agencies and the philanthropic sector. To join the discussion on how art works, see the NEA at www.nea.gov.

The Henry Luce Foundation was established in 1936 by Henry R. Luce, the co-founder and editor-in-chief of Time Inc., to honor his parents, who were missionary educators in China. The Foundation builds upon the vision and values of four generations of the Luce family: broadening knowledge and encouraging the highest standards of service and leadership.

SITES has been sharing the wealth of Smithsonian collections and research programs with millions of people outside Washington, D.C., for almost 60 years. SITES connects Americans to their shared cultural heritage through a wide range of exhibitions about art, science and history, which are shown wherever people live, work and play. Exhibition descriptions and tour schedules are available at www.sites.si.edu.