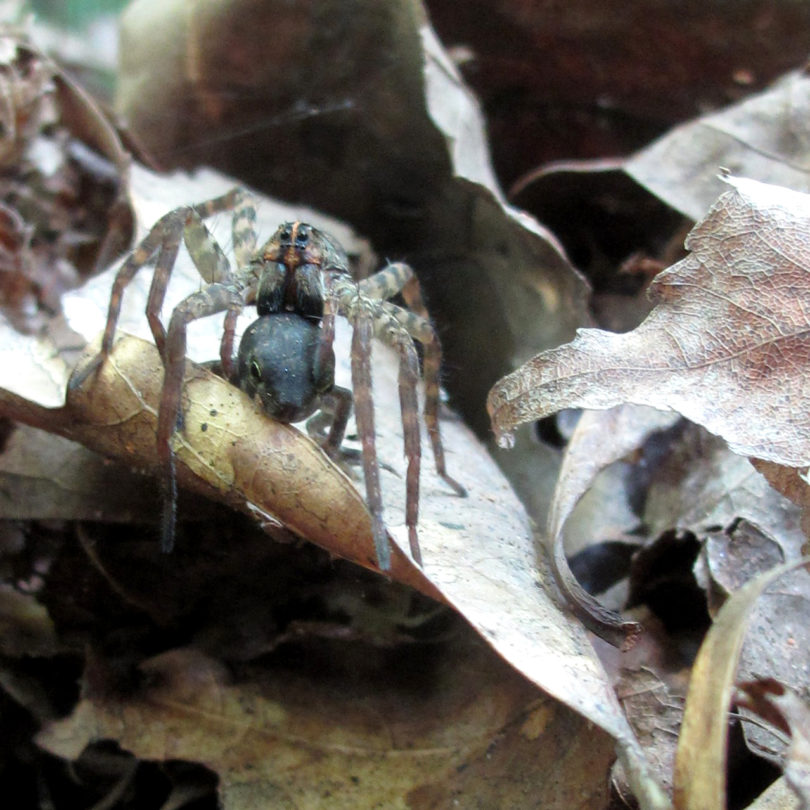 Athens, Ga. – An invasive grass species frequently found in forests has created a thriving habitat for wolf spiders, who then feed on American toads, a new University of Georgia study has found.

Japanese stiltgrass, which was accidentally introduced to the U.S. in the early 1900s, is one of the most pervasive invasive species and has spread to more than a dozen states in the past century, particularly in the Southeast. Typically found along roads and in forests, it can survive in widely diverse ecosystems and has been found to impact native plant species, invertebrate populations and soil nutrients.

In a new study recently published in the journal Ecology, UGA researchers found that Japanese stiltgrass also is affecting arachnid predators: Lycosid spiders, commonly known as wolf spiders, thrive in the grass. As their numbers grow, more spiders then feed on young American toads, ultimately reducing the amphibian’s survival wherever this grass grows.

John Maerz, an associate professor in UGA’s Warnell School of Forestry and Natural Resources and one of the paper’s authors, said they found the grass had the greatest negative impact on toad survival in forests where toad survival was naturally high.

“In other words, the grass is degrading the best forests for young toad survival,” Maerz said. “Another important finding was that the invasive grass affects toads by changing interactions among native species rather than the grass having a direct effect on the native toads.”

Jayna DeVore, who led the project while earning her doctorate in the Warnell School, said people often don’t fully realize how much structural changes in an environment can affect how animals interact.

“Ecosystems are so incredibly complex that it can be surprisingly difficult to foresee just how environmental changes, such as an invasion, will affect organisms living in affected areas,” said DeVore, who is now a postdoctoral fellow with the University of Sydney in Australia. “I think that one of the unique things about this study is that it not only documents the fact that this plant invasion reduces the survival of a native species, but also determines the mechanism through which that occurs.”

Maerz has been interested in the effects of Japanese stiltgrass on forest ecosystems for years. When DeVore and Maerz originally found lower survival of American toads at eight locations in Georgia where stiltgrass is actively invading, they initially speculated that the grass was reducing the toads’ food supply by reducing insect populations—few native insects eat the Asian grass. However, after noticing the wolf spiders routinely preying upon toads in invaded habitats, it began to click, Maerz said.

Spiders are incredible predators, he explained, and they eat everything—even other spiders. That typically keeps spider populations in check, Maerz said, but Japanese stiltgrass is “kind of like a tall shag carpet,” and it provides the cannibalistic spiders refuge from one another. The accumulation of large, predatory spiders in these invaded habitats then results in higher mortality for small toads that have recently emerged from wetlands.

“Spiders are actually tremendously important and incredibly abundant predators on the forest floor, and they will eat many of the small species that live there, so this effect is unlikely to only influence toads,” DeVore said. “And there are also other ways in which invasion by this Asian plant may influence species on the forest floor. We documented changes in invertebrate densities and soil characteristics that may affect other species that depend on these invertebrates for prey or are sensitive to changes in soil properties such as moisture and pH.”

DeVore and Maerz are trying to determine whether the grass invasion is affecting other amphibian species in similar or predictable ways. It’s “logistically impossible” to test the effects on an environmental change on every species that could be impacted, DeVore said, and even related species often react dramatically differently. The researchers hope to show that by accounting for certain aspects of the behavior and biology of a species, it will allow them to predict how they react.

The paper by DeVore and Maerz was featured on the cover of the July issue of Ecology and can be found online at http://www.esajournals.org/doi/full/10.1890/13-1715.1.