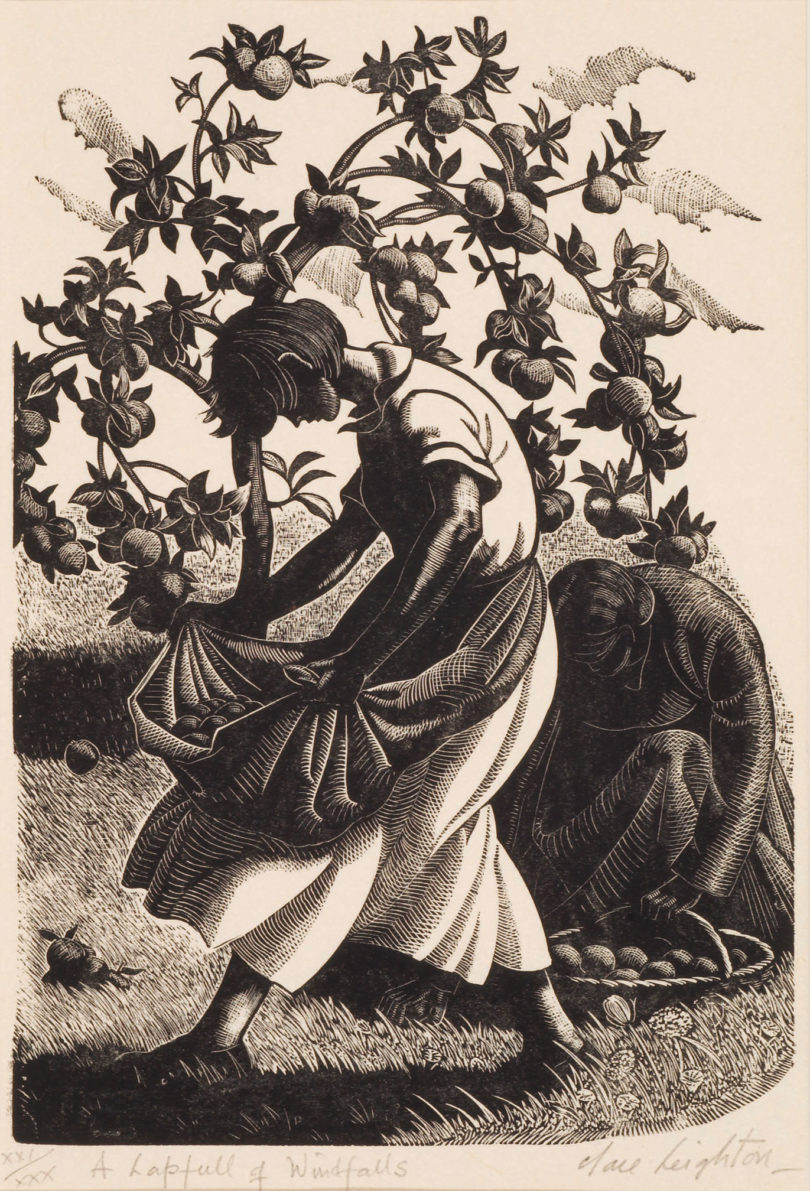 Clare Leighton's A Lapfull of Windfalls

The exhibition Quiet Spirit, Skillful Hand: The Art of Clare Leighton will be on display at the Georgia Museum of Art until Feb. 3. Organized by the Mint Museum of Art in Charlotte, N.C., this chronological and stylistic overview of Leighton’s career includes more than 180 works from the Mint Museum’s Pratt Collection, one of the largest collections of Leighton’s work in the U.S.

A native of London, Leighton was best known for her wood engravings, and this exhibition will showcase her prints, drawings, rarely seen watercolors and a set of 12 Wedgwood plates entitled, New England Industries. Leighton created many of these works when she moved to the U.S. during World War II and settled in the agrarian South. The exhibition also will include her Canadian Lumber Camp series, which dates from her early visits to North America.

Born into an artistic family, Leighton knew from an early age that she would pursue a career in the arts. In an unpublished essay, she wrote, “It isn’t a matter of deciding, as though one were planning for a career as a doctor or a lawyer. . . the decision is already made and one has been stamped by it from the earliest moments-even before one could formulate what was happening.”

“Leighton was an important figure in the revival of wood engravings and illustration and faced numerous biases due to her gender,” said Paul Manoguerra, GMOA chief curator and curator of American art. “Throughout her lifetime, she struggled with challenges regarding the validity of her work as a female artist and prejudices against wood engraving as a legitimate art form.”

Leighton wrote 15 books and created more than 700 prints. She used the world around her as a constant source of inspiration and had a key interest in working people. Works like Scything display her respect for those who tended the Earth and held hard labor as a virtue. The print has natural undulating lines that mimic the rhythms of nature.

During her lengthy career, Leighton illustrated her own writing as well as classic and contemporary literature, including notable commissions for books written by Thomas Hardy, Emily Brontë and Thornton Wilder. Quiet Spirit, Skillful Hand will feature numerous wood engravings that Leighton created specifically as book illustrations.