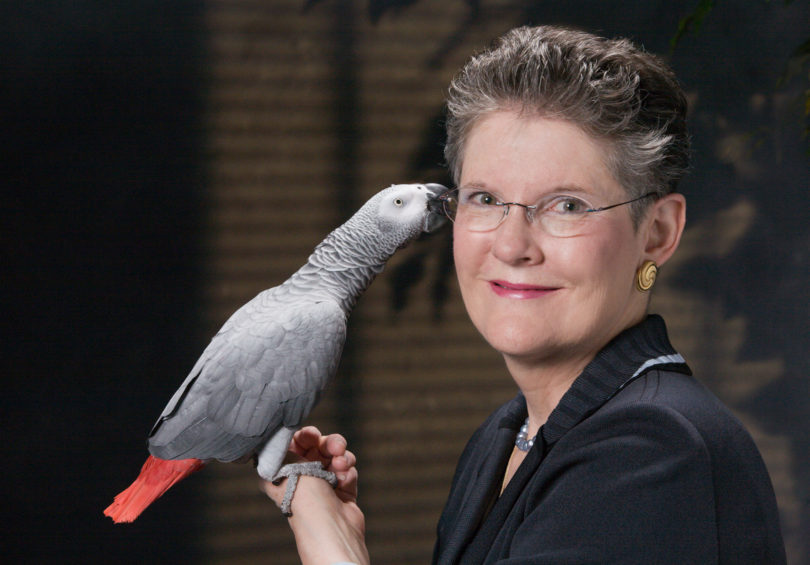 On a Monday morning in April, the offices of the Willson Center for the Humanities and Arts are filled with the sounds of a smoke detector beep, a truck backing up, a telephone and the occasional outburst of “Cosmo.”

The sounds aren’t coming from their usual sources, but rather from Betty Jean Craige’s 8-year-old African Grey parrot, Cosmo, whom she’s brought in for a brief visit.

Craige, director of the center and University Professor of Comparative Literature, doesn’t usually bring the vocal grey and burgundy bird to the office, but will stop by occasionally if the pair has a speaking engagement.

In April, the book she wrote about Cosmo was published. Conversations with Cosmo: At Home with an African Grey Parrot is full of funny stories of Cosmo’s antics, including the 150 words she knows and the jokes she tells.

The 133-page book features stories about Cosmo mimicking the answering machine and reciting Craige’s home phone number. It also includes a story about 15-ounce Cosmo picking up a leash and slowly walking Mary, Craige’s American Eskimo dog, down the hallway.

“I wrote the book because I thought I had a remarkable bird and I wanted to show that an African Grey that spends time with people can talk intelligently and develop a sense of humor,” Craige said. “She has a terrific sense of humor. Whenever I have company, she tries to get the company to laugh by doing her telephone jokes.”

Many African Greys have substantial vocabularies and even make jokes, but Craige said Cosmo stands out because of her ability to coin new phrases.

No stranger to the spotlight, Cosmo has been featured on Craige’s Christmas cards (along with her dogs) since 2002. Cosmo also has helped Craige give presentations to anthropology and psychology classes.

Craige had always thought she would write a book about Cosmo, and for years had pondered the voice and tone the book should have. Then, on Nov. 5, 2008, she attended a Hugh Hodgson School of Music event. On the way back she had the idea to start every chapter with a conversation that she had with Cosmo. She went home and started writing-day and night-and finished the book before Christmas.

A departure from her usual academic writings, Craige said that this book was a joy to write. All the research was in her head, and it was a fond way to recount Cosmo’s steps to acquiring language and developing a sense of humor.

“I wanted my book to be humorous, but I also wanted to remain credible as an author,” Craige said.

So she made an effort to pepper in studies and information on African Grey parrots whenever she could. The book even includes a tip section for African Grey owners.

Cosmo also has been featured in UGA research. Erin Colbert-White, a psychology graduate student, carried out her master’s thesis research investigating how Cosmo’s language-like use of speech varied across four different social contexts. Now a doctoral student, her work revolves around how Cosmo uses speech to effectively maintain and regulate her social relationship with Craige.

Craige and Cosmo have several upcoming appearances including May 23 at 2 p.m. at the Barnes and Noble bookstore on Atlanta Highway. On May 27 at 10 a.m. Craige and Cosmo will speak to UGA retirees at the OLLI meeting at River’s Crossing.

Cosmo enjoys talking to children and the pair also visits public schools to teach children about animal intelligence, cognition and language acquisition. Craige said she really wants children to understand that animals have brains and think about humans.

On the most recent furlough day, the duo visited about 60 students at Kings Bridge Middle School in Jackson County.

The visits usually start with Craige playing a CD of Cosmo talking and whistling.

“If I leave her in the cage, she will talk a lot to try and get out. She promises not to bite,” Craige said.

Cosmo likes to chirp “Cosmo wanna go to work” when she’s “working” at her presentations. When it’s time to leave, without prompting she will say “goodbye.”