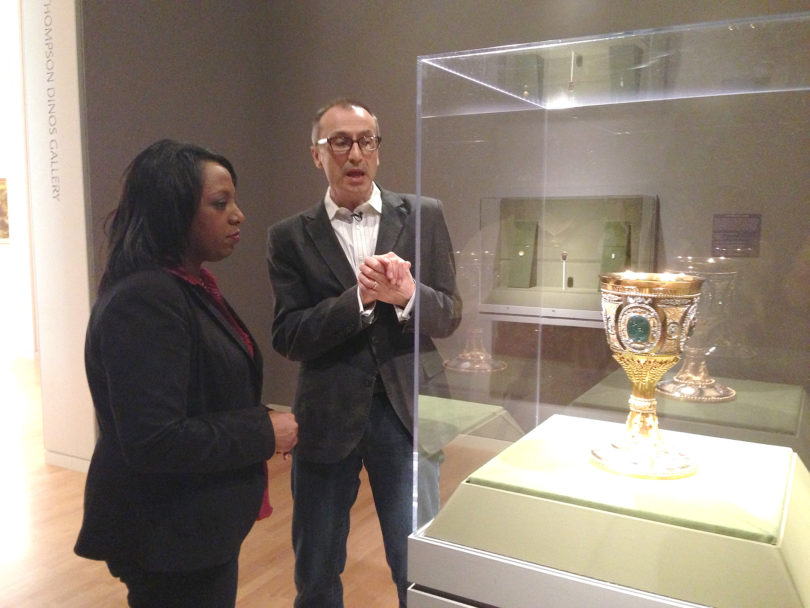 Alexia Ridley (left) looks at a chalice with Asen Kirin

The executive producer, writer and director of the one-hour documentary was Melissa Jackson of WUGA-TV. It was initially broadcast in December on the University of Georgia station. It showcased an exhibition on Russian art at the Georgia Museum of Art. In the program, “Two Powerful Women: The Collectors of Russian Art,” WUGA-TV news anchor Alexia Ridley guides viewers through works of decorative art that were once commissioned for Catherine the Great’s use or given as gifts in her court. The exhibition features pieces purchased in Russia in the 1930s by Marjorie Merriweather Post, the sole heir to the multimillion-dollar Post Cereal Company. Post’s purchases formed Hillwood’s Russian collection.

The documentary also captures music performed at UGA’s Performing Arts Center that was once played in the court of Catherine the Great and reveals how she used music to move her political and artistic ambitions forward in the 1700s.

This year’s Telly competition involved nearly 12,000 entries from all 50 states and numerous countries. The Telly Awards was founded in 1979 and is the premier award honoring outstanding local, regional and cable TV commercials and programs, the finest video and film productions, and online commercials, video and films. Winners represent the best work of the most respected advertising agencies, production companies, television stations, cable operators, and corporate video departments in the world.

A judging panel of over 500 accomplished industry professionals, each a past winner of a Silver Telly and a member of The Silver Telly Council, judged the competition, upholding the historical standard of excellence that Telly represents. The Silver Council evaluated entries to recognize distinction in creative work-entries do not compete against each other-rather entries are judged against a high standard of merit.