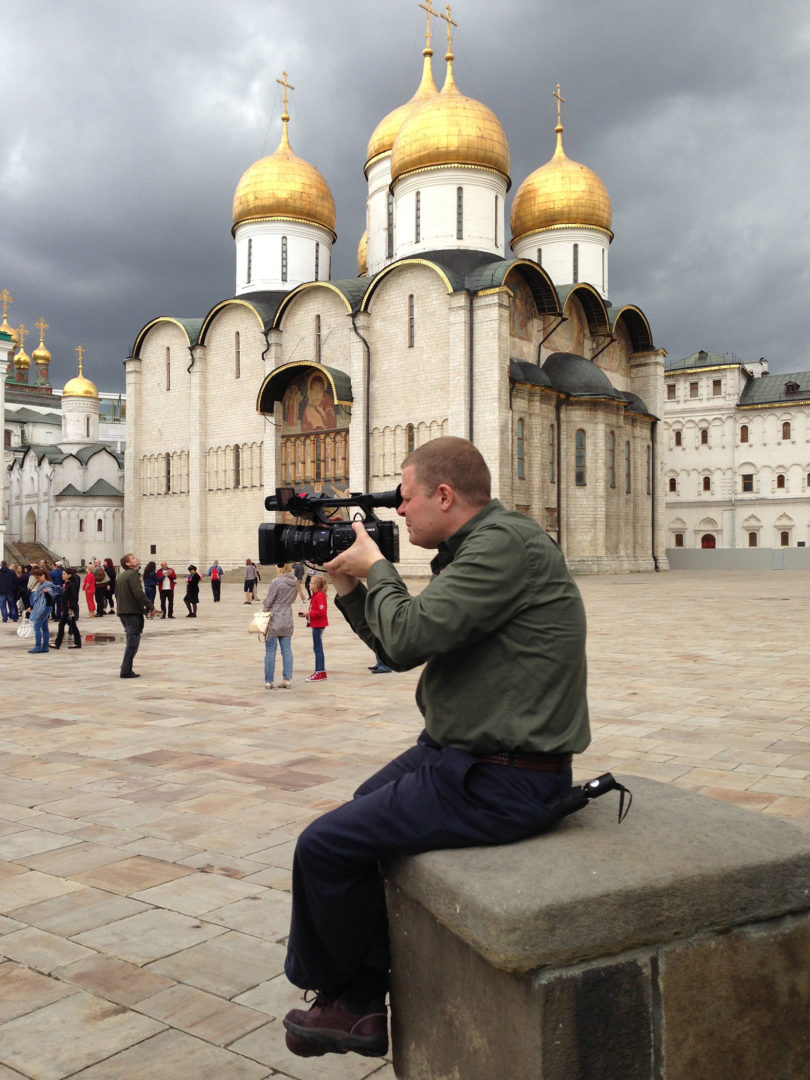 Videographer Stuart Grimes films near the Kremlin in Russia.

Athens, Ga. – WUGA-TV, the public television station owned and operated by the University of Georgia, will broadcast “Music for the Tsars,” a 90-minute documentary about bringing historic band marches re-discovered in a Russian archive to the UGA campus. The documentary will air beginning June 27 at 8 p.m. An hour of Russian related music will precede the documentary and air at 7 p.m.

WUGA-TV’s cameras follow George Foreman, director of UGA’s Performing Arts Center; John Lynch, who at the time was UGA Director of Bands; and three UGA graduate students-Curran Prendergast, Rickey Badua and Blake Unger-on a trip to Moscow and St. Petersburg, Russia as they uncover a set of band marches, once performed for the Russian tsars. The group then brought the music, thought never to have been performed outside of Russia, to the UGA campus to be performed.

The UGA group traveled to St. Petersburg to study the manuscript scores of three marches written by the Italian composer Gioachino Rossini. Rossini composed the marches in honor of Tsar Nicholas I in the early 1800s. UGA graduate students then edited and prepared the marches to be performed using modern instruments. The UGA Wind Ensemble performed the rediscovered music in a concert on campus in fall 2013. Portions of that performance are included in “Music for the Tsars.”

The WUGA-TV broadcast of “Music for the Tsars” was videotaped against the backdrop of Red Square, St. Basil’s Cathedral, the Hermitage and other historical sites.

Additional broadcast dates and times are available at wugatv.org.

Melissa Jackson was the executive producer-writer for documentary. Underwriting support for “Music for the Tsars” was provided by the University of Georgia President’s Venture Fund, the UGA Graduate School, the Franklin College of Arts and Sciences and the Performing Arts Center at UGA. Additional production support was provided by LifeSprings Media.

WUGA-TV is operated by the University of Georgia through a partnership with Georgia Public Broadcasting.