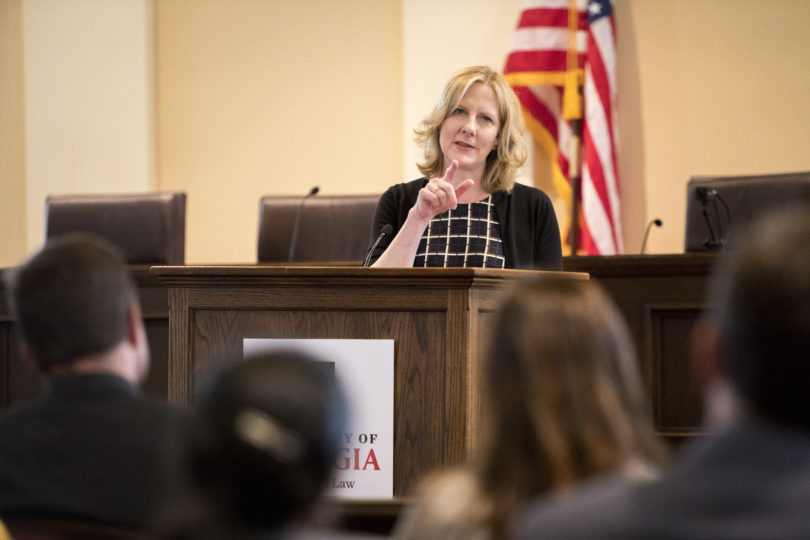 Heather Gerken knows that the legal profession has a tainted reputation among the public. Still, she believes lawyers are an honorable, critical aspect of democracy, politics and upholding the law.

Gerken, who is dean at the Yale University Law School, delivered the university’s 116th John A. Sibley Lecture—and final spring 2018 Signature Lecture—April 13 in the Hatton Lovejoy Courtroom of Hirsch Hall.

There, she defended the honor of the legal profession and argued that lawyers are defenders of the rule of law who fight with integrity and ensure that everyone has the right to be heard.

“People look to lawyers, and they see an industry of arguments for hire—a guild of professionals willing to promote any and all causes as long as the price is right,” said Gerken, who also is Yale’s Sol and Lillian Goldman Professor of Law. “But this is not an accurate picture of what we do.”

Instead, she believes lawyers stand up for what is most important, including the rule of law.

“If you want proof of the important role that lawyers play in defending the rule of law, you just need to read the newspaper. Look at what is happening in Egypt, in Pakistan, in Guatemala, in France and Turkey,” Gerken said. “When countries slide into authoritarianism, you will always see lawyers. You will see those lawyers standing up for voting rights, for due process, for integrity and government, and for equality under the law.”

According to Gerken, lawyers are trained to see the flaws in both their arguments and their opposer’s arguments.

“The day that you become a lawyer is the day that you realize the law does not and should not mirror every single thing that you believe as a person,” Gerken said. “We must recognize the best in the other side and the worst in our own. That’s what it means to be a lawyer.”