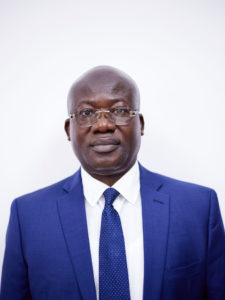 Eric Yirenkyi Danquah, founder and director of the West Africa Centre for Crop Improvement at the University of Ghana, will give the keynote address for the eighth annual International Agriculture Day celebration on April 17.

Hosted by the Office of Global Programs in the College of Agricultural and Environmental Sciences, the event and reception are open free to the public. The event will be held from 3:30-5:30 p.m. at the Georgia Museum of Art.

Danquah, a professor of plant genetics and the director of the Biotechnology Centre at the University of Ghana, founded WACCI in 2007 to train plant breeders to develop improved varieties of the indigenous crops of West and Central Africa. His talk will focus on the role WACCI has played in transforming agriculture in the area and the need to modernize African higher education to train students to solve local food-security problems.

According the WACCI website, Africa’s hungry and malnourished population has more than tripled in the past 35 years and now numbers more than 214 million. Because many of the plants grown in sub-Saharan Africa—such as cassava, cocoyam, taro, bambara and cowpea—are of little importance to researchers in the developed world, the majority of crops grown by farmers are unimproved, low-yielding varieties.

WACCI is a partnership between the University of Ghana and Cornell University and was originally established with funding from the Alliance for a Green Revolution in Africa. It has received additional funding from the U.S. Agency for International Development, the Generation Challenge Program and the German Academic Exchange Service. It also has been recognized by the World Bank as one of 22 Africa Centres of Excellence.

Since its inception, WACCI has enrolled 128 Ph.D. students from 19 African countries. Students learn both classical plant breeding and the complementary molecular biology technologies needed for efficient development of superior and adaptable crops, Danquah said. Sixty-six of those students have graduated and are now leading plant-breeding programs in national agricultural research institutions
in Africa, he said.

Four years ago, Danquah established a master’s program in seed science and technology that has attracted nearly 50 students. Under his leadership, WACCI has released three improved maize hybrids for commercialization in Ghana.

“The WACCI program is training the next generation of plant scientists from Africa,” said Danquah.

He noted that African students bring their expertise back to their home countries when they complete their degrees, counteracting the “brain drain” many rural areas experience when students do not return home after their studies.

The reception will feature refreshments by Dondero’s and music by Dan Nettles.

For more information on International Agriculture Day and the CAES Office of Global Programs, visit http://www.global.uga.edu/InternationalAgricultureDay/index.html.