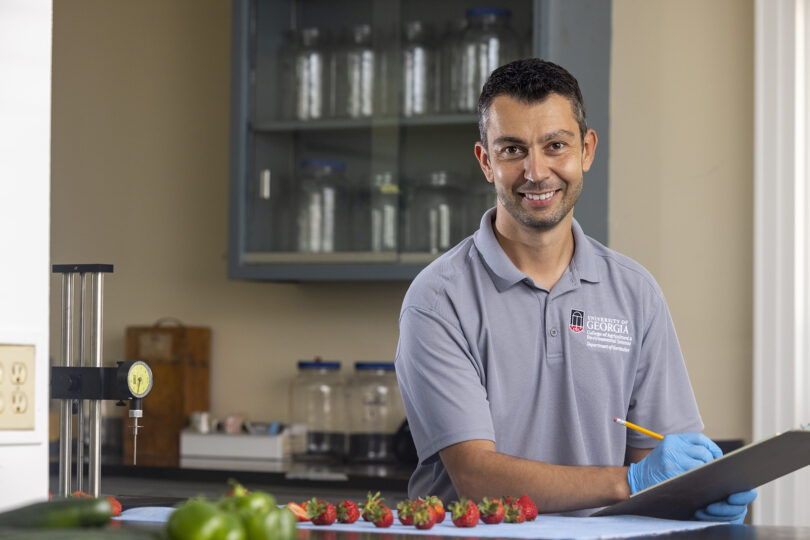 Angelos Deltsidis is an assistant professor with the College of Agricultural and Environmental Sciences' horticulture department. (Photo by Dorothy Kozlowski/UGA)

Angelos Deltsidis researches what happens after the harvest

When Angelos Deltsidis isn’t in the lab or in the field, he can usually be found on the road or trail, putting in miles on a long run through nature. But his runs aren’t simply spent enjoying the greenery—he is also focusing on what the plants produce, how they do it and gathering research ideas. He is finding inspiration.

Deltsidis, an assistant professor with the horticulture department in the College of Agricultural and Environmental Sciences, researches postharvest physiology—studying the effects of treatments and practices after the harvest of a fruit, vegetable or nut. His jurisdiction begins when this produce is removed from the mother plant, only ending at the time of cooking or consumption. While the details of his field are intricate, the goal is simple.

“Everything we consume, everything we have in our fridge, is still alive. It doesn’t die when you cut it from the mother plant. Our goal as postharvest scientists is to extend the shelf life, or postharvest life, as much as possible and to reduce the possible disorders that can occur that would reduce the quality of the product,” Deltsidis said.

Deltsidis notes that if it weren’t for postharvest physiologists, the Northern Hemisphere wouldn’t have access to many types of fresh produce, from bananas to apples, nearly year-round. 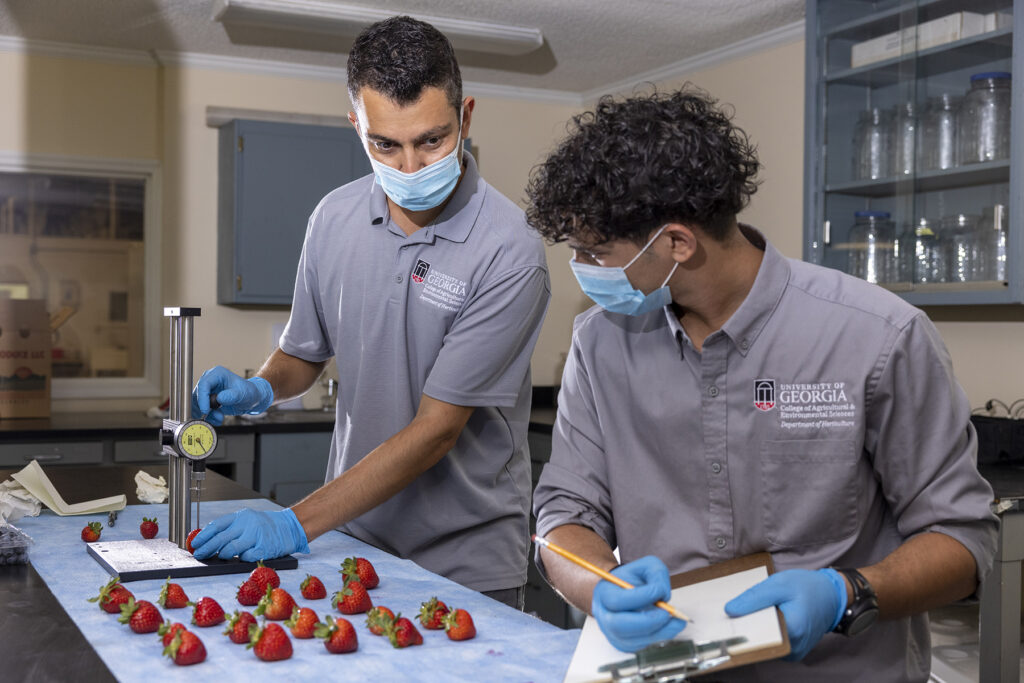 Angelos Deltsides, left, and graduate student Orestis Giannopoulos use a penetrometer to measure firmness in fruit. (Photo by Dorothy Kozlowski/UGA)

While completing undergraduate studies at the University of Thessaly in his native Greece, Deltsidis knew he needed to choose a specialization. One morning, while passing by the office of a professor he was interested in working with, he noticed an announcement about a new training and research collaboration between the European Union and the U.S. that included the opportunity to spend a semester at an American university. Despite the newness of the program and being the youngest volunteer, Deltsidis and a friend jumped at the prospect.

He was accepted into the program and landed at the University of Florida, where he spent time learning in the classroom and participating in research projects. Once back in Greece and awaiting graduation, the same professor approached him, inquiring about his post-graduation plans. This conversation led him back to the University of Florida for his doctorate, where he studied the effects of low temperature storage, as well as controlled and modified atmosphere storage and their effect on the quality of tomatoes, under professor Jeff Brecht.

After earning his doctorate, Deltsidis joined the U.S. Agency for International Development-funded Horticulture Innovation Lab at University of California, Davis, managing and executing projects on postharvest losses in developing countries around the world. This role led to work in a number of countries, with primary projects implemented in Bangladesh, Tanzania and Guinea. During his tenure at UC Davis, he also worked as associate director of the university’s Postharvest Center for about a year. At the center, specialists with postharvest research provide extension materials and trainings for the industry and anyone interested in learning more about postharvest physiology.

‘How about we waste less?’

In 2019, Deltsidis joined the faculty at UGA where he has continued the work he started as an undergraduate. He is currently running a postharvest project studying the effects of employing controlled atmospheres on the shelf life of pecans while planning upcoming projects involving peaches, leafy greens, broccoli, bell peppers and onions from the state’s Vidalia onion-growing region. He’s also interested in projects that test shipping conditions and the impact on product quality.

“I like that we are not trying to produce more—to increase the yield of a particular commodity or crop—but trying to save more of the product that is already out there in the field that doesn’t make it to the table of the consumer,” Deltsidis said.

Working to address issues in the value-chain process by finding new ways to improve harvesting, packing and transportation processes draws Deltsidis back to the lab and field every day.

“We’re not putting more strain on the environment by fertilizing more, by watering more—we are just trying to save the products that would otherwise go into the landfill,” he added. “By doing that, we help the consumer get a better-quality product with more product available and we give the producer more income because they are able to sell more of what they have already produced. We ask ourselves: How can we better use what the plant has already given us?”