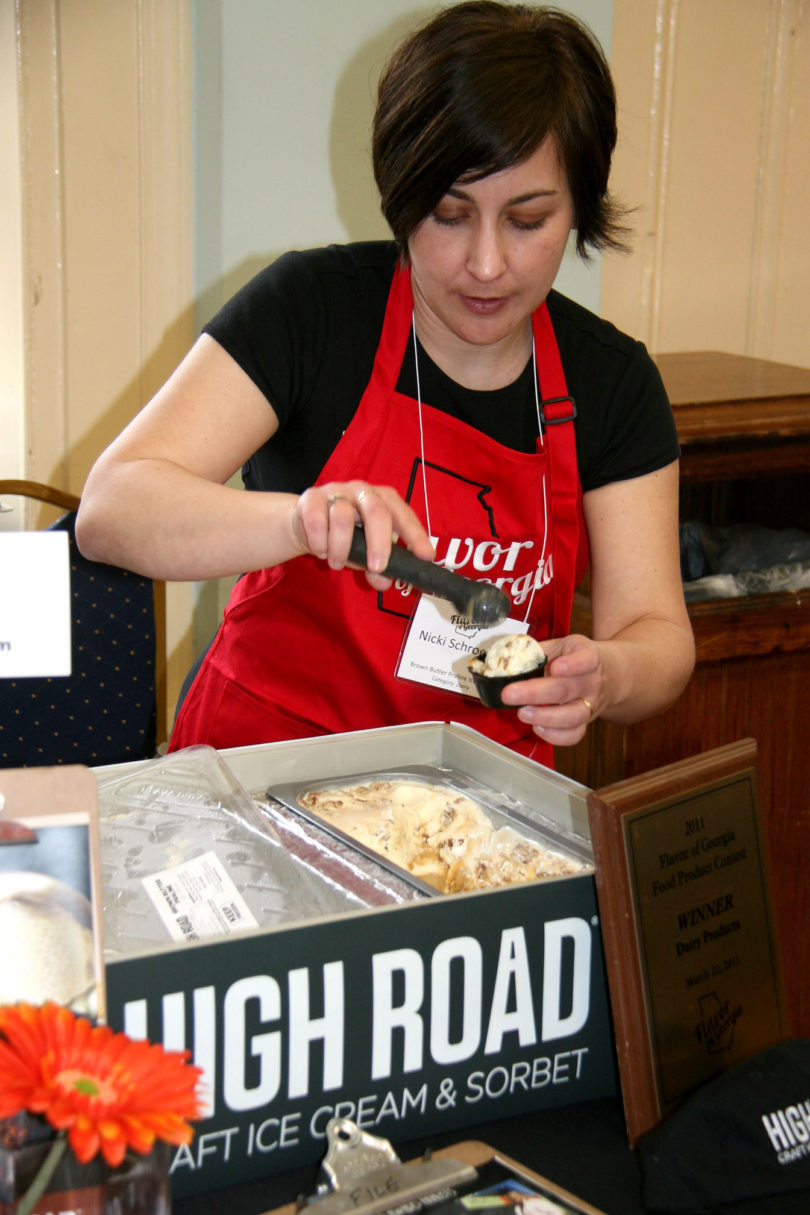 Atlanta, Ga. – High Road Craft Ice Cream of Atlanta was selected as the grand champion of the 2012 Flavor of Georgia Food Product Contest hosted annually by the University of Georgia.

Georgia Gov. Nathan Deal and Agriculture Commissioner Gary Black were on hand to announce the winners March 13 as part of Georgia Agriculture Awareness Day at the Georgia Freight Depot in downtown Atlanta. The contest, conducted by the UGA Center for Agribusiness and Economic Development, is a chance for food businesses to showcase their new products.

“Flavor of Georgia is a unique opportunity for entrepreneurs to gain publicity and exposure for their products,” said Sharon P. Kane, a food business development specialist with the center. “It’s also a chance for them to network with other food entrepreneurs and industry experts.”

High Road’s brown butter praline ice cream was one of 25 products sampled and judged by a panel of food brokers, buyers and other food industry experts. In addition to winning the overall grand champion, High Road Craft Ice Cream took home first place in the competition’s dairy category. Their caffeine and cacao ice cream received top honors in the dairy division in 2011.

Husband and wife team Nicki and Keith Schroeder have been producing their small-batch ice creams since April 2010. Their products are featured at Whole Foods markets throughout the Southeast and will be in Fresh Market stores nationwide in April.

The Schroeders both feel the Flavor of Georgia competition is the ideal place to field-test new flavors before they go to market. “It’s really a good way to get feedback,” Keith Schroeder said. “You get young and old, rural and urban here in the same place. You don’t see that very often, and it’s important because different people have different tastes.”

High Road Craft Ice Cream and 24 other finalists were chosen from about 115 entries from all across Georgia.

An army of food industry experts—including chefs, grocery buyers, food service personnel and agricultural marketing executives—rated the products based on qualities like innovation, use of Georgia theme, market potential and flavor, according to Jim Daniels, a food business development specialist in the Center for Agribusiness and Economic Development.

“Everybody has been saying this is the best one so far,” said Daniels, who has been responsible for tallying the Flavor of Georgia scores for several years. “I can tell from the results. All the scores were pretty close. There wasn’t a large spread.”

Brent Demarest, a 2012 Flavor of Georgia competition judge and a produce purchaser for Whole Foods, enjoyed most of the products he sampled Monday.

“It can be difficult for a small producer just starting out to get a distributor or to have the contacts they need to sit down with someone at a store like Whole Foods,” Demarest said.

Showcase events like the 2012 Flavor of Georgia competition help entrepreneurs get the word out about their products. The events also give retailers the chance to find quality local products their customers are starting to demand.

“There is a big push for local food right now,” Demarest said. “People are very interested in knowing what they are eating, knowing where it came from and how far it traveled and knowing that their money is staying their community.”

Winners and finalists earn the right to have their products stamped with the 2012 Flavor of Georgia logo.

Flavor of Georgia is only a starting point for many of the category winners, Kane said. She followed up with the 2011 winners and found that between 70 and 80 percent experienced increased interest in their products, sales and business contacts as a result of the contest.