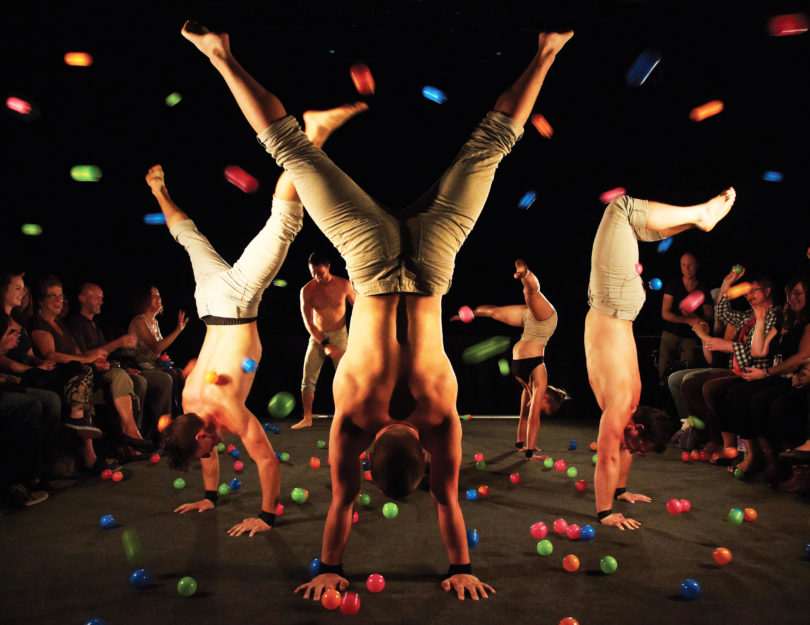 UGA Presents is bringing Australia’s Gravity & Other Myths to Athens Jan. 10 for a 7:30 p.m. show in Hodgson Concert Hall. The acrobatic ensemble will perform its internationally acclaimed work entitled “A Simple Space.”

Formed in 2009 in Adelaide, South Australia, Gravity & Other Myths is an award-winning troupe that has toured extensively throughout the world. The company eschews traditional circus models in favor of a more dynamic and raw acrobatic physical theater that directly connects the performers with the audience. The acrobats are accompanied by an onstage musician providing a high-energy soundtrack.

In the program notes for the show, Gravity & Other Myths states: “You will immediately see that “A Simple Space” is exactly what we have, stripped of anything that separates us from our audience. In this stripped back state we as performers have nothing to hide behind and our true stories and connection seep through. It’s a terrifying and liberating way to perform!”

“A Simple Space” premiered at the Adelaide Fringe and Edinburgh Fringe festivals in 2013 and has now toured to 14 countries on six continents. The production has won a multitude of awards including Zurich’s 2016 Theater Spektakel Audience Prize, the 2015 Australian Dance Award for Best Physical Theatre and Best Circus at Adelaide Fringe 2014.

Tickets for “A Simple Space” can be purchased at the Performing Arts Center box office, online at pac.uga.edu or by calling 706-542-4400. Tickets start at $30 with a limited number of stage seats available for $20. Discounted tickets are available to current UGA students for $10 with a valid UGA ID (limit one ticket per student).

The performance is sponsored by Dr. Maxine and John Rofrano.