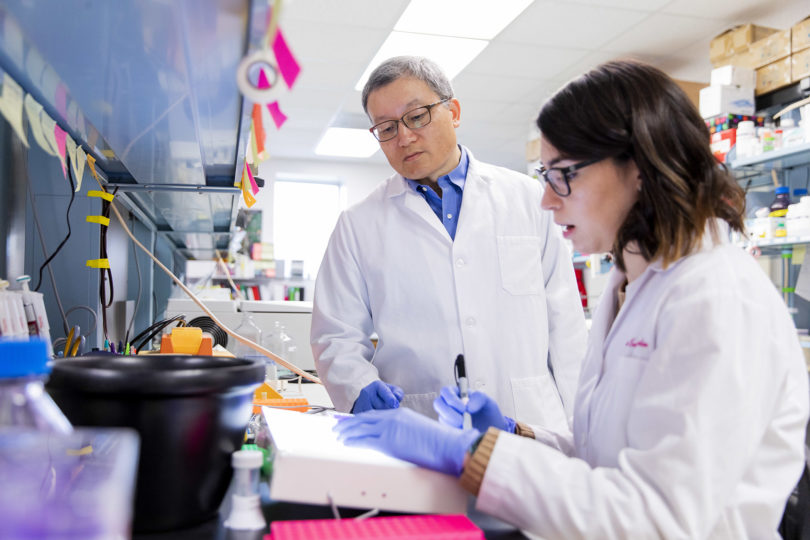 Professor Biao He works with Ph.D. student Maria Huertas-Diaz in his lab at the College of Veterinary Medicine. (Photo by Andrew Davis Tucker/UGA taken in February 2020)

A team of researchers at the University of Georgia College of Veterinary Medicine has developed a COVID-19 vaccine candidate that has proven successful in promoting an immune response in early test models.

The team is led by Biao He, the Fred C. Davison Distinguished University Chair in Veterinary Medicine at UGA, and Drs. Stanley Perlman and Paul McCray of the University of Iowa department of microbiology and immunology. Together, they developed a promising vaccine for MERS-CoV, the coronavirus that causes Middle East Respiratory Syndrome, and quickly pivoted their research to focus on SARS-CoV-2.

The MERS vaccine, detailed in a study published in mBio, successfully promoted immunity to the disease in lab studies, giving the researchers high hopes for the COVID-19 vaccine.

The vaccines are based on a viral delivery platform developed by He containing modified strains of the virus that cause kennel cough in dogs, parainfluenza virus 5 (PIV5). The modified viruses produce proteins found in the two coronaviruses, specifically the spike proteins that form the “crown” or corona for which they are named. After the vaccine has been administered, cells are infected with the PIV5 virus. The body then begins to mount a defense to the MERS spike proteins produced by the modified virus—ultimately promoting an immunity to infection.

He has focused his attention on this virus for years due to its safety in humans. “When your dog is immunized against kennel cough, a similar vaccine is used,” explained He. “After immunization, the dog will shed this PIV5 for days. If you have a dog, you have been safely exposed to this virus many times.”

While vaccine development is still in the early stages, the researchers hope that it will be successful in further tests. He hopes that the SARS-CoV-2 vaccine will be ready for FDA approval by the end of  the year.

“We have an opportunity now to use our technology to help people,” He said. “And, at the University of Georgia, we have the people, and we have the facilities. We have been able to  quickly mobilize resources to develop this vaccine.”