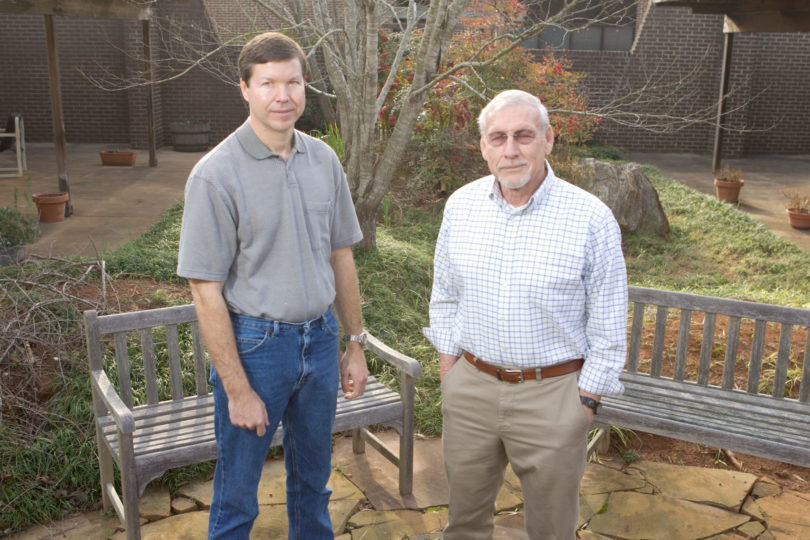 Scott Noakes (left) and John Noakes of UGA's Center for Applied Isotope Studies teamed up with the Instrument Shop to develop the innovative recovery system.

During March-which traditionally comes in like the proverbial lion, bringing cold, windy and irritable weather-a trip to the beach sounds better all the time. And it’s sounding good to more people every year.

“Coastal regions have been experiencing rapid population growth for decades,” says Scott Noakes, an assistant research scientist at UGA’s Center for Applied Isotope Studies. “But as urban and industrial development takes a toll on the ‘buffer zone’ between the shore and the more open water of the ocean shelf, we need to monitor the impact of these changes on the organisms and sediments of the coastal environment.”

CAIS has conducted marine environmental surveys for years, but the center recently added a twist to its marine research.

“There are former bombing ranges in the U.S. and throughout the world where practice ordnance-explosives dropped during training exercises-did not detonate upon delivery and are still lying on the ocean floor,” says John Noakes, director of CAIS. Unexploded ordnance, or UXO, present a serious hazard to divers and ships and may corrode over time, releasing contaminants into the water. Because the detonation device on a dropped bomb has been triggered, handling UXO is more perilous than dealing with unarmed explosives which were never intended to detonate.

Through a privately funded grant, CAIS was asked to develop a system to remotely recover UXO. Up to this point, alleviating the threat necessitated divers manually attaching either harnesses or additional explosives to the submerged bombs and then either towing them away or blowing them up on location.

CAIS teamed up with the UGA Instrument Shop to develop the innovative system.

“The shop’s motto is ‘We can build anything,’ and that’s the truth,” says John Noakes.

Using a robotic arm originally designed to pick up and move large logs as a model, the team designed an aquatic claw equipped with a camera, hydraulic power pack and radio transmitter that broadcasts signals to the control center.

“Once the system is positioned on the sea floor, the surface vessel moves to a safe distance-usually at least 600 feet away,” says John Noakes.

Radio waves transmit video and hydraulic signals to a command center in a surface vessel, where an operator uses a control chair equipped with two color monitors to manipulate the robotic arm and grab the UXO. The arm can collect objects up to 30 feet away in any direction, and once an area has been cleared of UXO, the device can be repositioned and the process started over again.

But picking up the UXO is only half the problem. Getting it off the sea floor and transporting it somewhere else for disposal is equally important. To achieve this, the design team outfitted a retrieval basket with two scuba cylinders and a large aluminum float that can be filled with water to submerge the basket. Once the basket-which can hold up to 1,000 pounds-is full, the water in the float is replaced with air, and the device rises to the surface where it can be towed away.

The team and its sponsor field-tested the floatation system in UGA’s marine science test tank and training pool, then traveled to a limestone quarry in Key West, Fla. Working with divers and a shore-based crane, the team positioned the recovery system and two 500 pound “training shapes” on the ocean floor. Team personnel manned the onshore control center and successfully retrieved both 500 pound training shapes without the aid of divers.

“This is an exciting new technology because it offers a safe, realistic way to clean up former military bombing ranges and an environmentally sound method for dealing with UXO,” says John Noakes. “In the past it’s been so dangerous to even consider UXO removal making comprehensive cleanup efforts nearly impossible.”