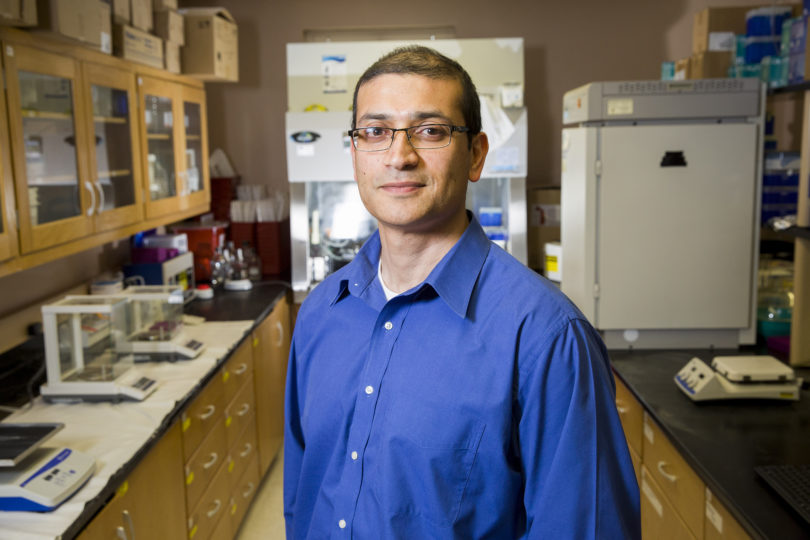 Hydrogel mimics the composition and mechanics of the brain.

For an update to this story, visit Brain Glue, Part 2

Researchers at the University of Georgia’s Regenerative Bioscience Center have developed Brain Glue, a substance that could one day serve as a treatment for traumatic brain injuries, or TBIs.

The Brain Glue is a hydrogel matrix with a gelatin-like consistency that acts as a scaffolding for transplanted stem cells, which are capable of repairing damaged tissue. With the unique ability to take the shape of the void left in the brain after a severe trauma, the Brain Glue will enable a more natural healing environment for stem cells to colonize and regenerate.

Lohitash Karumbaiah, assistant professor in UGA’s College of Agricultural and Environmental Sciences, led the team that designed and created Brain Glue. The main difference between Brain Glue and other synthetic hydrogels, according to the team, is the variety of possibilities to trap neural stem cells, improve integration and reduce the likelihood of rejection.

“It’s very common with these invasive injuries that surgeons will actually remove the part of the dead brain leaving behind a cavity or hole,” said Karumbaiah. “The question is, then, can you replace that with something like our Brain Glue, loaded up with compounds native to the brain together with a mix of protective agents that can be incorporated for the best therapeutic outcome.

“The cool thing about this chemistry is that you can take our Brain Glue liquid formulation and then very briefly expose it to long-wave UV light and form a hydrogel in any shape you like,” he said.

Every day, 153 people in the U.S. die from injuries that include TBI, according to the Centers for Disease Control and Prevention. Those who survive a TBI may live with impaired thinking, memory, movement or sensation. TBIs can also lead to personality and emotional changes.

The new approach is described in the journal ACS Biomaterials Science and Engineering and a recently awarded abstract from the International Brain Injury Association.

For more than two years now, Karumbaiah has been awarded seed-funding for his collaborative TBI work with Maysam Ghovanloo, associate professor of electrical and computer engineering at the Georgia Institute of Technology. The TBI research was initially funded by the Center for Regenerative Engineering & Medicine, known as REM, a collaborative initiative launched in 2011 between the University of Georgia, Emory University and the Georgia Institute of Technology.

The REM collaboration is an extension of Karumbaiah’s work to further study neuroplasticity: the brain’s ability to self-renew, adapt and compensate for injury and disease. His future studies will focus on how neural networks form and change in response to traumatic insults, and he will investigate the therapeutic use of electrical stimulation to help return loss of function in any given region of the brain.

“Multiple methods are needed in these kinds of studies,” said Karumbaiah. “The Brain Glue is where we make the scaffold, and the neuro-network function is really this other arm — learning how neurons fire and wire together and what this really means in terms of function.”

Steven Stice, director of the Regenerative Bioscience Center, is working with Karumbaiah on a licensed technology for commercialization of the new Brain Glue, which was recently named best abstract at a meeting of the International Brain Injury Association.

“Lohitash sets an example for other junior faculty to emulate,” said Stice, GRA Eminent Scholar and D.W. Brooks Professor in CAES. “To be recognized internationally at such an early stage takes great skill and dedication.”

A full version of ACS Biomaterials Science article is available online at http://pubs.acs.org/doi/pdf/10.1021/acsbiomaterials.6b00805

The Regenerative Bioscience Center at the University of Georgia links researchers and resources collaborating in a wide range of disciplines to develop new cures for devastating diseases that affect animals and people. With its potential restorative powers, regenerative medicine could offer new ways of treating diseases for which there are currently no treatments-including heart disease, Parkinson’s, Alzheimer’s and stroke. For more information, see www.rbc.uga.edu.