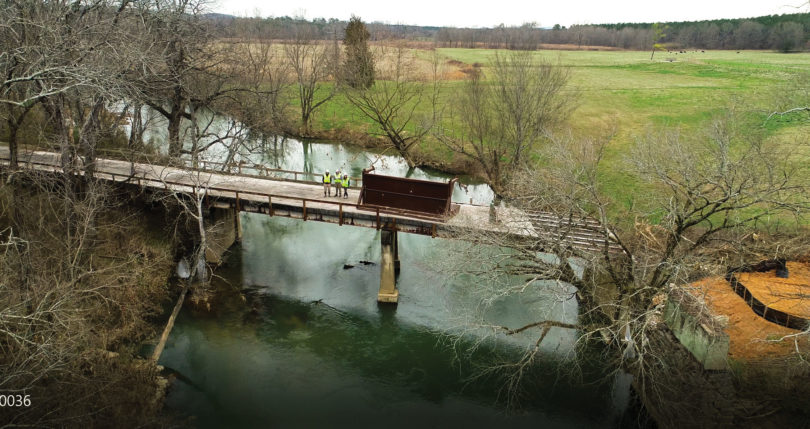 Repairing aging infrastructure, particularly bridges, presents an environmental hazard: disturbing the natural flow of the water and the habitats of the creatures that live there. Those are just some of the considerations on the minds of University of Georgia graduate students William Mattison, Daniel Buhr, and Devan Fitzpatrick as they survey a construction site where Taliaferro Springs Road crosses the Chattooga River in northwest Georgia. (Photo by Daniel Buhr)

The multidisciplinary Institute for Resilient Infrastructure Systems is seeking innovative solutions to state and national problems ranging from flood control to sanitation.

America has a problem.

Its infrastructure is overwhelmed, with much of it susceptible to natural disasters and even typical weather events. Sea-level rise and an increase in the number of extreme storms certainly aren’t helping matters. Couple that with a dramatic rise in population and urbanization over the past 50 years, and you’re almost asking for a massive, nationwide system failure. 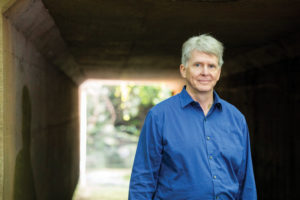 “Conventional engineering has done and continues to do great things. But it’s had some not so great consequences that have left us vulnerable. Nature-based solutions need to play a lot more prominent role, working together with conventional infrastructure.” — Brian Bledsoe, Georgia Athletic Association Distinguished Professor in the College of Engineering. (Photo by Dorothy Kozlowski/UGA)

“Conventional engineering has done and continues to do great things,” says Brian Bledsoe, Georgia Athletic Association Distinguished Professor in UGA’s College of Engineering. “But it’s had some not so great consequences that have left us vulnerable. Nature-based solutions need to play a lot more prominent role, working together with conventional infrastructure.”

That’s where the University of Georgia’s Institute for Resilient Infrastructure Systems, a center that draws from a dozen units across campus, comes in.

At two years old, the interdisciplinary institute better known as IRIS is hitting its stride, partnering with fellow universities, institutions, and local and federal government agencies to redesign infrastructure to be more cost-effective and environmentally friendly. As the director of the institute, Bledsoe is leading the charge.

“Infrastructure” refers to any engineered solution that supports or is essential to the basic functions of modern society, like bridges, roads, sewage systems, and levees. The goal is to make everyday life safer and easier for communities. And, for a while, the country’s infrastructure did just that.

But as the U.S. population grew, so did the acreage of impermeable surfaces, like parking lots and buildings, that can make an area more prone to flooding.

In March, Iowa was slammed by a “bomb cyclone” storm system that caused catastrophic flooding and infrastructure damage to the tune of $1.6 billion. Nearby Nebraska didn’t fare much better, ringing in at $1.3 billion in flood-related damage.

Closer to home, heavy rains in Atlanta caused tens of millions of gallons of raw sewage to overflow across Fulton County.

Many of the sewers in Atlanta and other cities across the nation built in the mid-20th century are combined sewers, which transport both storm- and wastewater to treatment plants. But the infrastructure often can’t keep up with 21st century rainfall. Built to overflow when water levels get too high, the sewers pour untreated sewage into surrounding surface waters.

Homeowners on the coast are watching the shoreline encroach closer and closer to their structures as sea levels continue to rise. And as groundwater levels continue to rise, residents are experiencing more frequent malfunctions of their septic systems, with raw sewage bubbling up in drainage fields that puts public health at risk.

Take, for example, a typical seawall or levee. Although built to withstand a lot of water, the structures often aren’t capable of holding back the unprecedented rainfall wrought by powerful storms like 2018’s Hurricane Florence and the previous year’s Harvey. “When the sea wall breaks, that’s it,” says Bledsoe. Homes are flooded, businesses crippled, lives ruined.

“We’re in a new normal climate of more intense or frequent extreme weather events. The 100-year flood is becoming common rather than an anomaly” says Marshall Shepherd, Georgia Athletic Association Distinguished Professor of and program director for UGA’s atmospheric sciences program. “The 2009 Atlanta Floods ‘500-year event,’ stalling hurricanes (as Harvey and Florence did), and rapid snowmelt (like this spring in Nebraska) are impacting society now, not far off into the future. How resilient are we to that risk? In this new era, do we need to be thinking about a more climate- or hydroclimate-resilient system?”

“Are those poultry and pig farms going to get flooded out every time a hurricane hits?” Shepherd asks. “That’s where I think an institute like IRIS comes in because we bring together scholarly expertise across the spectrum. I know about rain. Krista Capps (an assistant professor in the Odum School of Ecology and the Savannah River Ecology Lab) knows about sanitation and waste systems. Brian Bledsoe knows hydraulics. The brilliance of IRIS is that we can come together and think about the problem as a system to figure out how to solve it.” 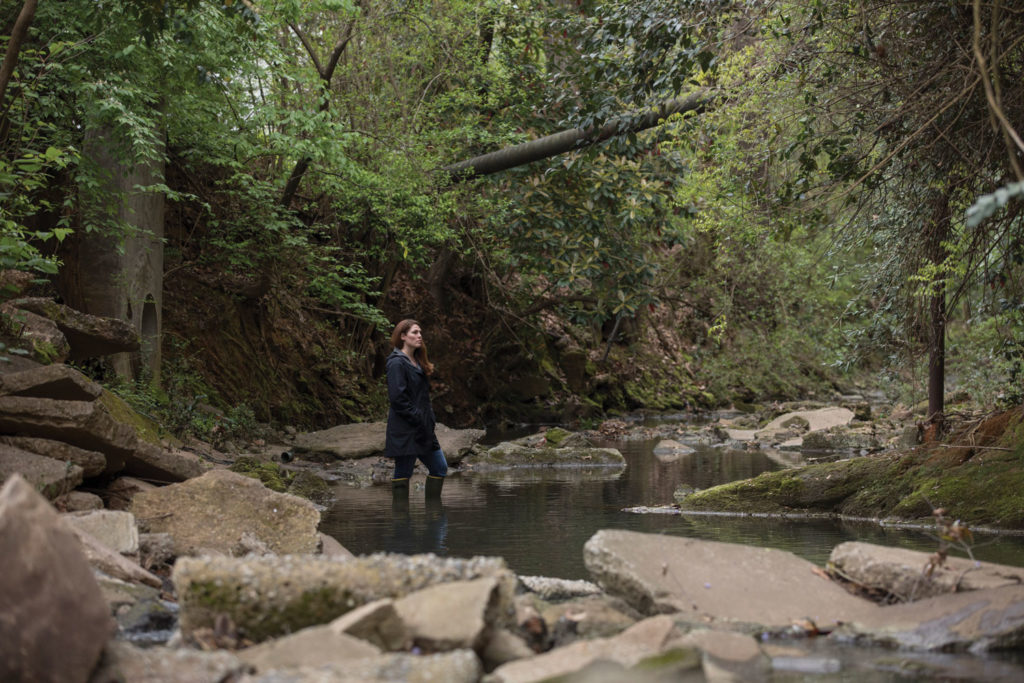 Solving problems, like how to incorporate green engineering principles into modern infrastructure, requires a wide array of expertise. In the Institute for Resilient Infrastructure Systems, aquatic ecologists like Krista Capps, engineers, climatologists, and more are working to find answers to today’s most pressing problems. (Photo by Peter Frey/UGA)

UGA’s Skidaway Island campus is ground zero for the university when it comes to experiencing rising sea levels and extreme storms firsthand. Over the past 83 years, sea level has risen more than 10 inches at the National Oceanic and Atmospheric Administration’s (NOAA) Fort Pulaski tide gauge, about 8 miles north of Skidaway. Scientists expect waters to rise by at least 6 inches in the next 50 years.

Skidaway Island is nestled right along the intracoastal waterway, with UGA’s campus backing up directly onto the marsh. Predictably, when Hurricane Matthew hit in 2016 and Irma the following year, some of the coastal campus flooded.

The island got lucky, though. The damage could’ve been much worse. 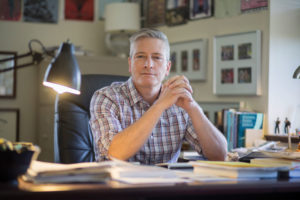 Craig Landry, a professor of agricultural and applied economics, is researching sea level rise and its effects on local communities. (Photo by Peter Frey/UGA)

Preparing for the next storm is top of mind for Clark Alexander, director of UGA’s Skidaway Institute of Oceanography. Partnering with Bledsoe and 13 other co-PIs from the Carl Vinson Institute of Government, Marine Extension and Georgia Sea Grant, and multiple colleges and departments across campus, lead PI Alexander received a Presidential Seed Grant in 2017 to determine ways to make the campus more resilient over time to rising seas and more intense storms. Resiliency for the island may look like a higher sea wall that protects the upland from rising waters. It may look like a shoreline protected with oysters to stop erosion and a raised bank with natural vegetation. Or maybe it lies somewhere in between: traditional infrastructure paired with natural structures to achieve an efficient and more eco-friendly
solution.

Craig Landry BSA ’96, MS ’99, a professor of agricultural and applied economics, is likewise focusing on sea level rise and its effects on local communities.

One pattern that stuck out to Landry and his IRIS colleagues is that bulkheads seemed to cluster together. Bulkheads are retaining walls that physically block water from eroding land but destroy coastal habitats in the process, particularly if there are multiple ones in the same area. After analyzing the issue, they found that one of the most influential reasons for building a bulkhead is if the property owner’s neighbors had one, with other factors such as erosion and distance to the shoreline playing a lesser role. Using their predictions, the IRIS researchers are able to predict where bulkheads will likely be built.

“These predictions can help us better understand where wetlands are most likely to become imperiled as they attempt to migrate inland in response to sea level rise,” Landry says.

Sea level rise also poses another less obvious but equally important risk in coastal areas: As waters rise, so do groundwater levels, and with that comes the prospect of failing septic systems.

One of the first problems that pops up when discussing what to do about potential septic overflow is that there’s no map showing where each and every septic tank is located. Some people may not even know they’re using septic. So UGA Marine Extension and Georgia Sea Grant, a Public Service and Outreach unit, began developing data sets with GIS (geographic information system) coordinates for each tank along the coast.

Once all the tanks are located, the question becomes what can be done to make sure these tanks don’t contaminate surface water.

“People take waste treatment for granted. It’s just something where you flush a toilet, and it disappears,” says Scott Pippin JD ’06, MEPD ’13, an attorney based in the Carl Vinson Institute of Government who specializes in environmental health and policy. He also serves as the NOAA-funded project’s PI. “Most people, particularly those in decision-making positions, don’t have any firsthand contact with problems like this.”

IRIS models future water table elevations under sea level rise to predict which septic systems are the most vulnerable. That’s where Pippin and his colleagues come in, teaching government officials how to use that research to prepare for impending problems.

But it’s not just coastal areas that are facing hazards. 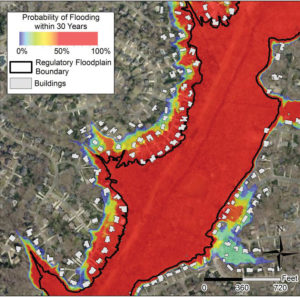 Heavy rainfall is causing countless rivers to breach their banks more frequently. National regulations require people living in floodplains to buy flood insurance, but the situation isn’t as simple as the black lines on a map would indicate (see left).

“You can see neighborhoods developed right along the boundary of that line. You’re either in the mapped floodplain or you’re not,” says Tim Stephens, a doctoral student in Bledsoe’s lab. Although those individuals wouldn’t legally be required to buy flood insurance, it doesn’t mean they’re actually in the clear. The Office of the Inspector General found that less than half of floodplain maps are accurate.

Working with colleagues at Princeton, the University of Arizona, and Northeastern University on the National Science Foundation-funded project, Bledsoe and Stephens are determining how best to present floodplain maps so that people will better understand the risks posed
by floods.

Infrastructure challenges in the face of extreme weather and rapid urbanization are complex but not impossible to solve. Known in the field as “wicked problems,” there are many actors invested in the outcomes, and there are a lot of interrelated, moving parts, says Capps. It takes experts in multiple fields to solve them. UGA’s variety of expertise in the sciences coupled with its research prowess uniquely positions the university to become a center of excellence for resilient infrastructure, engineering solutions that work with the ecosystem, not against it.

“We’re not a bunch of ivory tower academics here,” says Shepherd. “We are scientists who are trying to think about the end-to-end solutions that will make the lives of Georgians better.”

And with these just being a few of the projects IRIS researchers are working on, the institute is hitting the ground running. 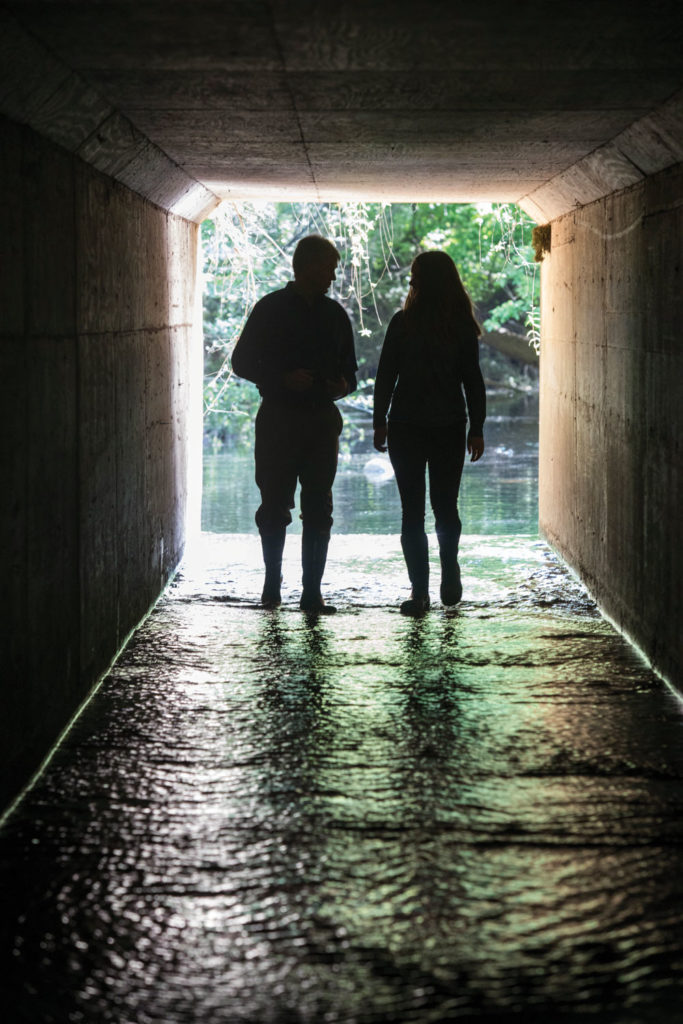 For more about IRIS, read about their collaboration with the Natural Infrastructure Initiative.