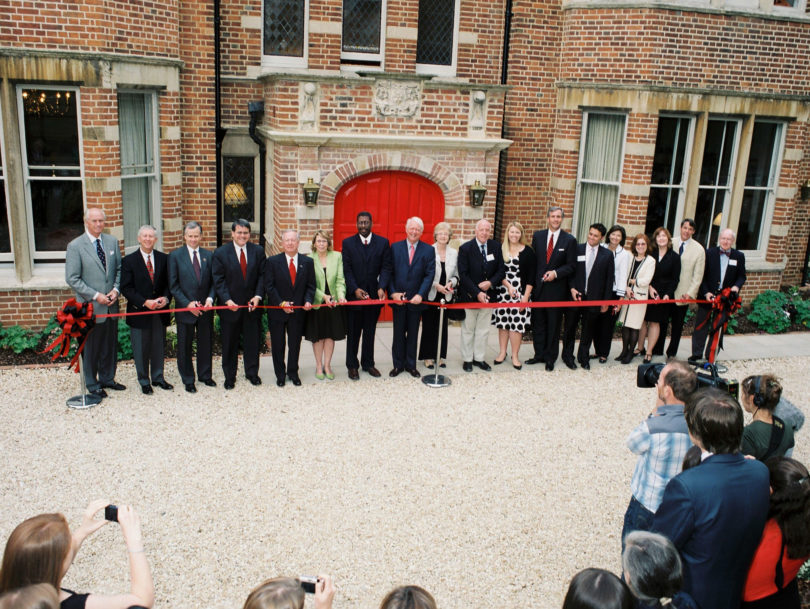 UGA's new Oxford Center was formally inaugurated with a ribbon-cutting ceremony on May 20 attended by President Michael F. Adams

“I am convinced that no single experience has a greater impact on a student than long-term residential study abroad,” said Adams, who toured the UGA at Oxford Center, currently occupied by UGA students and faculty participating in the Franklin College of Arts and Sciences spring semester and Foundation Fellows May term study-abroad programs. “Today, in the birthplace of the university, we celebrate what the 1785 charter for the University of Georgia has become-a truly international university, serving not just her home state but the nation and the world.”

Welcoming the assembled guests, Kalpen Trivedi, director of the UGA at Oxford Program, remarked on the significance of dedicating the new building on the eve of the program’s 20th anniversary in 2009, adding that almost 250 students will benefit annually from this facility.

Kristin Bernhard, a junior majoring in English and history and studying at the center this spring, also participated in the dedication ceremony.

Speaking of her study-abroad experience, Bernhard said, “The skills I have learned here will illuminate my academic career, and the experience is one I will never forget.”

UGA’s Oxford study-abroad programming has grown from 13 students in 1989 to 202 students in 2008, with five of UGA’s largest schools and colleges participating. In all, more than 30 academic majors and nearly 80 separate courses are represented.

“UGA is unique in having more than 100 faculty-lead study-abroad programs on every continent including Antarctica,” said Judith Shaw, the Oxford program’s first faculty director and the current associate provost for international education. “As President Adams has said in the past, the sun never sets on UGA.

“The state of international education at UGA in general and the Oxford program in particular has been one of growth, and student demand for the semester-long Oxford program continues to increase,” Shaw added. “In keeping with the university’s academic mission, the new Oxford Center facility provides a concrete example of an international vision of providing students the opportunity to expand their horizons, equipping them to live and work in an increasingly interconnected world.”

The newly refurbished UGA at Oxford Center is an imposing three-story Victorian brick mansion in the heart of north Oxford, whose academic traditions date back to the 11th century.

An estimated 150 people attended the ceremony and reception, including collaborative partners from Oxford University, Professor Dame Averil Cameron, warden of Keble College, and Sir Ivor Roberts, president of Trinity College. The British government was represented by the senior U.S. officer of the British Foreign and Commonwealth Office. Also present were representatives from the architectural firm of Berman Guedes Stretton and the Oxford-based contracting firm Benfield and Loxley.