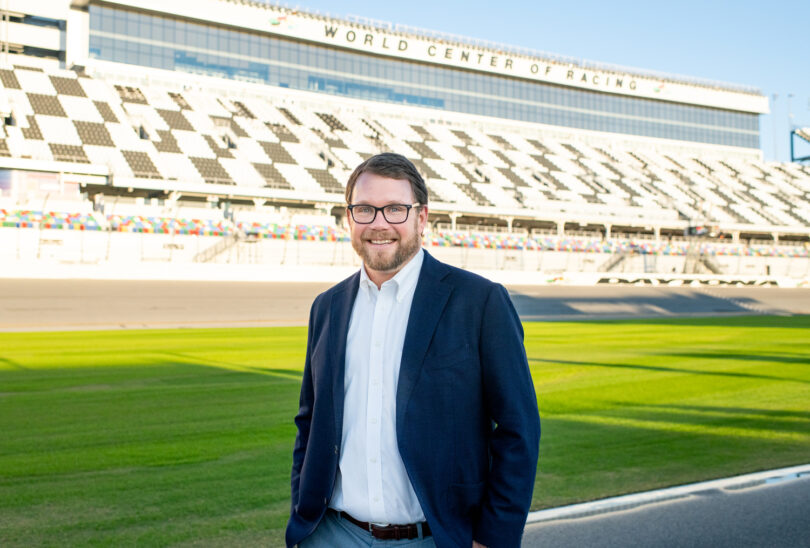 Chip Wile AB '02 has served as president of the Daytona International Speedway since 2016. The 2021 race is unlike any that have come before, and Wile's work has been instrumental in making sure the event is safe for the limited number of fans in attendance. (Photo by Meagan Scharmahorn)

On Sunday, Feb. 14, the Daytona 500 will take place in a world vastly different than the one that was run one year ago. The Daytona International Speedway, which normally seats 101,500, will include a fraction of that number. But the fact that fans will be in attendance at all is a triumph of smart planning, careful considerations, and hard work.

The logistics and safety precautions in place at the track—temperature checks and social distancing of fans, mask requirements, compartmentalizing of drivers and teams, frequent cleaning of public areas—are familiar to us now. But in the early days of the pandemic, small groups of people had to figure out a way forward.

One of those people was Chip Wile AB ’02.

As president of the Daytona International Speedway, one of the most iconic sports venues not just in the U.S. but the world, Wile sat at the planning table from the beginning.

“Just understanding the property is the first step,” says Wile, who learned even more about it during the shutdown. For instance, he mowed the Speedway’s vast infield since the staff offices were closed. “We had to figure out how to segment groups of fans. Even the campers.”

Wile himself put down more than 6,000 social distancing markers in the ramp-up to partial reopening last summer. The effort paid off, and on July 4, Daytona hosted 5,000 fans for the IMSA Weather Tech 240. The NASCAR Cup returned in August along with 20,000 fans, and the 2021 Daytona 500 marks another step forward.

Since then, Wile’s expertise has been in demand. He has briefed Florida’s governor multiple times. He spoke with NFL Commissioner Roger Goodell, who’d asked about how best to allow fans into the stadiums safely. It’s an interesting role to play for the humble native of Atlanta.

Wile was always a sports fan growing up but not necessarily of motorsports. That changed his junior year at UGA when he acquired an internship with a sports marketing firm that was specific to NASCAR. He quickly fell in love with the sport and the passionate fans and teams who made up the community. Immediately after graduating from UGA with a communications degree in 2002, Wile launched into a multifaceted career in racing team promotion and management. The idea of managing a racetrack didn’t come about until 2013.

Darlington Raceway in South Carolina opened in 1950 as NASCAR’s first paved superspeedway. So it holds a special place in the hearts of drivers and fans alike. Wile admits to a little bit of trepidation when NASCAR picked him at the age of 34 to run the track, but any concern evaporated when he started the job.

“The people in Darlington became my family,” he says. “I think the one thing I had to overcome was being a young guy in a really big role and having to prove yourself. You earn respect by never asking someone to do something you’re not willing to do yourself.”

After three years in Darlington, Wile moved from the track he calls NASCAR’s Fenway Park to the speedway widely regarded as its Sistine Chapel. At Darlington, he managed a staff of 15. At Daytona, the employees number more than 100. In a normal year, the speedway hosts more than 300 events ranging from proms, weddings, and high school graduations to the 24 Hours of Daytona.

Those events were understandably scaled back in 2020, but, like all of us, Wile is optimistic about the future.

“The past year has been a really tough year for us as a country,” Wile says. “And for us to be able to provide any sort of light or entertainment for folks, get them out of their house safely, and let them enjoy something they haven’t seen in a long time is really special.” 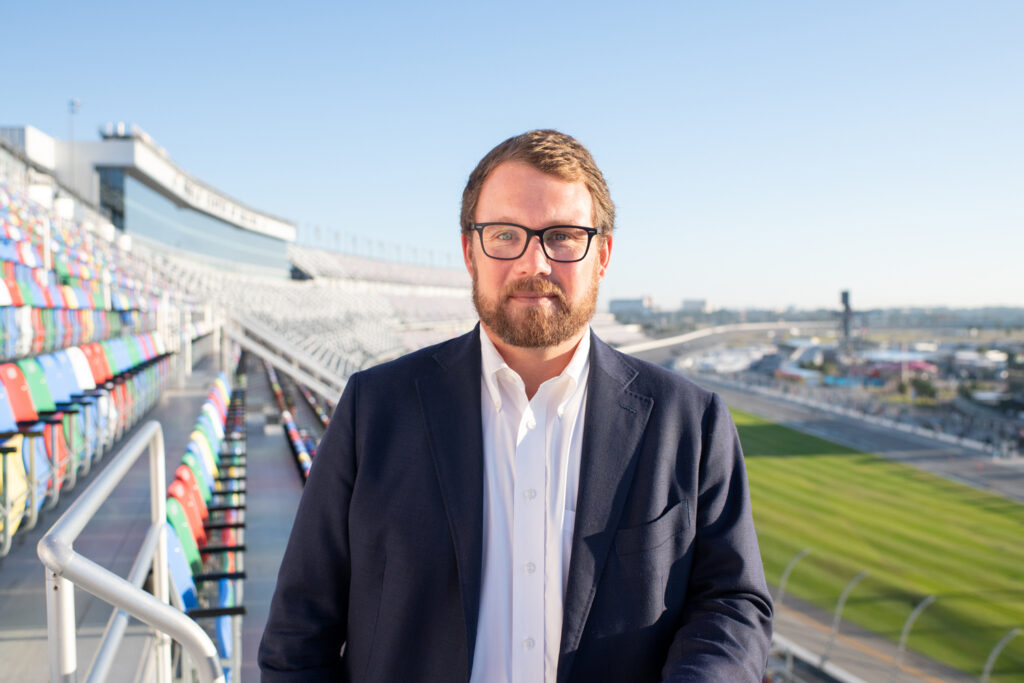 Chip Wile manages more than 100 speedway staff members. In a normal year, the speedway hosts more than 300 events ranging from proms, weddings, and high school graduations to the 24 Hours of Daytona. (Photo by Meagan Scharmahorn)