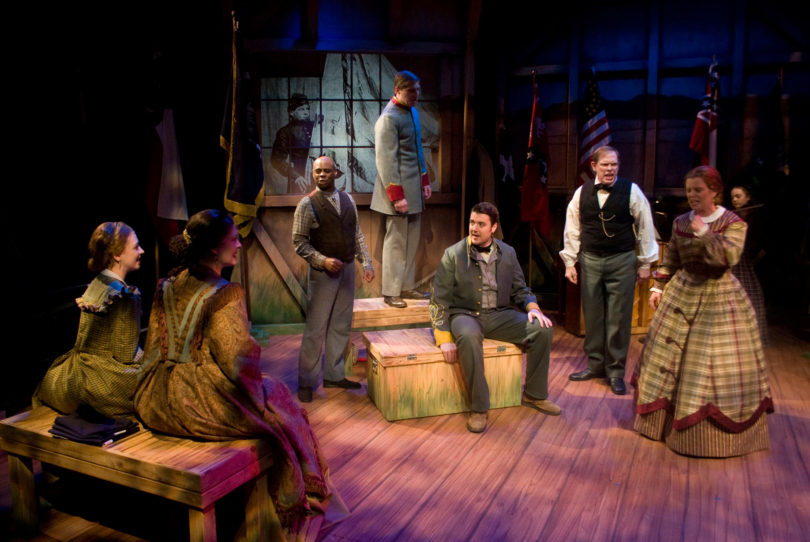 By combining the diaries and writings with music from the era

The Performing Arts Center, in collaboration with the Classic Center, will commemorate the 150th anniversary of the Civil War with Civil War Voices on Oct. 12 at 7:30 p.m. in the Classic Center Theatre. The musical tells the true stories of five individuals who lived through the conflict that changed the nation.

Several years ago, playwright James R. Harris stumbled upon a diary kept by his great-great-uncle, who lived during the Civil War. Harris researched and found other personal recollections: A young couple separated by the war, a freed slave serving as dressmaker for Mary Todd Lincoln and a young professor turned lieutenant. He then created Civil War Voices, combining the diaries and writings with music from the era.

“I have tried to capture the real people, the real songs and, ultimately, the real heart of a country divided,” Harris said.

Virginia’s Barter Theatre, one of America’s oldest professional theater companies, originally produced the musical. Performed in story theater style, 10 actors play multiple characters and stay on stage for the duration of the show. A violinist and a pianist play familiar period songs—Amazing Grace, Dixie, The Yellow Rose of Texas, Didn’t My Lord Deliver Daniel and Battle Hymn of the Republic—woven into the story.

Civil War Voices reflects the struggles, large and small, of both the North and the South, stories not found in history books.

“The really beautiful thing is, by the end of the play, we see that even though it was the North versus the South, we all were so much the same, with such similar human hopes and fears,” said assistant director Katy Brown.