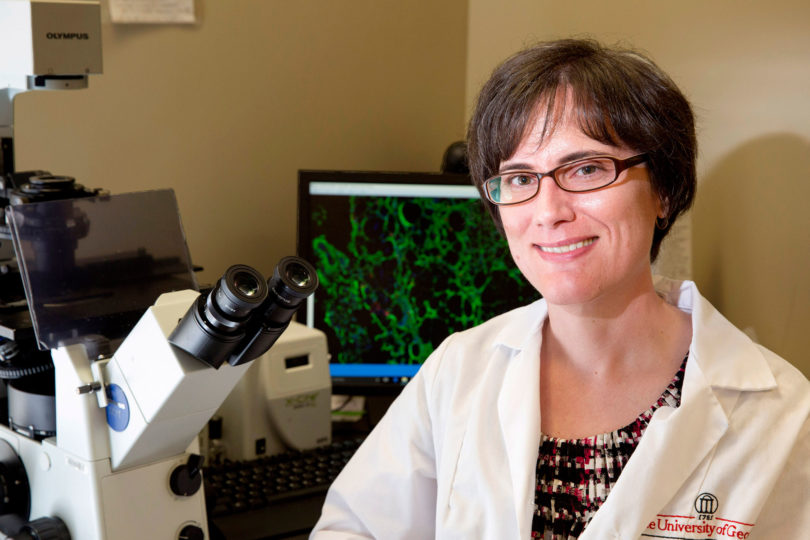 Aaron Beedle's research indicates that rapamycin has beneficial effects for mice with a gene mutation that triggers muscular dystrophy.

UGA researchers have shown that an FDA-approved drug reduces scar tissue and improves muscle function in mice with a gene mutation that triggers muscular dystrophy, a group of genetic diseases that cause progressive muscle weakness and degeneration.

The study, published recently in the journal Skeletal Muscle by researchers in the College of Pharmacy and College of Education, offers insight into potential treatment for a class of muscular dystrophies that includes Fukuyama disorder, a severe form of childhood muscular dystrophy that affects muscle, eye and brain development.

“The focus of my lab, overall, is to try to develop new therapeutic strategies for muscular dystrophy, because there are currently no cures,” said Aaron Beedle, an assistant professor of pharmaceutical and biomedical sciences in the College of Pharmacy who began the study in 2011.

Beedle said she is especially excited about this study because the drug that was used, rapamycin, is already FDA-approved for other indications, making it easier to translate that treatment to humans if it continues to produce solid evidence that it is effective in the mouse model.

“I’m not suggesting that doctors or parents of these patients go out right now and ask for this drug,” she said. “I don’t think we’re there yet, but I think we’re one really solid study away from the point where we could justify suggesting that.”

The idea to use the drug came from Beedle’s discovery that the mTOR protein, part of a pathway that helps regulate the cell cycle, was abnormal in her mouse model. To find out if mTOR was important in the progression of muscular dystrophy, the researchers needed to inhibit its function, and rapamycin is a well-known mTOR inhibitor, used primarily as an immunosuppressant for kidney transplant patients.

The mice showed moderate improvement in muscle stamina when running, and muscle image analysis revealed a decrease in fibrosis, or scar tissue, and fewer new muscle fibers, suggesting the drug may have a protective effect.

“I think a particular strength of this study is the physiological component to it—the treadmill running, the activity cages, the muscle function tests,” said Jarrod Call, skeletal-muscle researcher and assistant professor of kinesiology in the College of Education who collaborated on the study. Call, also a faculty member at UGA’s Regenerative Bioscience Center, used a small, noninvasive machine to measure changes in muscle strength and force over the treatment period.

Steven Foltz, the lead author on the study who conducted most of the experiments and received his doctorate in pharmacy from UGA this past summer, said that he never anticipated working on muscle before. But drawn by Beedle’s enthusiasm for her research, he joined her lab five years ago.

“This is a significant time in the history of the field—muscular dystrophy research is really blowing up,” said Foltz, who began a postdoctoral fellowship at Emory University School of Medicine in September.

Beedle said she has submitted a research proposal to the Muscular Dystrophy Association to conduct additional studies that build on these recent findings.

“If we can generate that kind of an effect in a mouse, would that be possible in a human? That would have a very big impact on the muscular dystrophy field,” she said.