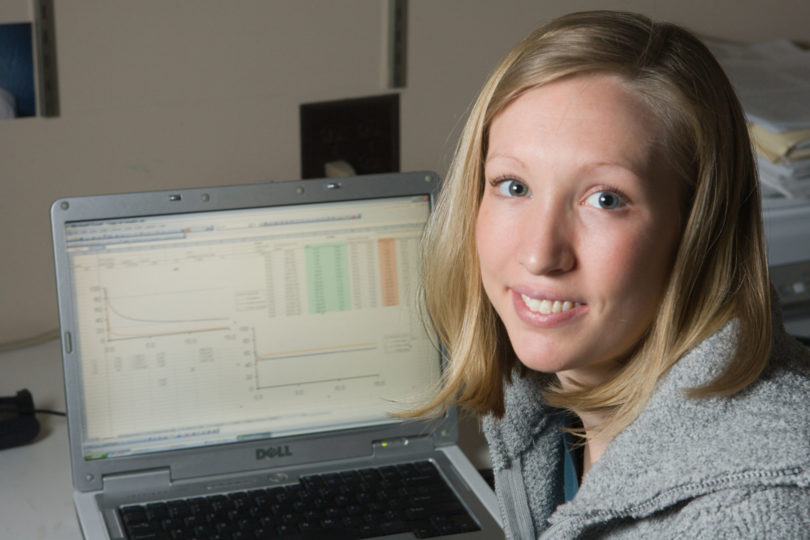 Graduate student Ashley Helton developed a computer simulation model that served as a major breakthrough in determining the effects of nitrogen in whole stream networks.

Too much of a good thing can have disastrous effects.

Nitrogen, for example, is essential for all living beings. However, when you add human contributions-especially fertilizer-into the mix, too much nitrogen is introduced into the biosphere and it can become a devastating pollutant.

A pioneering study on the effects of nitrates, a form of nitrogen, in streams was recently published in Nature, with a team of 31 researchers including major contributions by Ashley M. Helton, a graduate student in the university’s Odum School of Ecology.

The study demonstrated how varying amounts of nitrate are biologically processed in streams.

“Humans have increased the amounts of nitrogen cycling in air, water and land by burning fossil fuels and fertilizing lawns and crops,” said Judy L. Meyer, study co-author and Odum School of Ecology professor emerita. “Oxides of nitrogen emitted from smokestacks and tailpipes elevate nitrate concentrations in rainfall. Nitrogen fertilizers applied to the soil are leached by rain and melting snow and contaminate groundwater, streams, rivers and estuaries.”

And with the push for development of alternative fuels, it is important to note that excessive amounts of nitrogen may be created during the process of producing corn-based ethanol.

“Intensive agriculture to create biofuels will require extra fertilizers which may cause a nitrogen overload,” said Helton. “The findings of this research demonstrate that there is a limit to the amount of nitrogen streams and rivers can withstand, which is a conclusion that policymakers should strongly take into consideration.”

To determine how nitrate is ­processed in streams, scientists added rare but harmless nitrate isotope to 72 different streams across the U.S. and Puerto Rico.

Measurements were taken at varying points to determine how much nitrate was moving downstream. Rather than being transported downstream, most was removed from the water by tiny organisms either by gobbling it up or by a process known as denitrification. During this process, the microorganisms convert nitrate to nitrogen gas that escapes harmlessly into the atmosphere.

These results from field experiments showed what was happening in individual streams, but to be able to generalize the experiments to entire stream networks, Helton developed a computer simulation model. Because the nitrate isotope is so expensive, it is impractical to add it to large streams. Therefore, Helton’s model served as a major breakthrough in determining the effects of nitrogen in whole stream networks.

“Using the computer simulations, we were able to determine what happened throughout the entire stream network when nitrate levels became so high that the stream microorganisms couldn’t keep up with them,” said Helton. “At intermediate nitrate levels, larger streams in the network took up the slack, but at high levels most of the nitrate made it downstream without being taken up. High levels of nitrate reaching the coast may result in areas called ‘dead zones.’ ”

These “dead zones” occur when algal blooms get so large from the overabundance of nitrogen and other nutrients that the bacteria that ­decompose the algae suck the oxygen out of the water.

Oxygen depletion, in areas including the Gulf of Mexico, the Chesapeake Bay and the Baltic Sea, can lead to the death and fleeing of marine animals such as crabs, shrimp and fish.

This can have devastating effects for fisheries, cause great disruptions to migration patterns for species including shrimp and lead to the loss of a suitable habitat for spawning.

“As expected, Ms. Helton’s model suggests that stream networks can cleanse themselves of low levels of additional nitrate fairly efficiently,” said co-author Geoffrey Poole, president of Eco-Metrics scientific firm and Helton’s major adviser. “However, as nitrate levels continue to increase, streams become less and less efficient at processing nitrate and a greater and greater percentage of the nitrate entering streams is exported downstream to lakes and oceans.”

This major scientific finding is essential to fully understand the ramifications of excessive nitrogen. While stream microorganisms can remove much nitrate, the pollution that reaches oceans can have devastating effects.

“Human actions can have large and lasting impacts across the globe,” said Helton. “When we apply too much fertilizer, pollution can move from the smallest stream to the coast of the largest ocean.

“This example makes it easier to see the big picture: that we don’t just affect the area immediately around us, but our impacts radiate across the entire planet,” she added.