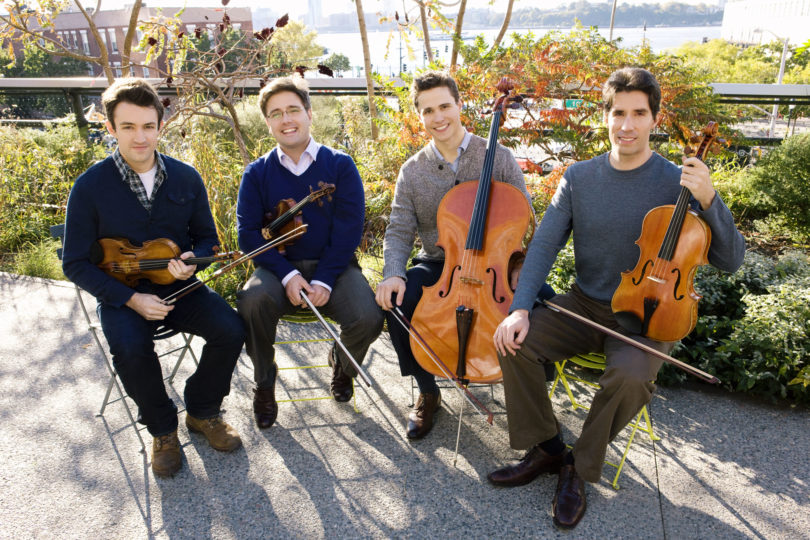 The Performing Arts Center will present the Escher String Quartet with special guest, guitarist Jason Vieaux, Oct. 20 at 3 p.m. in Hodgson Concert Hall. Vieaux joins the Escher Quartet for a program of rarely heard music for string quartet and guitar that will include works by Luigi Boccherini, Mauro Giuliani and Mario Castelnuovo-Tedesco.

Tickets for the concert are $35 with special discounts for UGA students. Tickets can be purchased online at pac.uga.edu or by calling the box office at 706-542-4400.

Within months of its inception in 2005, the Escher Quartet was invited by both Pinchas Zukerman and Itzhak Perlman to be quartet-in-residence at each artist’s summer festival, the Young Artists Programme at Canada’s National Arts Centre and the Perlman Chamber Music Program on Shelter Island, New York. In 2013, the quartet became one of the very few chamber ensembles to be awarded the prestigious Avery Fischer Career Grant.

From 2010 to 2012, the Escher Quartet served as BBC New Generation Artists and gave debuts at both Wigmore Hall and the BBC Proms. Based in New York, the members of the quartet also are artists of the Chamber Music Society of Lincoln Center and have toured throughout Europe, China and Australia.

Vieaux has been hailed as one of “the youngest stars of the guitar world” by The New York Times. He has appeared with symphony orchestras around the country and recently toured Japan with the Cleveland Orchestra. Vieaux already boasts an impressive discography that includes Sevilla: The Music of Isaac Albeniz, which was named to several top 10 classical CDs lists, and Images of Metheny, a tribute to the music of jazz guitarist/composer Pat Metheny, who said, “I am flattered to be included in Jason’s musical world.”

Vieaux is head of the guitar department at the Cleveland Institute of Music and also serves on the faculty of the Curtis Institute of Music in Philadelphia. Last year he launched the Jason Vieaux Guitar Academy in partnership with ArtistWorks Inc. a groundbreaking technological interface that provides a one-on-one online study exchange between Vieaux and guitar students around the world.

The Escher String Quartet and Jason Vieaux concert will be recorded for broadcast on American Public Media’s Performance Today, heard by more than 1.3 million listeners across the country.